By Bob Jensen - June 9, 2020
The summer bite has arrived across Walleye Country. Most species of fish have completed the spawning process and have one thing on their minds: Predators such as walleyes want to eat. If we want to catch more walleyes, we need to determine where they are and what they want to eat. If we do that, our chances for catching them are very good.

Trolling right now and until the ice returns is a good way to find the fish and to figure out what they'll eat. In many states, anglers are permitted to use multiple lines, and the opportunity to put multiple lines in the water allows us to show the walleyes a variety of baits. Showing them a variety of baits will increase the odds of showing them the bait that they want.

I've spent many memorable days trolling for walleyes on Lake Erie in Ohio, Green Bay in Wisconsin, Clear Lake in Iowa, Mille Lacs in Minnesota, and Big Stone Lake on the Minnesota/South Dakota border. And lots of other places. The bodies of water were different, but the technique was very similar: We would use sonar to find areas that held fish, then we would put our lines in the water and start trolling. Sometimes the walleyes were spread out, sometimes they were in pretty tight schools. When we encountered the tight schools, we would troll through them, catch a couple, then turn around and go back through them. 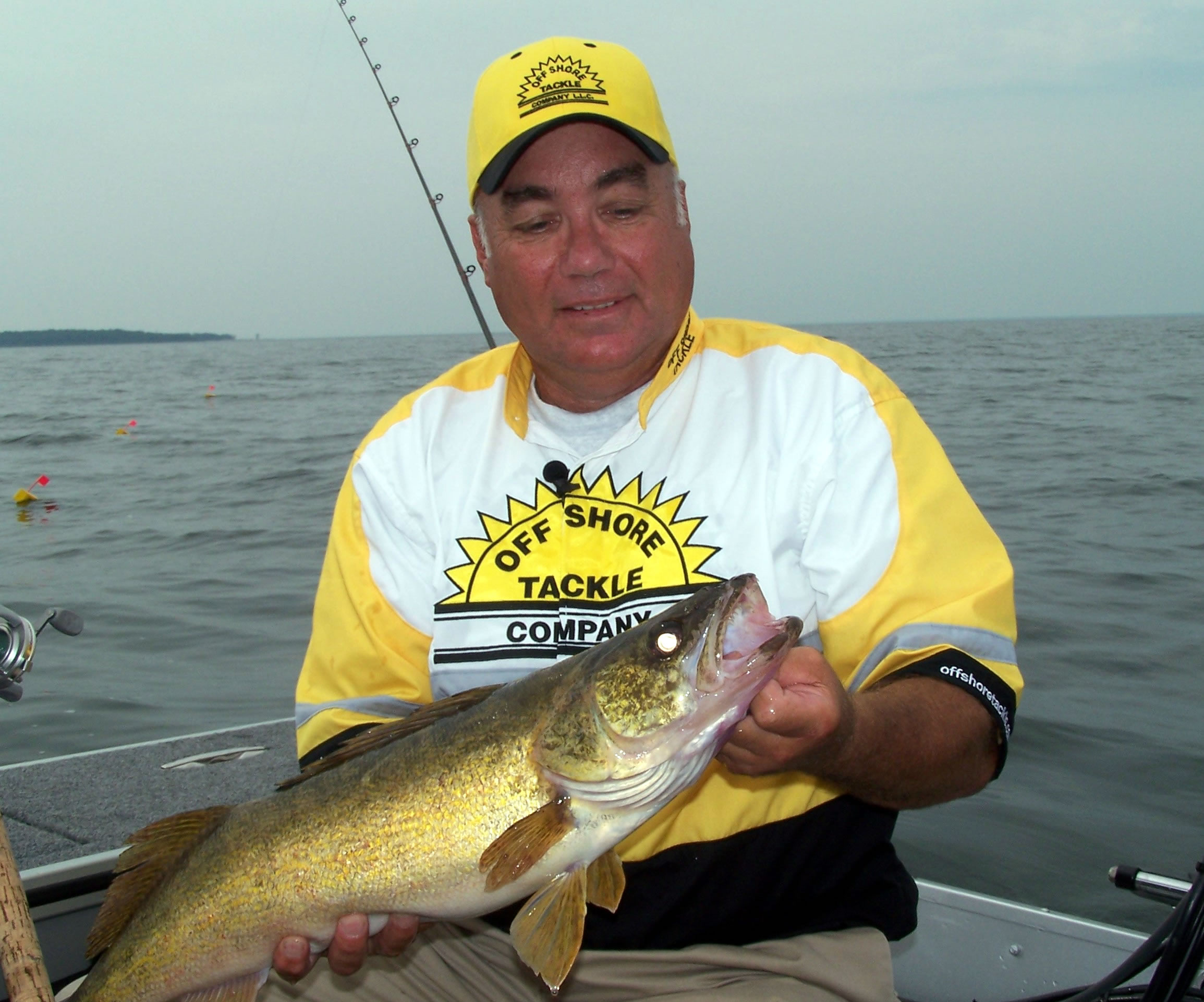 Here's Bruce DeShano with a walleye he took on a crankbait behind a planer board in the middle of summer. Note the planer boards in the water at different distances from the boat.
When they were spread out, we would usually just keep trolling downwind, catching one, catching another maybe ten minutes later, and another a few minutes later. When we quit seeing fish on the sonar, we would reel in the lines and go looking for more. By the end of the day we usually had a pretty nice catch.

Walleyes suspend more than many anglers think. One day on Green Bay I was fishing with Bruce DeShano and Dean Arnoldussen. Both are outstanding walleye anglers. Walleyes suspend on Green Bay frequently. In Wisconsin an angler can use three lines. That gave us the opportunity to get lots of baits in the water. If I remember correctly, we were using seven lines. We were using crankbaits and each one was different. Some ran fifteen feet below the surface, others ran ten feet down. We also used baits of different shapes and colors. We had the bases covered as far as lure selection. As we trolled, it became apparent that the fish preferred a bait that was running fifteen feet down. We tied on more baits that ran to that depth, but we continued to work with color and shape. It didn't take long to discover that on that day, one particular bait style and color was preferred. Once we got that figured out, business really picked up. At one particular point, six of the seven rods had a walleye on it, and these were all nice fish, all over five pounds. Really a productive way to cover water.

In-line planer boards enable an angler to cover a wide area of water effectively and are best when the fish are spread out over a large area. Planer boards take a line out to the side of the boat. Let one line out fifty feet away from the boat, the next out thirty feet, and another out maybe fifteen feet. Do this on each side of the boat and you'll be covering a lot of water. Off Shore boards are easy to use, easy to see, and run true. They're the choice of many of the most successful anglers.

For the remaining open water season, predator fish will be looking for something to eat, and baitfish will try to avoid being eaten. Do the baitfish a favor and let a walleye eat your crankbait next time you go after walleyes.