By Bob Jensen - June 21, 2020
For many anglers, the fishing this past spring has been very good. Some even describe the fishing and catching in the spring of 2020 as outstanding. Now it's starting to feel and look like summer, and the calendar indicates that the summer of 2020 has arrived. The places and techniques that provided memorable fishing for the past few weeks will be changing. Fish behave differently in the different seasons, and if we want to catch fish in the different seasons, we need to change our lure presentations and how we go about catching fish. Following are some ideas for catching fish during the summer months.

A weedline will often be a good place to start. Several species of fish will hang out along the weedline. You'll find largemouth bass, walleyes, panfish, and northern pike on the weedline. If two anglers are fishing, it works well to have one angler throw a crankbait and the other a slower presentation, maybe a jig tipped with plastic. This way you're showing the fish two very different presentations. If the fish are hitting one bait better than the other, both anglers should throw that style of bait. 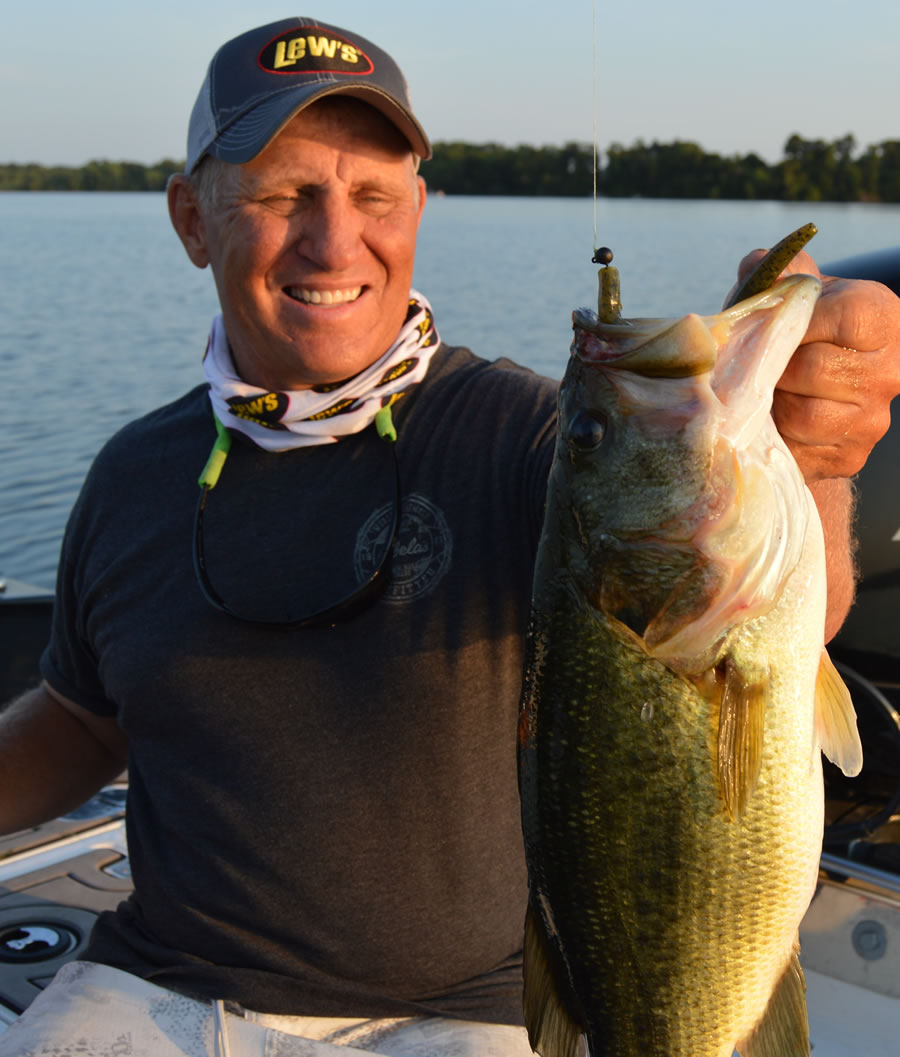 It was mid-summer when this big guy ate an Ocho fished on a jighead. Simple baits catch big fish much of the time.
If you employ this technique, the crankbait angler will do well to match the shape of the crankbait to the baitfish that the target usually eats. Largemouth bass eat mostly shorter, fatter baitfish like bluegills and shad. KVD crankbaits are thicker in shape and a good choice for largemouth.

Long thin predators like walleyes, pike, and muskies prefer perch and suckers, so a crankbait that's longer and thinner, will be preferred. For walleyes and pike try a Lucky Shad. Go even longer for muskies. Regardless of target specie, start with a natural appearing bait in clear water and a brighter, gaudier bait in stained water.

The angler in the front of the boat should throw the crankbait until the fish show a preference. The angler in the back of the boat will be presenting a bait to fish that maybe weren't interested in the faster moving crankbait, but they'll respond to a slower moving bait, something like a jig/plastic combination. Plastic baits come in so many shapes and sizes. Most anglers have favorite shapes for certain situations. When you're just looking to get bit, start with an eighth ounce jighead on eight or ten pound test line. Thread an Ocho onto it. These baits come in a variety of sizes. Start with a five incher. If the action is good, go bigger. If the action is a little slow, size down. In the past few years, when the bite is really tough Ned Ocho's have caught'em when nothing else does. These Ned's don't look like much, but when the fish don't want to get caught, Ned's catch'em.

Sometimes the fish are spread out along a structure, sometimes they're schooled tightly on a specific spot on the structure. On the weedline, look for points or pockets in the weeds to hold concentrations of fish. On deeper structures, a rockpile or a corner on a large flat will hold schools of walleyes, bass, or crappies.

Summer fish like to eat. In fact, that's pretty much all that they do. There will be times when they'll be more likely to eat than others, but if you put the right bait in the right place, Mr. or Mrs. Fish will probably eat it. Most of us go fishing to get bit. In the summer you can get bit a lot.