By Craig Ritchie - June 1, 2020
If we're perfectly honest about it, we anglers are all guilty of what I like to call Hamster Wheel Syndrome (HWS). Because we spend far more time on the water than any sane human being ever would, we've come to realize that fish respond best to things that they've never seen before. It's precisely this knowledge that inflicts us with HWS in the first place. Always hoping to catch a few more fish - including those wise old geezers who've seen it all - we get caught up in always chasing the latest and greatest thing, scouring tackle shops and sports shows and online catalogs, always looking or something fresh - rushing forward to buy them like a hamster on a wheel. HWS drives us to spend ridiculous amounts of money buying up these newly-minted gems so we can toss them at fish before anyone else does. It lasts for a few weeks at best, till inevitably other people start using the same new baits as us. And the outcome is always the same - the fish quickly get used to the new baits and no longer seem to respond, and the whole crazy process starts all over again.

But when it comes to spring pike, you probably already have the next greatest thing already, hiding in a dusty old tackle box tucked away in a corner of the garage. Of course, I'm talking about spoons. 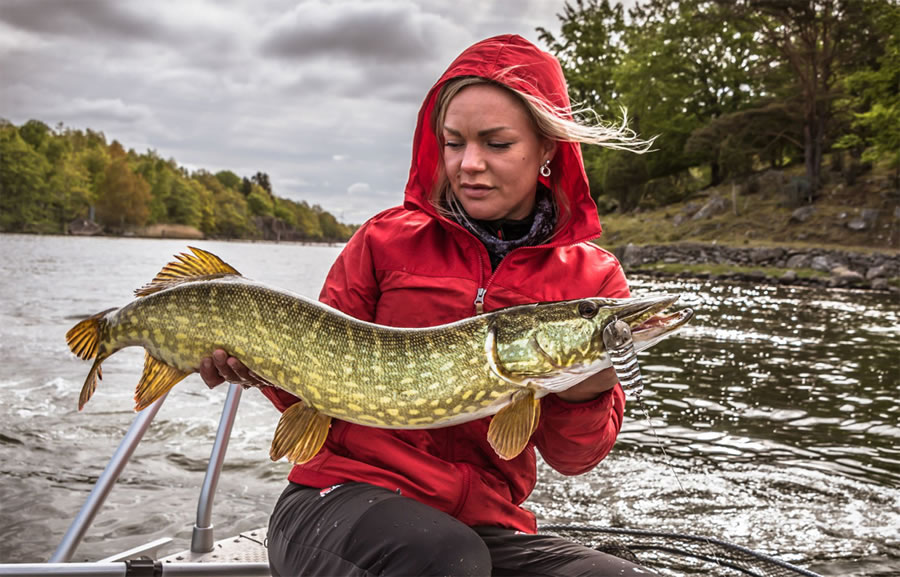 Classic spoons remain one of the most under-used - and effective- options for spring pike anywhere.

No Respect At All

Spoons are the Rodney Dangerfield of fishing lures, in that they never get any respect at all. And that's a shame because they're incredibly versatile lures - especially for spring pike. Yet anglers always seem to give them a pass, looking instead to the big inline spinners, the latest soft plastics, or the exclusive, made-in-Japan premium platinum-plated crankbaits that they paid $40 apiece for at the winter sports show.

No one uses spoons. What this means is that the pike are less likely to have seen the spoons than any other baits you own. That's precisely why the spoon box has been the first thing I reach for any time I head out for spring pike.

Spoons have a lot of things going for them, starting with the fact they cast like bullets. Being comparatively heavy for their mass, spoons cast easily into even stiff winds, and that's always a consideration in May when variable weather is the name of the game. Being able to gain that extra bit of casting distance means more than just a couple of extra fish each year, it means extra comfort and safety on your end since you can keep the boat out over deeper water, and farther away from those shallow rocks and logs. 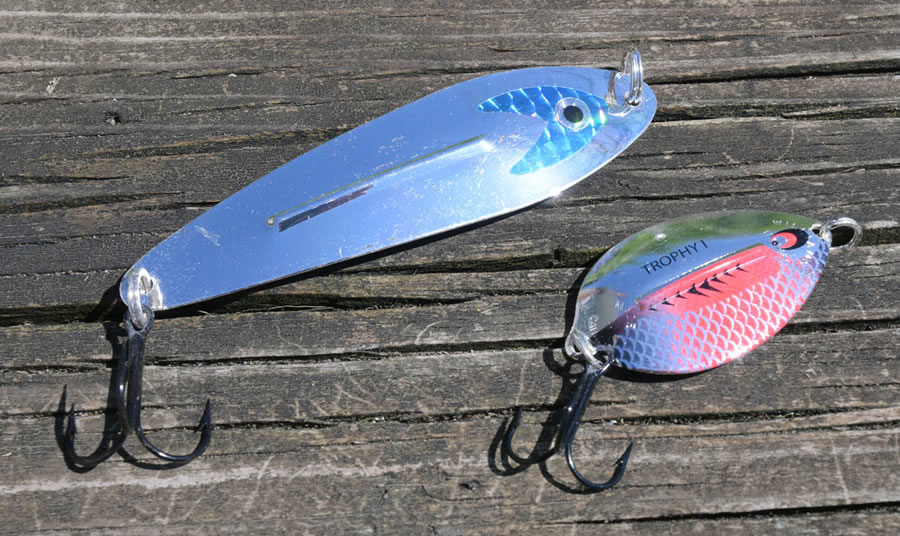 Long narrow spoons (left) are best in deeper waters, while those with wider profiles are better in the shallows, where their profile lifts them above emergent weeds and stumps.

Any Way You Want It

Spoons are masters of versatility, able to be fished fast or slow, deep or shallow, aggressively or passively, all by how you hold the rod. Hold the tip up high and crank on that reel to work them right over the tops of emergent weeds or even just under the surface as you reach out to cover water and find scattered fish. When a cold front slows the bite, slow down your retrieve, point the rod tip at the water and crawl the same spoon right over the bottom rocks at a leisurely pace pike may find more attractive.

A good spoon box will include models of various lengths, in both wide and narrow profiles - wide spoons work best in shallow waters, where they're less likely to dig in and snag on bottom, where the narrow willowleaf styles get down deep with little effort. For spring pike I carry a range of sizes, from about three inches in overall length to perhaps six inches on the upper limit. Because spring forage tends on the smaller size, I find the standard four-inch spoons tend to work the best.

One benefit to spoons of all sorts is their high hook-up percentage. The thin steel body of a spoon slides right through a pike's teeth on the hook-set, even way out at the end of a long cast so you never miss a fish. They also stand up to all sorts of repeated chewing, unlike soft plastics or even some crankbaits. That can get expensive after a couple of good days on the water. 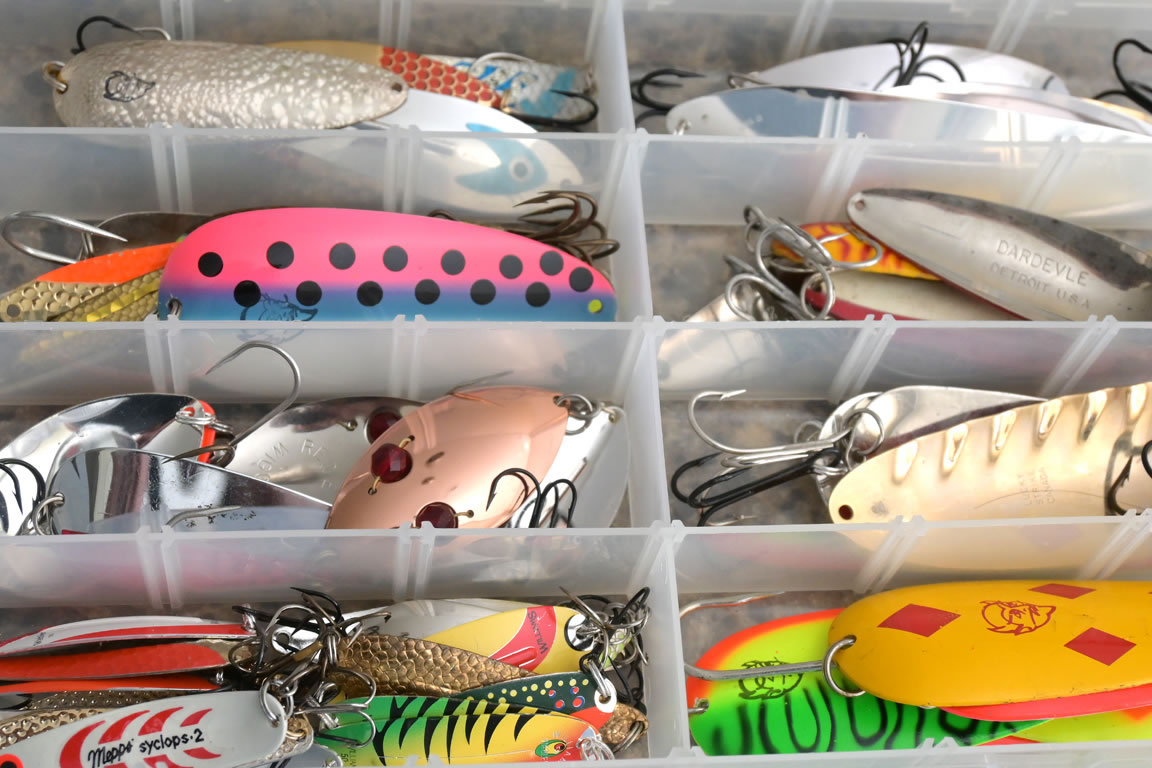 A good spoon assortment includes a range of sizes, finishes and profiles to deal with any imaginable water conditions.

Spoons come in all sorts of colors and finishes, but I've found that in clear water it's pretty tough to beat classic chrome silver, as it so closely mimics a wounded baitfish. I'll generally save the brightly-painted spoons for shallow, sandy shorelines, where wind action can stir up a bit of sediment and make baits harder to see.

I begin a day of pike fishing by approaching the shallow bays where they spawn, working along the shorelines that get the most sun. First stop is always the same - that first bit of structure than connects the shallow spawning bay to the deep water of the main lake basin. This can be a steeply-breaking shoreline, a long point, or the water between a set of islands bridging the shallows with their deep mid-summer hangouts. I fire those first casts out over fairly deep water, starting deep and slow, then gradually picking up the pace and running shallower in the water column.

If no fish come out to play, I move a bit closer to the spawning bay and try again, repeating the same pattern. Then, I'll move again and repeat. I may start fishing in about 25 feet and wind up in 3 feet, but at some point I'll find that magic depth where the fish are hanging out. Once you find that, the rest is easy.

After you catch a bunch of fish and the action eventually dies down, you can move to other similar locations nearby and usually continue to catch fish by using the same retrieve at the same depths that were working before.

And that's the beauty of using spoons for spring pike. It's easy fishing. It's productive as can be. And since you probably have a box of spoons somewhere already, it save you some money from another case of HWS.

This spring, dust of the old spoons and give them a try for shallow-water pike. You might just find yourself wondering why you haven't used them in so long.