Spoons Through The Ice

By Bob Jensen - February 17, 2020
When we go out on the ice in search of fish to catch through the ice, much of the time, we just want to get bit. If the perch want to eat our bait that's good: If a walleye or crappie is in the mood, that's a good thing too. Walleyes and crappies and perch are certainly different fish, but one lure that will take them all is a spoon. They really like spoons. However, spoons have different characteristics that we need to consider to increase the odds of getting a fish to eat that spoon. Here are some things that you should keep in mind when using spoons under the ice.

Is the water clear or cloudy? In cloudy water, a spoon that is bright in color will attract more fish. Spoons that glow really make a difference much of the time in stained water. Keep in mind that glow spoons need to be recharged for a few seconds every now and then. The Glo-Ring that attaches to Vexilar units makes recharging simple and quick is a very nice addition to your sonar. 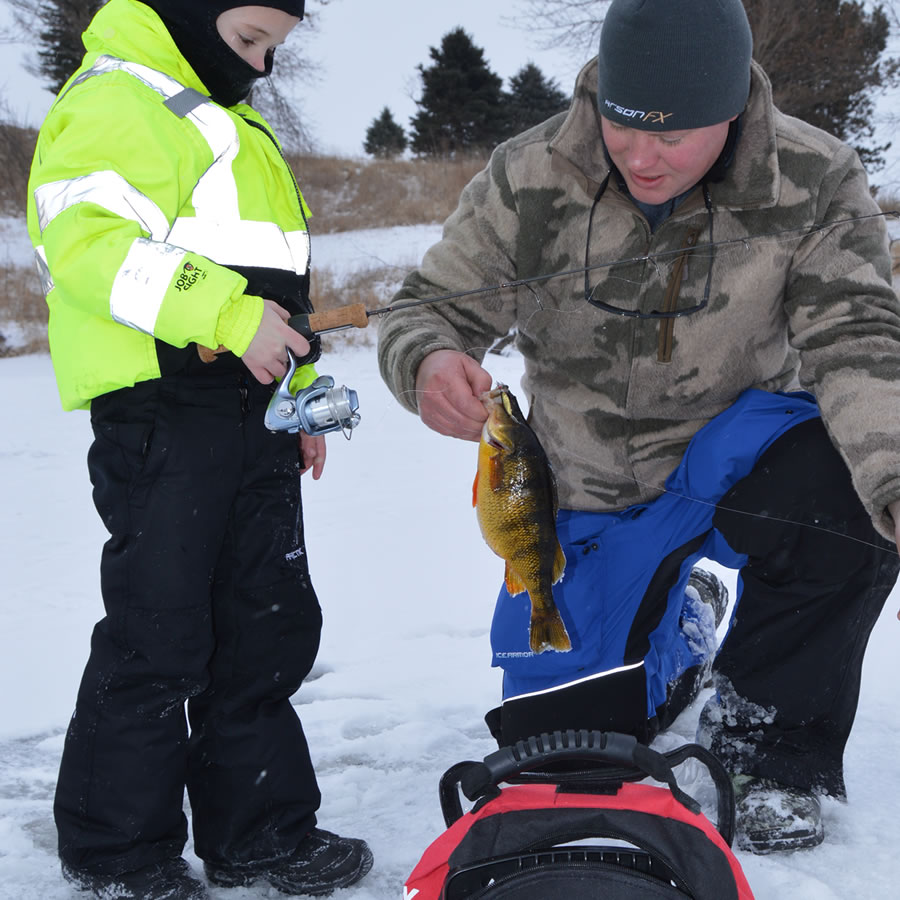 Rex Clark and his dad teamed up to catch this jumbo perch on a spoon.
In clear water, a subtle or metallic color will be preferred most of the time. As always, if the fish aren't eating what you're showing them, show them something else. Spoons that make some noise will also attract more fish. Again, we need to get the fish's attention, and noise will do that. Some spoons have rattle chambers that do that, but something fairly new has really been stirring fish up in stained water. It's a spoon called a Pinhead Mino. It has a small blade between the spoon body and the treble hook. The spoons spins and wobbles, and that helps attract fish, but it also clicks against the hook. That clicking sound is different than the fish have been hearing, and it's been making a real difference. nice addition to your sonar. 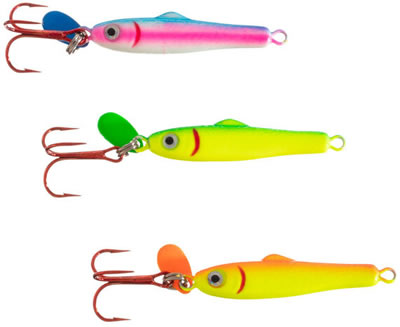 The Pinhead Mino.
Consider water depth. Some spoons sink quickly, others flutter to the bottom. In shallow water, often the fluttering spoon will be more productive. The material used to create the spoon will determine if it flutters or plummets quickly. The Leech Flutter Spoon does exactly what the name indicates: It flutters to the bottom because it's made of zinc alloy. It wobbles and flutters as it falls, and lately shallow water fish of all species have really been liking the fluttering. Another merit of the Leech Flutter Spoon is that it has a feathered treble which is a good substitute for a minnow head. With the minnow head, if a fish takes a whack at the spoon and misses but knocks the minnow head off, it probably won't come back. With the feathered treble, if it misses, the chances of a return trip to your spoon is much better. nice addition to your sonar. 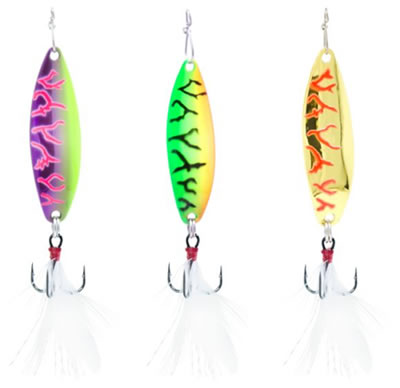 Leech Flutter Spoon
When the fish are deep, say over twenty feet, the Pinhead Mino style will be better. It's a slim profile so water resistance is minimal. Walleyes and perch will usually be on or very near the bottom, so we want our bait to get to the bottom quickly, and that's what a spoon of this design does. This design is also better when the fish are finicky.

Regarding line size: John Crane, an ice-fishing guru and friend once told me: If you want to get bit, go with 6 pound test line. If you're on a lake with a good population of big fish, go with 8 pound test. If J.C. suggests that, that's what I'm going to do.

Spoons are good open water baits, but they're even better when fished through the ice. Give the proper spoon a try next time you're on the ice and find out for yourself.