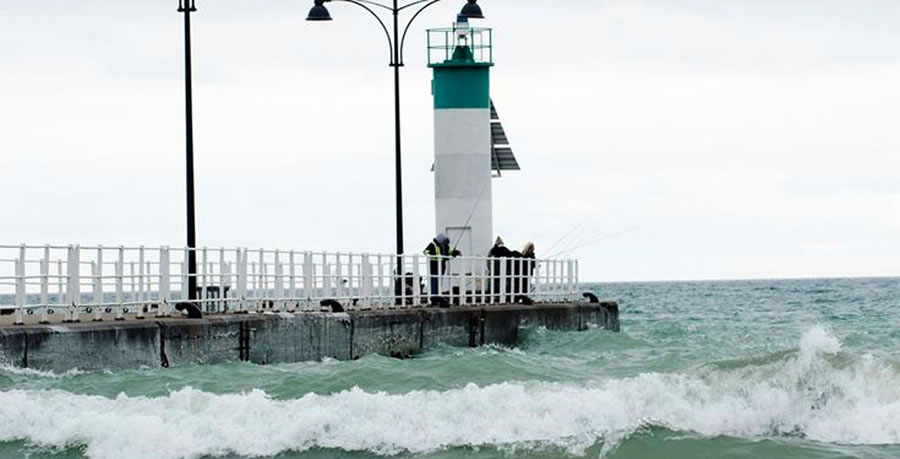 Throughout the Midwest, the back-end of winter can be a frustrating time of year for anglers. By the second half of February ice fishing tends to slump, as fish disperse throughout lake systems with no real reason to concentrate anywhere. That hot first-ice action is by now a memory, yet the furious last-ice bite has yet to begin. For ice anglers, February is the big in-between.

Throughout the Midwest, the back-end of winter can be a frustrating time of year for anglers. February is a good time to sort tackle and prepare for the coming season, but it's an even better time to hit the mouths of rivers flowing into the Great Lakes and getting a jump-start on spring steelhead.

By this point in the year the days have already begun growing noticeably longer, and it is this greater duration of sunlight that sends steelhead in search of spring spawning sites. In a typical winter fish begin showing up off the river mouths as early as Valentine's Day, far earlier in the season than most anglers might ever expect. Encouraged by the strengthening sun and occasional tastes of snowmelt on particularly warm afternoons, they begin staging at the river mouths and in harbour areas, with more and more fish arriving every few days. Although the absolute numbers of fish are still well below what you'll see in these spots a month from now, you'll generally have them all to yourself.

In the chilly water of late February and into early March, you'll want to fish slowly for these relatively inactive fish. Because the fish are likely to be spread out over a broad area, I like to fish with hardware, and cover water by fan-casting as I wade along or walk the length of a shoreline pier. Slow-moving lures that generate a lot of flash and vibration are the best bet, topped by old standbys like the Worden's Flatfish, Luhr Jensen Kwikfish and Luhr Jensen Hot Shot. Go with lures in the two-inch range, which are admittedly light in weight and difficult to cast if there's any sort of wind - adding a split shot or two about 18 inches up the line helps. Select natural finished lures in clear water, and save the bright gaudy hues for after a rain or extended snow melt has muddied things up a bit. Simply cast and retrieve, covering water, and you should connect with fish before long.

Inline spinners with wide blades, like the Mepps Aglia and Blue Fox Classic Vibrax, can also be deadly on jump-start steelhead. The wider blades allow these lures to be fished slowly, making them far more effective in the cold water. Save the more slender willowleaf blades for later in the season, when things warm up and a faster presentation in more prudent.

Many anglers like to fish river mouth areas with bait, either directly on bottom or suspended below a float, but I prefer to save that approach for later in the spring when there are more fish around and they're a bit more concentrated. In February, I find I catch more fish on hardware simply because of its ability to cover water. I'll start switching to bait in March once steelhead begin to really stack up, and focus on bottleneck areas such as any bends in the river channel as it flows out into the lake. Until then, it's just more efficient - and productive - to fish slowly with hardware.

Instead of sorting tackle while waiting for last ice, take advantage of this great opportunity to get a jump-start on early steelhead. The fishing can be surprisingly good, and best of all, you'll generally have them all to yourself.