Where Are The Turkeys?

You received your permit for Spring Turkey hunting for the 5th time period,not your first choice( you wanted that first season),but at least you have a chance to hunt,right? After receiving your approval notice, you contact the landowners,notify them of your season, and setup some scouting trips. You wanted to scout closer to your season, but the landowner has other hunters out before your time period, so the scouting is limited to before the first season. Thats okay too, you tell yourself! After all the last couple seasons you scouted the birds before your first time periods and basically the birds were in the same location! The night before your hunt you go out to roost some birds, but what happened NO GOBBLING! Did all the birds get shot by the other hunters? The next morning you try anyways, again no birds, but whats that sound? In the distance you hear faint gobbling on the neighboring land down in the bottoms by the green fields. Did the early hunting pressure drive out the turkeys? #?**^ those other hunters, and ***#^& the DNR for giving me a later season!

Because turkey hunting in Wisconsin is a relatively young sport, and most hunters usually only get to hunt for 5 days, during the same time of year, you can't aquire much experience! After hunting 1st, 2nd, or 3rd seasons your turkey hunting career, when the DNR throws you a curve, with the 5th or 6th season, your learning all over again! In this article I will try give a little more insight in location of Toms during the course of the season, or as Knight & Hale call it "transitions".

Early Location in March & April
Most Turkey hunters start scouting in late Feb. or early March. At this time of year in Wisconsin, on a "normal winter" we have snow cover, and food supplies are scarce. Its still cold, so you and your hunting buddies drive the backroads, glassing for birds. Lo and behold you come upon a field where a farmer has spread fresh manure, and its loaded with Turkeys, What a great season this is going to be! At this time of year it's not uncommon to see flocks of up to 100 birds in these fields, because this is basically the main food source. With snow cover keeping birds from scratching for seeds, and mast crops, the waste grain in manure is an easy food source for turkeys. But don't become overly optomistic, survival is the name of the game now, and flocks can come from a long ways to capitalize on available food! These birds will disperse from big flocks by hunting season, and could be a mile or so away by April. Of course any scouting is going to be of value, and its a great time of year to get out of the house to see big flocks of turkeys. You can also get pictures, or video of that trophy tom ,tripping over that long beard in the snow, and dream of months to come!!! At Last,APRIL!

Typically, in April , the snow is gone for awhile, the days are longer, and warmer, and depending on the severity of the winter, food supplies are changing again. So on a nice warm day in early April, off you go on another scouting trip! Its too cold, and too early for any field work yet, no green buds yet, no bugs. Ahh, farmer Brown is spreading manure , thats where we'll look again for turkeys. Whats this no birds? Did the winter finally finish them off? What happened is that, especially on a winter with early and deep snow cover, the mast crops, became too deep in the snow before they could be cleaned up. Now if I was a turkey, and had the choice between waste grain in manure, and hi-protein acorns, I would head for the woods.This is why some springs suddenly turkeys seem to dissappear in late March, and early April, they are scratching for mast crops in the hardwood ridges, and are only visible by their sign. Of course this can change each spring, depending on the winter, but if turkeys suddenly are absent after snow melt, check the hardwoods for scratchings, and other sign.

Now we get into mid to late April,Opening of Turkey Season! Now we start to see flocks of birds together, with Toms strutting , and fighting for the right to be "boss". At first season birds are usually in big groups, depending on the type of spring, with the hens being very vocal, but usually uninterested in breeding. As usual the boys, or toms are ready before the girls, so much strutting, and gobbling can be heard, and also fighting to establish a pecking order can be seen! Usually due to uninterested females, and a good supply of uneducated Jakes, and 2 year olds( same as teenage boys) its easier to call in a bird in the first season. This coupled with the fact that its harder to overcall, because uneducated birds are more vocal now, many hunters think this is the ultimate season! But while this is great time to hunt(anytime is a great time to hunt!) it can go downhill fast as the hens start breeding with toms, and adult gobblers become "henned up". If a tom is gobbling, and displaying with hens in an open field, chances of him coming to your "hen talk" are slim. What he is gobbling for is to bring the hen out to him. Your only chance now is to find a 2 year old or Jake without hens, or wait until after 9 am or so when the hens go off to nest. With farmers starting to work fields, and mast crop being depleted, look for Toms strutting in picked cornfields, or pastures, at least until it starts to "green up" or bugs start to appear!

May, Spring is Finally Here! 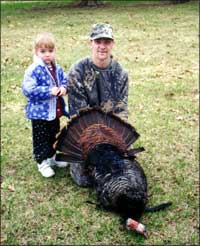 Usually May consists of the 4th,5th, and 6th time periods for Spring Turkey hunting. Screwed by the DNR again, I got a later season. This is the sentiment held by many Wisconsin Turkey Hunters, but only the novices to Turkey hunting hold this opinion. First, let me give you the obvious disadvantges, less birds.If your hunting area is heavily hunted, the less experienced Jakes, and 2 year olds, could be harvested early in the season, leaving smart,wily, "BOSS TOMS", to contend with. Also the temps can be quite warm later in the season, causing alot of "cuttin" and "runnin" , to become "hot " work. This is can be "prime tick season", so protect yourself from these little critters as well! Now, the reason I prefer later seasons in Wisconsin, as do most veteran turkey hunters. First, it can be warm, but hopefully we are done with snowstorms, and spring rains, and the greening up of the woods offers more concealment to approach closer to the birds! Second, hunting pressure is lower, which can be of help on public lands.The main reason later seasons are better, is the fact that more 3&4 year old long spurred Toms are harvested during the 5th season in Wisconsin, than any other season. The cause of this? By the later seasons the hens, which have been with the gobblers since March, are now absent! Hens are usually bred, and setting the nest, away from all other turkeys, by this time. Again just like us men, we are still ready to go , but the women are not. So this absence of female companionship, can cause even the wily ,old, Boss Tom, to make a mistake, as he becomes more desperate.During this time, it is common to see Toms, in open fields, or pastures, in mid day, gobbling, and strutting, for hens that aren't there any more. Of course these birds did not get this old by being stupid, so at this time of year, calling sparringly, and unlike early season using only one or two decoys, can be the trick! In early season birds are in large groups, so you can't use too many decoys, but as the season progresses, birds are not only by themselves, but they may become decoy shy. I use a Jake and Hen decoy, or if I setup in the woods, just a Jake decoy. If the Tom comes and sees a lowly Jake after the last available hen, you can guess what happens next!

Location for food sources changes at this time of year. Birds that were hitting hardwood ridges, and picked cropfields, are now working growing hayfields, and pastures for hatching insects, and budding grasses.Also increased farm activity in cropfields(tilling and planting), and milder, warmer weather, can cause turkeys to change their roost areas, to trees closer to pastures, and field in bottom areas! This is the reason why so many early season turkey hunters,lose the birds in the later seasons!

Well, I hope I have given a little insight into the seasonal changes, or transitions, that the wild turkey goes through in Wisconsin. Hopefully this will give those hunters who received a later season an idea of what to expect if it is their first time hunting the "Prime Time". Practice up on those Primos Turkey Calls, pattern your shotguns, and remember constant scouting is a key to success. If your hunting in Zone 17, maybe I will see you in the woods!!! Until next time, Good Luck in the Great Outdoors!!!

Gilbert Arndt
Besides being Field Editor for Lake Puckaway on Lake-Link.com, Gil Arndton the Primos Pro-Staff, a freelance outdoor writer, videographer and hunting and fishing guide, with almost 20 years experience hunting bears. Gil owns and operates Lone Wolf Guide Service & Outdoor Videography which offers bear hunts, turkey hunts, waterfowl hunts, fishing on Lake Puckaway, as well as videotaping hunts, fishing ,or promotions for outdoor products or businesses. You can contact Gil at (920)394-3138, or email at [email protected].
BITS & BITES
Advertise here
Advertise here
Please take a moment to visit our sponsors. Without them we would not be here.