By Noel Vick - March 1, 2001
"If there's a single piece of ice fishing equipment that will double your catch, it's portable sonar."

Good stories make good lead-ins. And during a recent interview with On Ice Tour's Chip Leer and Tommy Skarlis, Chip broke into the following… "I was winter guiding on little northern Minnesota lake. Our crew was after crappies and it didn't take us long to find fish suspended in 35-feet of water. 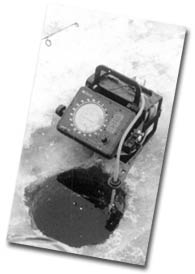 While unpacking the gear I noticed we were short a flasher. Being the guide, I volunteered to go flasher-less. But one of my guests demanded that I use a flasher and that he would go without. After some discussion, I agreed.

The crappies were on fire! Everyone in the group, aside from Mr. No Electronics, was seeing fish 20-feet down, dropping down to them, and hooking fish. I figure he was out-fished at about a 10:1 clip - the guy got his clock cleaned." They go by the names of depth finder, fish finder, and sonar. In essence, all forms of depth and fish finding electronics are considered sonar because they utilize sonar technology. In modern day fishing there are two categories of sonar: liquid crystal graphs and flashers.

Liquid Crystal Graphs
Think of these as the sorts commonly used on boats. Typically wide screened, liquid crystal graphs (LCD's) are employed to acquire depth and bottom contour as you motor across a location. The "picture" is in turn "printed" on its liquid crystal screen. But they stink on the ice. LCD's aren't designed to operate in subzero temperatures. Most are cumbersome to transport, which doesn't bode well for mobility. LCD's are terribly inefficient users of battery power. Serious modification is often necessary to retool a LCD for winter operation. And their greatest shortfall is the realized time delay before images actually appear on the screen.

Flashers
Flashers are your best choice. Flashers have reached a point where they're being designed and packaged specifically for modern ice anglers. Like a LCD graph in the summer, portable flashers show depth, fish, bottom-content, and structure. But that's where the similarities end. On the ice, flashers offer something no other piece of electronics can. They provide a 100% real time (instantaneous) reading of what's happening beneath your hole. Their concentrated power is capable of simultaneously marking your tiny jig and the fish that's about to eat it.

Ice anglers have a choice between two types of flashers, LED and liquid crystal. LED (light emitting diode) flashers are the originals. Motor driven, their back lit circular faces represent objects in one or three colors. The Zercom ColorPoint is a fine example of a three color LED flasher. There is a company who takes the positives of liquid crystal and puts them in a flasher built for cold weather use. Zercom uses military grade liquid crystal in their portable flashers, and this stuff doesn't freeze. Another upside of liquid crystal technology is that motors aren't needed, thus providing six times the battery life of motor driven units. Zercom's portable LCF-40 is the latest and greatest in liquid crystal flashers.

A Day in the Life of a Flasher
To illustrate the importance of sonar we've reconstructed a usual afternoon on the ice with On Ice Tour's Chip Leer and Tommy Skarlis…
Sonar plays a major role in the initial search. The boys are fixing to catch a mess of early ice perch. They arrive in the general vicinity of a gravel bar that extends from a shoreline point. The ice is fairly lean but solid at a thickness of 8-inches.

Tommy breaks out his flasher and starts taking depth readings before cutting any holes. By pouring a gulp of water on the ice Tommy's transducer is able to fire through the ice and report depth. When ice is particularly clear it's possible to see fish, weeds, and even determine bottom composition. Later in the season, profoundly thick, slush covered, and/or layered ice may be impenetrable. Tommy found the breakline he was after. He sets down the flasher and begins plugging holes - lots of holes. This is where Chip and his ColorPoint enter the mix. He follows Tommy up by testing every hole. His ColorPoint unveils depth, bottom content, breaks, and even a few fish...

Bingo! Two or three holes down the line, Chip contacts a batch of perch. He signals Tommy and continues moving along, graphing, but not angling. Tommy runs over with his jigging rod and LCF-40. Sure enough, his flasher displays numerous black bars cutting just above the bottom - they must be wily perch.

Tommy drops down and watches for a reaction. He pauses the jigging spoon - visible as a slender bar - a foot above them. Jiggle. Two thick bars rise and draw nearer. The incoming bars appear to merge with his spoon. A tug. Tommy sets and reels in a sizable perch. A quick re-bait and he's back down. Another fish rises to greet his spoon. A merger, but Tommy feels nothing. The unification of bars continues so Tommy gives the rod a snap. Hot damn! A perch had inhaled his spoon without twitching the rod. Tommy wouldn't have suspected anything had he not been toting a flasher.

It's time for Chip to rip some perch. With rod and ColorPoint in hand, Chip returns to a hole that had shown fish. Plunk, down goes the transducer. Where'd the fish go? Suddenly, he notices an orange bar separate from the bottom, but just barely. Fortunately, his ColorPoint is able to recognize the subtlest gap between two objects, in this case, the distance between the lake floor and a perch's belly. Chip stalls his spoon three feet above the "flicker", aiming to provoke the fish. It responds with vigor - it's ON! Chip was able to determine the fish's mood by how quickly it attacked the spoon. Tommy's hole cooled down, so he moseyed over to another. While taking a depth reading he noticed that the bottom line weakened, signaling a change in bottom composition. He had gone from gravel to mud or clay in just a few paces. Additionally, Tommy's LCF-40 displayed a cluster of faint-flickers just off the bottom. Baitfish? More than likely.

As modern ice anglers, we no longer have to rely on instinct and guesswork. Cutting edge portable flashers are able to show us depth, structure, bottom content, fish, forage, and even our lures. The time has arrived for ice fishing electronics to be considered as standard as rods, reels, heaters, and fish houses.