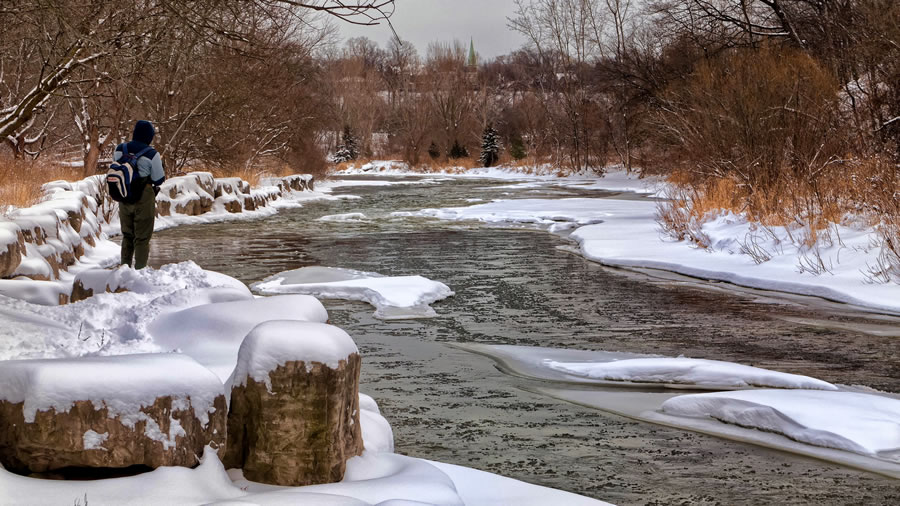 Among anglers, the arrival of that first blast of snow and those first nights below freezing can mean vastly different things. For those who enjoy pursing warm-water species like bass and panfish, ice on the driveway means it's finally time to put the boat away for the year. Muskie and walleye anglers will grit their teeth since those last few trips will be awfully cold. But for die-hard trout anglers, that first blast of wintry weather means it's time for some of the best steelhead action of the year.

Steelhead fishing usually kicks off in mid-September when the first fish arrive off the mouths and in the lower sections of rivers flowing into the Great Lakes. These early arrivals are often smaller, immature fish - "silver bullets" named as much for their coloration as their speed when hooked. By mid-October more and more fish arrive, including larger adult trout that can really challenge the angler's skill. But the best fishing of all happens after the first snow arrives, chasing casual anglers home for the season so that the serious steelheaders who remain often have the streams almost to themselves. It's also when some of the biggest fish of the year finally come in from gorging themselves in the open waters of the big lakes.

I'll be the first to admit, wading through the snow to go trout fishing takes a bit of getting used to. But for those who are willing to dress for the weather, the rewards can be very great indeed.

Fishing for winter steelhead is a bit different than fishing for them earlier in the season. Because fish are cold-blooded creatures, you have to adjust your approach as the temperatures plummet

For starters, there's absolutely no need to be on the water for the break of dawn. That's when both air and water temperatures are at their absolute lowers, and steelhead will accordingly be at their least active. Unlike earlier in the fall, this is the time to sleep in a bit, and hit the water later in the morning after the sun has had a chance to warm things up.

Because the fish are less active, you'll want to concentrate your efforts on slow-moving, deep pools where the fish can hold without exerting much energy to stay in place. It's patient fishing, forgoing fast-moving presentations like chucking hardware or swinging Spey flies for more deliberate techniques like driving natural baits right on bottom. For fly fishermen, this is the time to dog out those weighted nymphs and dredge the depths. Or, fish with weighted minnow patterns like moderately-sized Clousers.

One challenge with winter steelheading is dealing with the slush. As the temperature rises toward mid-day, rivers often become increasingly slushy, making drifting difficult. Worst of all, the slush tends to stick to your line and clog in the rod's guides. One tip from old-time river rats is to use a Q-tip to apply a thin layer of Pam or similar cooking spray to your guides before heading out, which keeps the slush from getting a grip and clogging the guides. 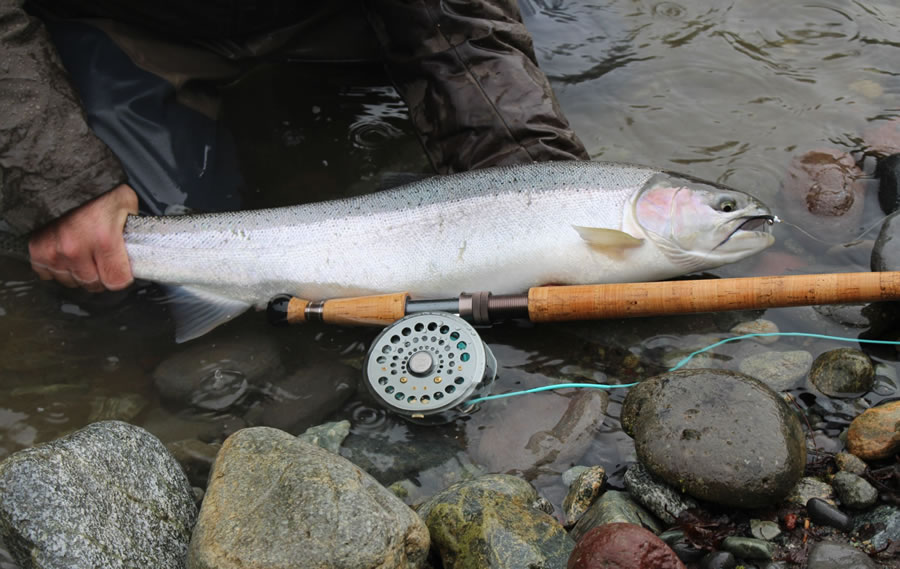 Eventually winter's grip begins to seal most of the slower pools with ice, bringing the river season to a halt on all but the largest flows. That's when you either move to larger rivers that tend to stay ice-free longer, or fish the lakes themselves at the river mouth. And deep, slow presentation will work, and you'll likely bump into bonus lake trout, brown trout and salmon from time to time as well. The easy approach is to wade out off the river mouth and fan-cast, using slow retrieves with deep-running spoons, spinners or minnow-imitating crankbaits. Banana baits, like the fabled Flatfish, are also perfect for this cold water game.

As always, safety first - keep an eye on the weather, and pack it up if the conditions deteriorate.

But put in your time and the rewards will come - big, thick-shouldered steelhead in mint condition, with the water pretty much all to yourself.