By Bob Jensen - November 13, 2019
Ice has arrived on the ponds and small lakes earlier than usual in the northern areas of where people go ice-fishing. In fact, there are some places where anglers are already on the ice and catching fish. Ice-fishing action can be good all season, but it seems like anglers get really excited about early ice, and ponds and small, wind-protected lakes are the first places to offer early ice-fishing. These bodies of water are often home to lots of panfish, and many early ice-anglers target panfish. If you're an early-ice person, the following ideas might help you achieve more success on your early-ice panfish adventures. 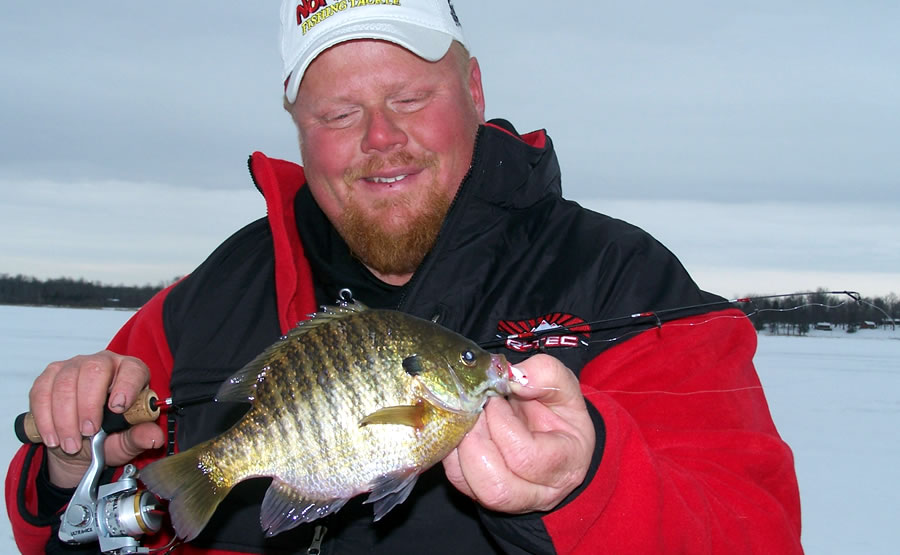 Brian Brosdahl with a big bluegill that he caught on a tiny jig.
First thing, and this is so important: Make really sure the ice is safe. You don't need to be the first one out there. If there are other people on the ice, and if they're bigger than you, you should be okay. Still, it's a good idea to wear a life-jacket on early ice. Cabela's offers inflatable vests that are comfortable, you won't even know you have it on, but they'll keep you above the ice if something bad should happen. However, don't put yourself in that situation. Some folks say that "the ice is never safe", and while that may be true, there are times when it's more reliable than other times. Just do all you can to be on safe ice.

We're going to be walking to our spots, so you'll want to keep equipment to a minimum. Early ice is one of the times when anglers really appreciate the new generation of ice-augers. Augers such as the K-Drill are powered by an electric drill. These are so much lighter that traditional drills, and the new batteries will enable you to drill as many holes as you need. One small box of jigs and some waxworms or spikes, one rod/reel and maybe a backup combo are about all you need for early ice panfish.

Look for panfish in areas where you caught them in the fall. Weedbeds can be very good, but shallow rushes can be outstanding also.

Get on your starting spot early. Remember, we're fishing just a short distance from the fish. They're straight under us, and they're going to be spooky. Drill a few holes, then let the area calm down a bit. Oftentimes it will take a little while before fish in shallow water will start biting after you've popped some holes.

Once you're set up, don't move any more than you need to. Even if you're quiet, the fish will detect movement and get spooked again. Remember, the fish might be just three or four feet below you. Oftentimes you'll be able to see them down there.

If bluegills or yellow bass or the like are the target, go with tiny baits. Panfish such as bluegills and sunfish like smaller baits because they have small mouths. Northland has tungsten jigs in several different configurations that are outstanding for panfish. Tungsten jigs are tiny, but heavy for their physical size. That means they look small, which the fish like, but fish heavy, which an angler likes.

If crappies are what you're after, go with a bigger bait. Usually a sixteenth ounce presentation will do the job. Crappies often prefer a bait tipped with a small minnow.

When you're convinced that it's time to get on the ice, keep these ideas in mind and you'll increase your chances for success on early ice panfish.