The author Jason Mitchell explains some deadly rigging tactics that use faster speeds for triggering midsummer walleye.
Rigging has continued to evolve over the years and remains a deadly way for catching walleye throughout the season. Rigging can be a lot of different things depending on the angler and region. The classic live bait rig was a simple sliding walking or egg sinker above a small swivel that was attached to a three to seven-foot snell in which a size eight to four live bait octopus hook was used to present a crawler, leech or minnow. This classic rig was often meant to be fished slow so that the live bait could do the work. Night crawlers were sometimes given a puff of air. Minnows or chubs were often hooked through just the top lip. Rigs were meant to be put in front of fish and the natural seduction of live bait often triggered fish.

This classic live bait rig is probably how many people (myself included) learned to live bait rig for walleye. Add in some back trolling with an old two stroke tiller just to be nostalgic... still love the smell of two stroke exhaust. Over time however, rigging has evolved into faster presentations that work much better for covering water. In fact, many rigs today fish more similarly to a classic bottom bouncer and spinner presentation. Many of these rigs are designed to be fished faster than a mile per hour.

What I find is that many of these rigs really shine as a precursor to the classic spinner harness. There is also that in between transition when fish are starting to move, and you need to cover water. What we often find is that we might catch fish right away in the morning on a spinner but as the water gets flat or the sun gets high, we can pick off more fish by toning down the presentation towards a traditional rig.

Now what is considered a speed rig? A speed rig is any rig that needs some speed to work properly. An octopus hook and redtail chub will catch fish sitting still. A spinner harness needs to move through the water for the blades to turn. A speed rig is something more subtle than a traditional spinner harness that also typically doesn't need as much speed but still needs to move through the water to get the right action. Could be a Macs Smile Blade or Northland Tackle Banana Blade. Perhaps a simple Slow Death Hook. Other variations include propellers, Spin and Glows, and floats. For most of these rigs, speeds might range between .7 to 1.5 miles per hour. Most of these rigs work extremely well fished a touch slower than a traditional spinner harness. Most of these rigs also seem to usually work best behind a bottom bouncer. Since you don't ever have to stall or slow down to a crawl with these types of rigs, there is no advantage to using a sliding slip sinker. Drag and force the fish to load the rod tip up. This also isn't necessarily a finesse game, don't be afraid to use ten to fourteen-pound monofilament as the heavier mono seems to drag behind the bottom bouncer without twisting as you speed up. What you will often find as summer progresses is that speed kills. We often find that we catch more fish with these rigs by bumping up the speed.

The variations and combinations are endless but here are a few of my favorite tweaks on rigs that catch a lot of fish for me each season. By no means is this the end all and I continue to learn new ways to fish this presentation each season. The following however are confidence measures. Stuff that has caught a lot of fish and continues to work each season.

Long before Mustad trademarked the name "Slow Death," Lake Oahe guides Dave Spade and others were cleaning up on tournaments using this special half crawler rig that incorporated a bent gold Aberdeen hook. I still like to bend my own hook and find that the action is much better on the light wire Aberdeen hook than any of the heavier hooks that you can now buy. Simply take a size four Gold Aberdeen long shank hook and put a thirty-degree bend in the wire. For maximum dance, use the tail section of the worm and pull these rigs right around 1.3 miles per hour. Watch the rig next to the boat to see if the tail is flapping and dancing. The right action is more of a shimmy, not a corkscrew. When you know what this is supposed to look like and get it right... it out fishes any hook you can buy. Snell length is typically short, around 30-36 inches.

Now I am just going to come out and say this... If you put a Slow Death style hook behind a blade or put any number of beads or hardware ahead of the hook, the wobbling is lost, and the hook drags through the water just like any other hook. So... with that being said, many of the Slow Death type harnesses are a joke. Sure, they catch fish, but they catch fish the same as if they were tied with any other long shank hook. Something to consider when tying rigs or buying rigs. The Slow Death action is deadly, but you lose that action once you start adding Smile Blades, props and floats above the hook.

There are many floating jigs and float combinations and they all work well. One of my favorite ways to fish a leech however come midsummer is to use a large floating jig head on a three-foot snell and use a jumbo leech. At around a mile an hour, the jig head will really wobble adding a lot of action to the leech. The larger round head floaters seem to work the best because they will wobble as you dial up the speed. To pull leeches at faster speeds, lightly step on them and hook them through the nose. 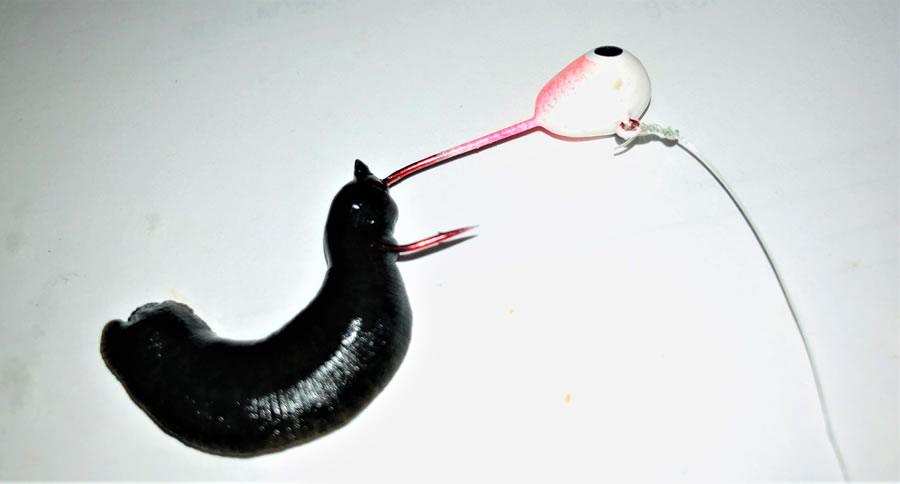 Burning minnows fast on rigs is deadly effective on many lakes. The beads and propeller seem to almost ballast the minnow so that the minnow simply drags through the water straight without excessive spinning. Double hook a fathead, rainbow or shiner on a long shank hook so that it hangs straight and cover water. If the minnow is spinning out of control and the snell is twisting bad, use a heavier snell. We often burn these rigs at speeds up to a mile and a half an hour. Half crawlers and leeches can also be used on these rigs. Don't be afraid to use this tactic with longer snells that are up to five to six feet in length. Keep your hardware to a minimum... couple of small beads and a small prop and keep your speed up to over a mile an hour.

I have long been a fan of Smile Blades and have recently fallen in love with the newer Butterfly Blade Rigs from Northland Fishing Tackle. These blades turn at extremely slow speeds and will wobble at even slower speeds. They create a lot of flash and keep turning on sharp turns or stalls in speed. They just catch fish. My favorite way to tie these rigs is to use the old school bait keeper hooks that have barbs on the shank or simply use a long shank Aberdeen. On both hooks, I thread about half a crawler up past the knot. These rigs also work well with both leeches and minnows.

Many of the rigs above (apart from the modified Slow Death type hook) are rigs with some type of hardware. Don't assume you always have to add some eye candy onto the rig. We still catch a lot of fish on plain hook rigs or rigs that have a single bead and we often fish these rigs fast and catch fish. Threading the nose of a whole crawler on a classic bait keeper hook and burning that crawler behind a bottom bouncer at over a mile an hour is deadly come mid-summer. When using rigs at these faster speeds, don't worry about feeding fish the crawler as any stall in momentum will cause the bottom bouncer to tip and add a lot of resistance.

If you start missing fish on a whole crawler, simply pinch down the crawler until you start hooking up. What I find is that when fish hit crawlers at these faster speeds, they typically eat the whole crawler. A few other thoughts are that this style of fishing takes a different mentality. You must fish fast enough to cause the bait to lift and to get that desired action. The props must turn, the crawler must roll and wobble if you are using a Slow Death style hook.

The strikes typically load up the rod. With this type of fishing, you will often be effective by simply placing the rod in a rod holder and the fish will just be on... pounding the rod. If you choose to hold the rod, you are going to have to get in the habit of dragging the fish along and letting the rod load up. Almost seems like fish just hang on the bait and as the bait slides and drags through their mouths, the fish choke up on it even more. This isn't finesse rigging where you have the bail open and feed the fish line but what you will find come midsummer is that these faster more aggressive rigging tactics can be much more effective. 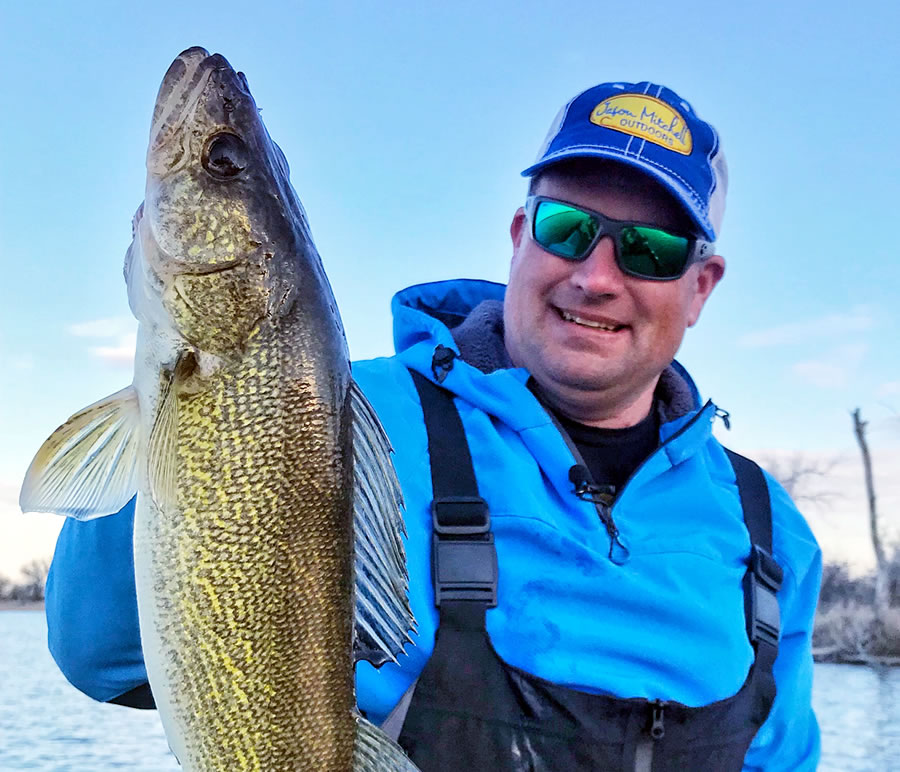