Running and Gunning for Spring Walleye 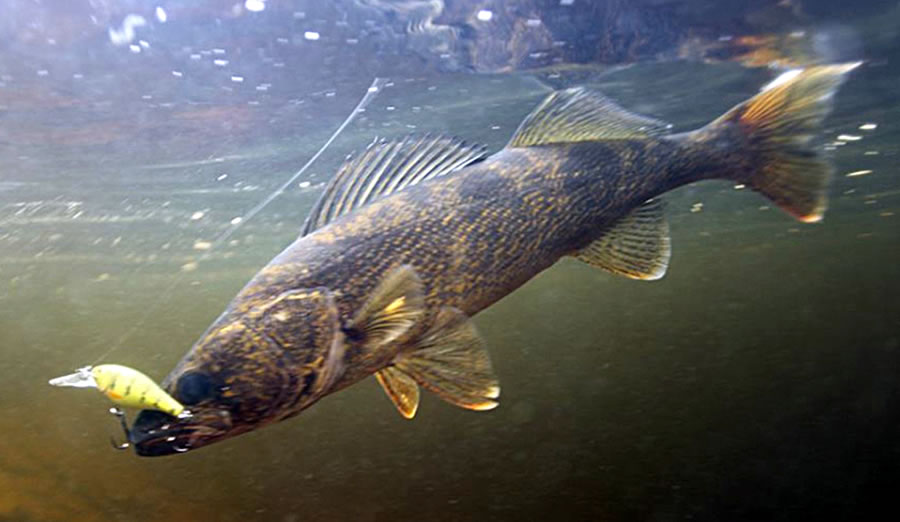 Ask a group of walleye anglers what their favorite technique is, and you'll get a lot of different answers. Some will say jigging, others will answer slip-rigging with live bait. A few will respond that their favorite is trolling with spinner rigs and snap-weights, while others still will prefer a drop shot rig. All different answers, but all similar in that they're all finesse tactics that can really save the day on tough bites.

It's almost a sure thing that no one will say they like to run and gun using fast-moving lures, and that's a real shame because sometimes, that's the best approach of all.

Most of us don't think of walleye as fast-swimming, aggressive fish. But in the early summer, that's exactly what they are. Still recovering from the rigors of spring spawning, walleye are looking to replace lost weight, and as quickly as possible. This is not the time to fuss with micro-jigs - these fish want meat, and they're not afraid to chase it.

With water temperatures in their comfort zone almost lake-wide, it's true that walleye will begin to disperse following the spring spawn. But they will never be far from food. Find the prey, and you find the walleye.

In shallow, weedy lakes and rivers walleye will actively hunt yellow perch, which themselves have just completed spawning and are still hanging around the shallow, emerging weeds. In larger lakes, walleye can home in on emerald shiners, chubs, shad and other prey. The key to finding early summer walleye is to learn where the prey fish will be located, then begin to map out a bunch of likely spots. Regardless of the type of prey fish they're eating, walleye will concentrate on spots that have three key features - rock bottoms composed of stones of different sizes, areas with emerging weeds, and spots exposed to waves or currents. Find a dozen different areas with those characteristics that should also hold prey fish, and that's where you want to fish.

The simple fact is that even if you've found the choicest spots on a given waterbody, walleye won't necessarily be there when you arrive. They tend to move onto the spot, feed, then drift off into deeper water to loaf. Because of the random nature of their appearances, your best odds for contacting aggressive, feeding fish is to simply cover a lot of water.

It's not unusual for me to fish 10 to 20 different spots in a day when targeting early summer walleye. Once you arrive at a spot, don't anchor - use an electric motor to move along, casting quickly. If the fish are there, you'll find out soon enough. If you don't have any action after 20 minutes or so, move on to the next spot. Because they're feeding aggressively, early summer walleye don't fool around - if they see a bait they want, they will mow it down and hit it hard. No action simply means the fish aren't there to begin with. Try another spot and return later.

Your fishing technique should also aim to cover water. Forget jigs and live bait rigs, this is the time for fast-moving, horizontal approaches like casting crankbaits, swimbaits or inline spinners.

When fishing areas where perch are the key forage, I'll usually start with deep-running crankbaits that work just over bottom where the perch are. If shiners are the primary forage, I'll use inline spinners that run shallow in the water column, where the shiners tend to be. Mimic the appearance and location of the prey and you will find success.

Running and gunning is fun fishing, and at this time of year, it's especially productive. Instead of camping out waiting for walleye to come to you, take a more aggressive approach to targeting early summer walleye, and you could find yourself catching more and bigger fish than ever before.