By Craig Ritchie - March 25, 2019
While each of the four seasons has its own charms, it's tough to beat the surge of activity that comes in early spring as winter finally relaxes its icy grip. Fast-slowing streams across the Midwest attract big runs of powerful steelhead, open waters on the Great Lakes offer salmon close to shore, and warming shallow bays attract spawning pike in mass numbers. Yet I find one of the most enjoyable ways to wet a line is by exploring open shorelines for early season crappie.

Even as some of my friends are still ice fishing, I begin prowling open waters near shore in search of schools of crappie. Hit it right and the action can be furious, while the actual fishing is as easy as it gets. It's a nice way to get back into the swing of open water casting after a long winter lay-off.

Crappie begin heading to spring spawning sites under the ice, so by the time open water appears along the shorelines there are usually a few fish sniffing around. I focus my time on shallow bays along the north and east side of rivers and lakes, which tend to get just a little more sun exposure and thereby warm up faster than anywhere else. The presence of inflowing streams that bring oxygen and still warmer waters make a good spot that much better, as are spots that butt up against hard structure that conduct and radiate the sun's warmth directly into the water. Canals, locks, docks and sea walls all contribute to warming the immediate area around them, and that's what you want for early-season action. As long as you have a bit of water depth (from four to 10 feet is perfect), some cover in the water and sun exposure, you stand a good chance of finding fish.

This is one time of year where it pays to sleep late, as the warming afternoon sun can really help increase fish activity levels. Calm, clear days tend to produce better than overcast afternoons for exactly the same reason. Forget about rising before dawn and being on the water for first light - this is a much more civilized form of fishing.

After a long winter of staring down a hole in the ice, it's a pleasure just to use a normal rod and reel again. I keep it fun by selecting a light or ultra-light spinning outfit and light line - more often than not spooled up with simple monofilament in the four or six pound test range. Crappie fishing doesn't demand the brute strength of braids nor the stealth of fluorocarbon. This is old-school fishing at its finest.

The cooler weather would suggest live bait might be the best way to go, and indeed it's hard to beat a tiny shiner minnow or a plump waxworm fished a couple of feet beneath a small bobber. But crappie are never especially fussy creatures, and even in the cold water, live bait generally isn't necessary. Small jigs can be fished under a bobber exactly as you would fish a minnow, and they tend to catch just as many fish. Small plastic-bodies grubs or twist tails are popular, as are simple hair or marabou jigs in the 1/8 to 1/16 ounce range. Small panfish jigs with white hair and a bit of silver tinsel in them are my favorites, especially those with a contrasting pink or chartreuse head for a bit of added color. 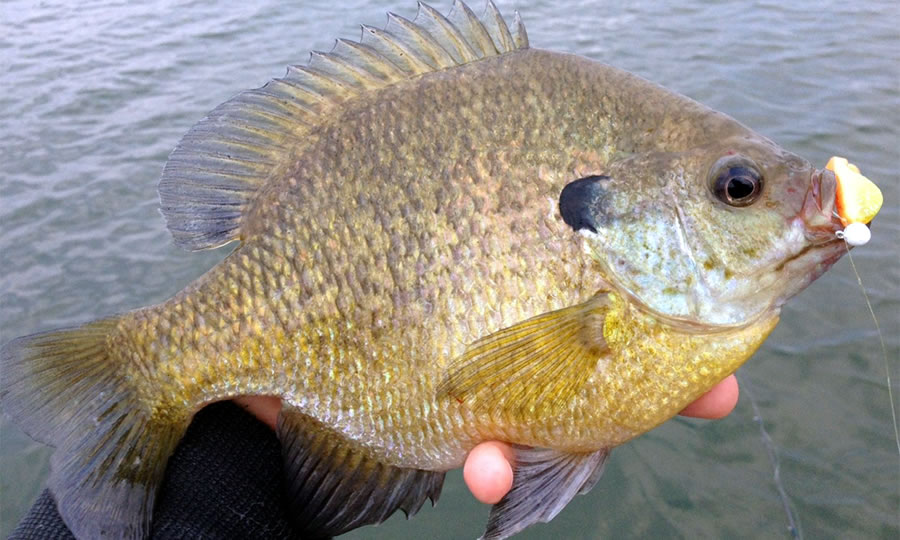 Big bluegill can be a really nice bonus!
Small inline spinners like the Mepps, Panther Martin or Vibrax are also excellent spring crappie catchers, and tend to skew the catch toward larger fish. I usually use these in conjunction with a short wire leader, for two important reasons. One, the swivel built into the wire leader alleviates the line twist problems that go hand-in-hand with using inline spinners, and two, they protect against losing lures every time a curious pike or muskie takes a swipe at the spinner. These toothy fish spawn in similar habitat to crappie, and it's not unusual for them to occasionally chew on small spinners intended for something else. Using a short wire leader doesn't just save you money, it does the fish a favor too, since you can easily unhook and release them instead of leaving them with a mouthful of unwanted metal.

Tired of staring down an ice hole? Then enjoy an afternoon or two of casting or ice-out crappie. It's easy, it's fun, and few other species can match them on the dinner table.