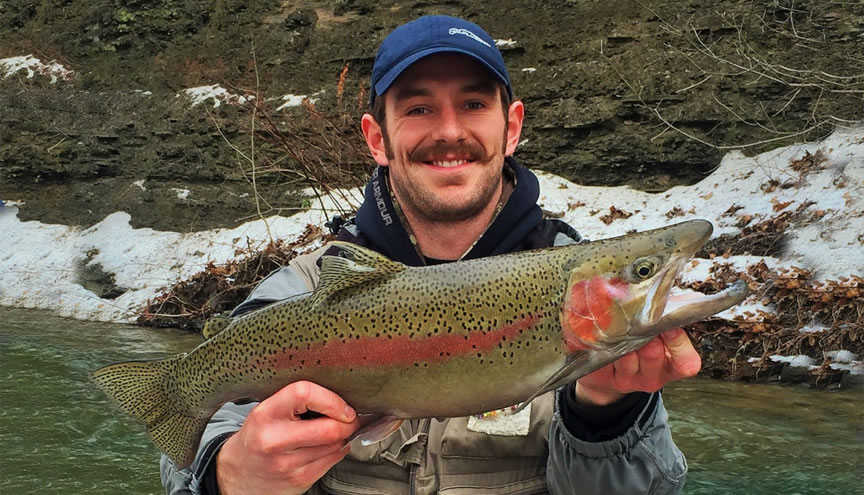 Good steelhead fishing begins earlier in the year than many anglers realize, often kicking off with that first mild spell in late February.
As much as I enjoy ice fishing, and as much as I look forward to a mid-winter trip south to get in some open water casting, my favorite winter pastime has always been river fishing for steelhead. Each year, starting in late February, winter begins to release its icy grip from the rivers flowing into the Great Lakes, and those rising meltwaters trigger a substantial migration of steelhead on their way to spring spawning sites upstream.

Steelhead, or migratory rainbow trout, were introduced to the Great Lakes at the turn of the last century, and today most cold-water tributary streams attract a run of these fish. What many anglers may not realize is that the so-called spring migration actually gets started a lot earlier than they may think. All it takes is a couple of relatively mild February days for the early arrivals to begin showing up at river mouths. The first fish will begin heading upriver at the first sign of snowmelt, encouraged by the smells of the fresh runoff. With the lack of fishing pressure, these early fish are generally among the easiest of all to catch, even if that means breaking trail through the snow to access the river bank. Late February and early March is when you're also likely to catch some bonus brown trout, including larger migratory fish that have held over in the winter after spawning the previous fall.

The other great thing about winter steelhead fishing that appeals to me is that it's a lazy man's game. Forget about getting up early and heading out before dawn - the best action with these fish usually comes in the afternoons, after the sun has warmed things up by a couple of degrees. Remember that fish are cold-blooded creatures, so even a mild bump in temperature can have a profound impact on their activity levels. The afternoon sun also tends to reduce the amount of slush drifting downstream from melting snow, making it a lot easier to fish without constantly fouling your line. 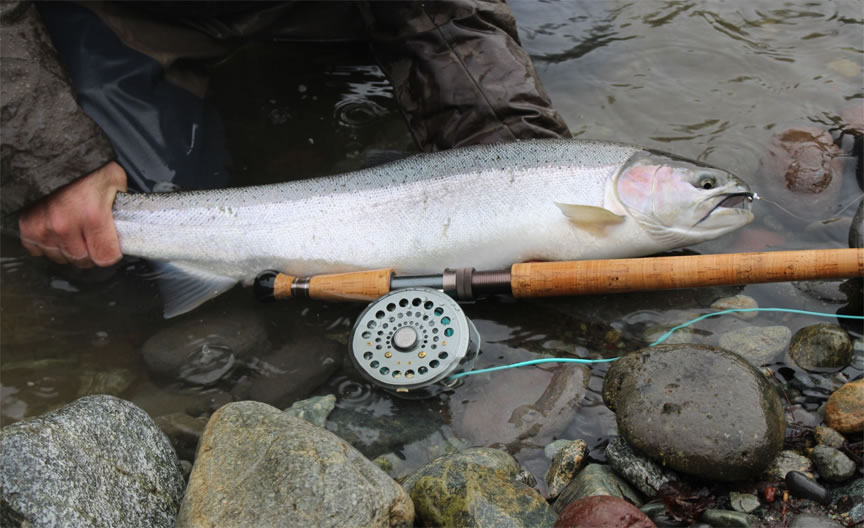 Drifting bead-head nymphs right on bottom brings special rewards for fly anglers.
The actual fishing is easy enough - the most consistent results come from carefully working the deeper, slow-moving areas found at the mouths of the spawning streams and for a short distance upstream. Drifting natural baits like salmon eggs, waxworms, mealworms or small minnows - either directly on bottom or suspended below a small bobber - is the most common approach. Using light lines, or light fluorocarbon leaders below a braided main line, enables natural-appearing presentations, while longer rods help keep the line off the water surface so it's less affected by drag. For their size, steelhead can often be delicate when taking a bait, so you'll want to pay close attention any time your offering is in likely-looking territory.

Other anglers prefer a more active approach and use small hardbaits that are retrieved slowly over bottom. Smaller spinners and spoons are particularly effective in winter, when steelhead are often loathe to move very far chasing a lure. But small wobbling crankbaits or banana baits like the Flatfish or Kwikfish account for a lot of big winter steelhead. These lures won't dive very far below the surface on their own, so don't hesitate to add weight in the form of one or more split shot sinkers placed a foot or two up the line.

Fly fishermen face greater challenges with the colder water, but they can often enjoy the greatest rewards. Low and slow is the name of the game here, and bead-head nymphs worked just over the bottom rocks are almost always productive. Small bug patterns like Muddler Minnows or Woolly Buggers are also highly popular with anglers focused on early-season fish.

Bonus brown trout are always a welcome catch.
Because the fish you're targeting are on their way to spring spawning sites, most anglers release the majority of the fish they catch, keeping only the occasional smaller, immature fish to eat.

It's definitely frosty on the fingers and your family will likely think you've lost your mind, but winter steelheading holds a lot of charm for anglers willing to brave the cold. If you've never given it a try, you might be surprised at just how much fun it is catching big fish while having the spots almost all to yourself.