By Jason Mitchell - January 28, 2019
Northern pike have a rap sheet with ice anglers. These top end carnivores have always held a special place in ice fishing lore simply for their attitude. Some of my earliest ice fishing memories involved staring down a hole in a shallow weedy lake. The weeds seemed vibrant like a neon green carpet. We would stare down the hole for hours watching pike and perch swim underneath. Each pike seemed larger than life as they fanned their fins and stared at our baits. Watching the strike was exhilarating. I can still remember how excited myself and my friends would get when a bigger pike rolled in. We could see the snout of a pike sticking into our field of view like a spade shovel. We could glance down another hole a few feet away and see a tail. In a flash, the bait would be gone. The ensuing fight often left tangled lines and chaos inside the fish house. In hindsight, few of those pike were ever over five pounds but those early experiences were intoxicating none the less. 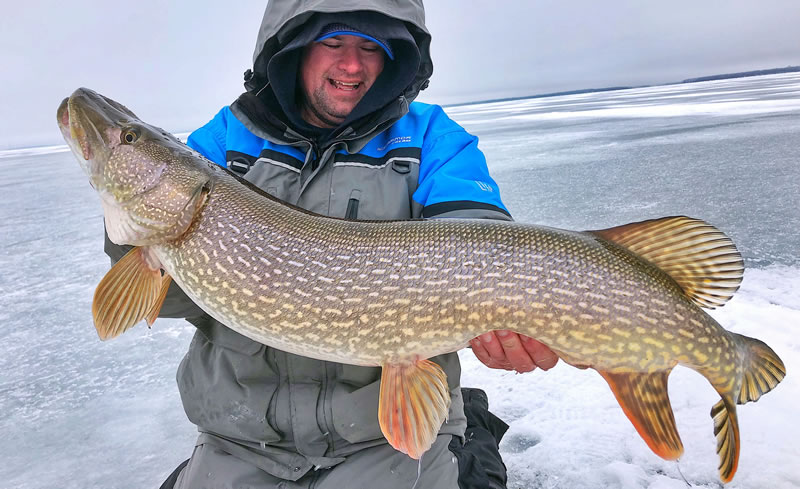 The author Jason Mitchell with a trophy class pike from his home water on Devils Lake.
I love to target big pike. I will stare at tip ups all day for just one bite, one fish that surpasses that magical forty-inch mark. Big pike will test tackle and the runs are intense. The fish run and roll below the hole in a confrontation that can only be described as violent. The water moves up and down in the hole to the point where your knees get wet. Big fish move water and simply pull back. I am always in awe when I get that first look at the broad, olive, back of a forty-inch-plus gator under the ice. When the head finally turns up the hole and you see the layers of teeth. The big fish often have that under bite jaw. The bottom row of teeth begins to resemble a row of roofing nails. Their eyes look reptilian. Big pike are special, and more ice anglers seem to be discovering how special these fish are and angling specifically for these big fish.

While catching pike through the ice can seem fairly rudimentary and basic, targeting trophy class pike often requires a different level of diligence. You also have to spend time on fisheries where big pike live. Classic big fish locations include big natural lakes like; Zipple and Buffalo Bay on Lake of the Woods, Upper Red Lake and Devils Lake. The Missouri River Reservoirs of Lake Oahe, Lake Sakakawea and Fort Peck. There are few under the radar locations like the backwaters of the Mississippi River. Of course, there are many opportunities north of the border in Manitoba and Saskatchewan in particular with a few drive to locations like Wekusko Falls near Snow Lake, Manitoba that are red hot for anglers willing to make the trek.

Each of these fisheries will fish somewhat differently but if there is a universal theme, you can't go wrong at least starting out on large shallow flats that are adjacent to deep water. This could take the form of a large incoming tributary that opens up into a large shallow bay on a large Manitoba Lake or a prominent reef or point that is surrounded by deeper water on Devils Lake. Some structure might be more obscure on places like Upper Red Lake where there is no real deep water or obvious structure, so the locations might be subtle. On the Missouri River reservoirs, focus on the large incoming creeks and look for secondary points and shoreline flats that are near the old creek channels. Some anglers believe they have to find weeds but there honestly doesn't have to be any weeds present. Structure seems to trump everything. Some of these locations are sand or a soft bottom while other locations have some flooded trees or rock. Incoming water can universally pull fish up really shallow and sometimes tight to shore at late ice but what is interesting is that we often find some big fish at early ice and midwinter not that terribly far from the classic late ice locations.

If there is one tool that is tailor made for catching big pike, my vote would go towards a classic tip up. Tip ups have probably accounted for more big pike than any other winter angling method. Classic tip up designs that feature a lubricated spindle and a spool that rests below the waterline are by far the most popular. I still prefer the old school Dacron line as I find it has little memory and is very durable. Dacron will soak up some water and freeze but that isn't an issue when the spool is in the water. I use the heaviest Dacron I can find and will often run a sixty-pound test main line. I find that the heavier line is much easier to handle when fighting a big fish and the heavier line rolls off the spool easier when a fish runs.

Oily dead baits like frozen smelt, herring, anchovies, ciscoes and tullibees often seem to work better than live bait from my experience. I find that dead bait often works much better if the bait is fresh. Bait that has been frozen and thawed or old bait that has lost the shiny sheen on the scales doesn't seem to catch as many big fish. I also find that I catch more big fish if I can get the bait to hang perfectly horizontal in the water. I also find that I catch more fish if I don't use any weight on the line to sink the dead bait. Simply pop the air bladder and squeeze out the air so that the bait sinks and hangs horizontal. If you don't have to add any split shot or weight, it seems like the fish run with the bait better and don't drop the bait as much. Many pike anglers use a classic yoke quick strike rig like the Big Tooth Rig. These rigs are simple and effective and available in both steel and heavy fluorocarbon. These rigs have a couple of small flicker blades and beads for added attraction and this extra hardware makes them legal in Minnesota where regulations prohibit using two hooks on one line unless the hook is in conjunction with a lure (thus the addition of beads and blades constitutes a lure). In really clear water and on water that sees heavier pressure, we have been catching more fish by tying our own fluorocarbon rigs that don't have any additional hardware. 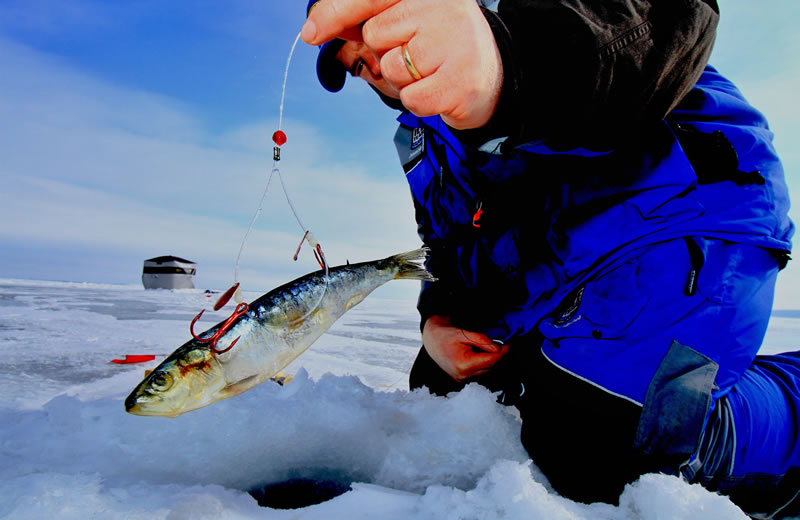 One aspect of pike fishing that is often overlooked is where to fish in the water column. There are days where there honestly seems like there is no difference in that pike find the bait no matter where it hangs but there are days where there is a definite pattern. Experiment with hanging the bait next to the bottom or even right on the bottom and also experiment with hanging the bait halfway in the water column and right under the ice. I would say that a general rule of thumb is two to three feet off the bottom but there are days when a little detail like fishing right below the ice can make a big difference in success. What is interesting about trying to target big pike with a spread of tip ups is watching the feeding windows develop. On the very best days, there are flags popping all day long, but the reality is that most days will have lulls and slow periods where most of the fish seem to come in flurries. You can have an hour of nothing and then have an hour where you can't keep every tip up in the water. You sometimes have to fish methodically especially when you are targeting a big fish on big fish locations where you might only get a few opportunities. I like to give good locations about two to three hours to see if there is any activity. A good rule of thumb is a flag per hour when targeting big fish.

Another lesson I have learned over the years particularly when fishing in less than ten feet of water is simply to let the commotion settle down. Drilling holes and walking or driving around on the ice simply stirs the area up. Let the activity settle down and keep your noise down. There are times when you have to run up to get to a tip up when the fish is really burning off line but what is surprising is just how often the spindle on the tip up is slowly turning and then takes off as you walk up. The fish get spooked from your steps and start to run. I like setting the hook on fish as they are moving but the reality is that the further the fish goes, the better the chance the line gets caught on something underwater where there is enough resistance for the fish to drop the bait.

Most importantly when targeting big pike is simply taking care of the fish. Have your hook release tools like a long nose pliers and jaw spreader on you. Unhook the fish when the fish is in the hole so that it isn't flopping all over the ice. Stay in control of the fish when you lift it out of the water by firmly gripping the gill plate and hold the fish horizontally. Support the weight of the fish with both hands. Trophy class pike are just too special of a fish not to take care of properly. The reality is that big pike only get big on certain fisheries and most of these fisheries are either remote, large enough to buffer angler mortality or have special catch and release regulations that protect the top end fish. While small pike might be a nuisance to some anglers, I don't know of many anglers who don't delight in catching the big fish. Pike are also excellent eating as well and there are many how to tutorials on YouTube to learn how to fillet pike while removing the Y bones. In my opinion, a three to six-pound pike is perfect fish for eating and you can remove a lot of smaller pike from most fisheries with no harm to the resource. Eat the smaller fish and take care of the big fish so that they survive to trip somebody else's tip up on another day.

There is no doubt a fraternity of ice anglers who are very serious about pike and big pike in particular get a lot of anglers excited. There is a certain comradery that comes with a group of like-minded anglers and a spread of tip ups. For many, pike are the largest game in town. A perfect top of the pyramid predator that continues to inspire awe.