Winter Is Prime Time For A Tennessee Grand Slam

Ice fishing is fun, but I prefer casting in open water to drilling holes in a frozen lake. Thankfully, winter brings all sorts of great opportunities that are just a short drive away. Tennessee isn't far from my home in the Midwest, but it's a world apart in January. While our lakes are capped with a layer of ice, lakes in Tennessee remain wide open, and you fish out of a boat instead of an ice hut. And here's the kicker - would you believe some of the best bass fishing of the year takes place from January till March?

So says Clinton, Tennessee bass guide Charlie Lane. Winter isn't just a great time to be on the water in Tennessee, it's one time of year when it's possible to catch a Grand Slam, which is a smallmouth, largemouth and spotted bass all in the same day. You can also try for a Super Slam with a fourth species - striped bass, which are stocked into many Tennessee lakes each year. When Charlie suggested we give it a go, I jumped in the truck and headed south.

The following morning, we were launching Charlie's bass boat. Our game plan, he explained, would be to start by looking for aggressive smallmouth in very shallow water, quickly covering shoreline contact spots like points and coves. After catching a few fish, we would move to a spot where he felt we could catch some spotted bass. Then we would hit the shallows again for largemouth, and hopefully have our Grand Slam. That would leave the entire afternoon for trying our luck on stripers - by far the toughest of the four species to catch.

It didn't take long to get things going. Shortly after we arrived at our first spot Charlie broke the ice with a pretty smallmouth of about three pounds. A few casts later, I had one of my own, and was one-third of the way toward my Tennessee Grand Slam.

After catching a few more smallies, we decided to move on. Rounding a long shoreline point that was dotted with dogwoods, Charlie spun us into a finger-shaped bay where we hoped to find spotted bass. We began just inside the point and worked our way in, firing out long casts along the shoreline. I felt a solid thump on my line and set the hook into my first-ever spotted bass. 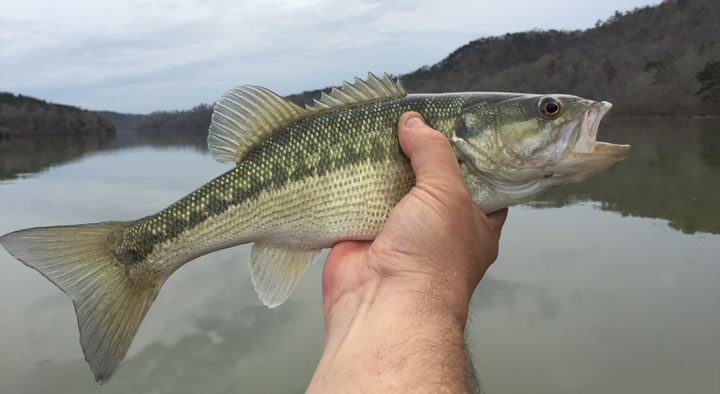 Spotted bass are interesting fish - they look like a largemouth, but act more like smallmouth, preferring clear, open water to the weedy haunts of largemouth. They usually travel in large schools, so when you catch one, you'll usually catch a bunch. While they're great fun on a light spinning outfit, they seldom attain the size of either of their relatives, usually topping out at about two-and-a-half pounds. Still, they're fun to catch, and we boated several of them in short order. Then a heavy fish crushed my crankbait and hauled off for deep water, bending my little spinning rod right to the handle.

Striped bass in Lake Norris regularly reach 20 pounds and sometimes top 30, so the six-foot light spinning outfit I had been using for the spotted bass left me seriously under gunned. The striper peeled line from the reel at will, until I could see the aluminum arbor beginning to shine through the remaining line on my spool. Just as I thought we would have to chase it, the fish turned 180 degrees and charged toward us. I frantically reeled up slack line, when just like that, it was gone. My little crankbait floated to the surface. Rats.

That turned out to be the only striped bass we would see. Although I did get my Tennessee Slam later in the day when I boated a beautiful largemouth, missing the opportunity for a Super Slam lit a fire inside me, and I'm looking forward to trying again this winter.

While winter might bring great ice fishing action, it also brings some of the best open water fishing of the year in the near south. If you're looking for a change of pace, or just feel like a break from drilling holes, point the truck south and take advantage of some of the hottest action of the season. 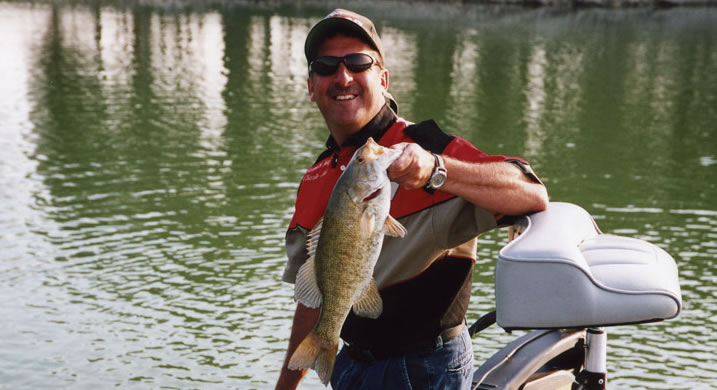