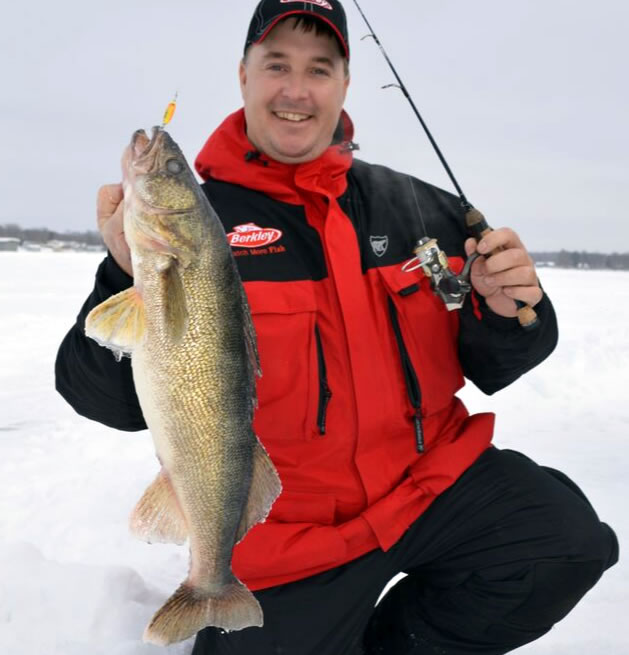 While it may not be for everyone, ice fishing in the early winter often produces the best walleye action of the year. Part of the reason for that lies in the time-honored principle of supply and demand. In the spring and summer, forage fish are plentiful, and walleye have it easy. But by fall, after months of heavy predation, forage fish populations have been thinned out somewhat, and walleye have to become a little more aggressive to keep their bellies full. By early winter, they're hunting actively, creating perfect conditions for anglers looking to catch big fish.

The fastest fishing occurs early in the winter, as soon as safe ice forms. Through mid- to late January, walleye will still be found in the very same locations where they were caught in late fall, while fishing in open water. That includes shoreline points, saddles, steep shoreline drop-offs or areas where deep weed lines extend from shoreline shallows into open water. They will remain in these locations for several weeks after ice forms, before gradually dispersing into deeper water through the middle of the winter.

Use an Active Approach

First ice walleye fishing is a run-and-gun affair. Because the fish are foraging actively, first-ice is prime time to cover water and use an active approach such as jigging with artificial lures, as opposed to more passive approaches like still fishing with live minnows on a tip-up. Walleye feeding actively are more apt to respond to the fluttering action of a jigging spoon or soft baits like Berkley's PowerBait Ice Wishbone or Berkley Gulp! Minnow on a simple jig head, while the bait's flash and vibration can attract aggressive walleye from a considerable distance. That's not to say you won't catch fish with live bait - you will - but why bother with the fuss and expense when this is one time of year when you really don't have to?

The active approach applies to your choice of locations as well. Drill a few holes, try different depths, but if you don't get any action, head down the shore a bit and try another spot. If walleye are in the area, you'll usually find out pretty quickly since they will be feeding actively.

Stay on The Fish

As when fishing in open water, walleye fishing through the ice is generally best at dawn or dusk as opposed to mid-day, and better on overcast days than those with bright sun. In deep, clear lakes, start out by fishing along fast-dropping shorelines in water that's 10 to 20 feet deep. In shallow lakes with less water clarity, try depths from six to 12 feet as a starting point.

Walleye will almost always be located right on bottom early in the winter, so experiment with different depths until you make contact with fish. As a schooling species, walleye seldom stay in one area for long. When they do move, they tend to follow the shorelines and remain at the same depth. If the action slows, don't move shallower or deeper - spread out down the shoreline and try other spots at the same depth. It shouldn't take long to re-establish contact if the fish are there, so if you don't have any bites within a few minutes, keep moving along the shoreline till you find them again.

Looking to get a jump on winter? Then keep an eye on lake ice levels and once it's safe to venture out, try an aggressive approach to tackling first-ice walleye. You could find yourself enjoying some of the fastest action of the year.