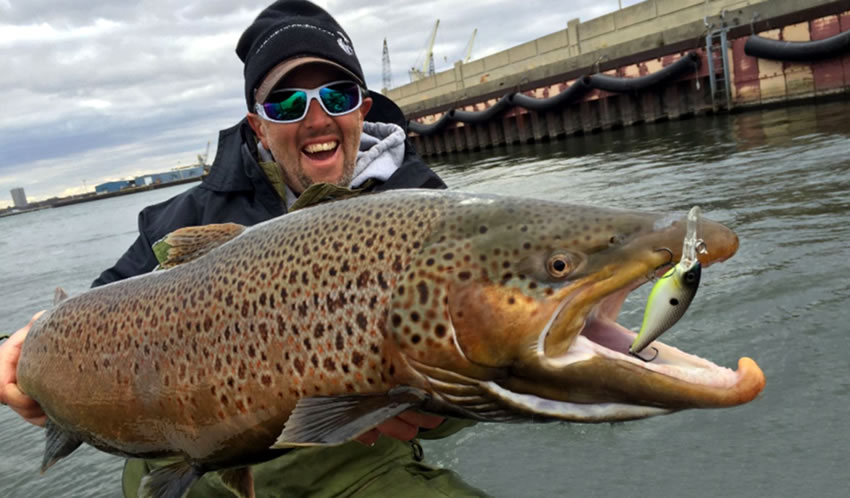 Big bass are impressive, and big walleye are tough. But many anglers will agree that few freshwater fish can be tougher to catch than a trophy brown trout. But there's one time of year when even the wariest brown trout become downright easy to fool, and that time is right now.

Brown trout are adaptable fish that can thrive equally well in water from small brooks to the open ocean. Here in North America, the biggest brown trout come from the biggest waters, so focus your efforts on the Great Lakes, or big systems that have had brown trout stocked in the past five years.

Browns are voracious predators, and they can tolerate much warmer water than most other trout species. In big water environments, they spend virtually the entire year feeding heavily along shoreline structures like sea walls, points and rocky shorelines. Browns are lazy fish that do not enjoy working for their meals, so they use shoreline features like points and piers as structure to corral prey against, allowing them to feed at their leisure.

Most people fishing from shoreline structures cast as far as they can, straight offshore. That's not really the best approach since most of the fish will be within a couple of yards of the shoreline. Casting way offshore is a waste, since most of the time your lure won't be where the fish are. To make the most of your time, try casting along the shorelines, not away from them. That will keep your lure is in the strike zone for a much longer period of time. You may hit a few more snags and lose a few more lures, but the number of extra fish this produces makes it worthwhile.

Brown trout hug shorelines at any time of year, but the biggest concentrations of big fish come during winter when the lakes are frigid and water right along the shores can be a even just a few degrees warmer. Start fishing right now, and plan to enjoy great action right through till March.

Brown trout in shallow water are most active at dawn and dusk, when the light doesn't penetrate more than a few feet below the surface. But on a cloudy, overcast day they can remain active right through the afternoon.

How to Catch Them

Big browns trout get to be big the same way you or I do - by over-eating. Leave your fly rod at home, because these big fish couldn't care less about chasing bugs. They want meat, and plenty of it.

The best approach is to cover as much water as you can, using lures that mimic the local baitfish that these big trout are feeding on. My go-to baits are shad-style crankbaits in the three- to four-inch size, both deep divers and shallow runners depending on the depth of the water I'm fishing. Most lakefront piers and breakwalls sit in 10 to 20 feet of water so I use deep-diving cranks most often. Having said that, running a shallow-running crankbait over bottom rocks right along shoreline rocks is a great way to catch super-aggressive fish that are actively chasing baitfish up against the rocks.

Rapala Shad Dancer
Standard floating lures are best for most situations, since if you get wedged in the rocks, gently pulling the line taught then plucking it like a guitar string usually pops the lure free, floating it free of the snag. In colder weather when the fish may be a bit less active, suspending lures that you can fish in an enticing stop-and-go pattern can be deadly. I generally don't bother with true sinking baits, since once they become snagged it's usually game over.

If you want to catch the biggest brow trout of the year, get out there now and throw crankbaits along those shorelines. It's cold fishing for sure, but the rewards make it all worthwhile. 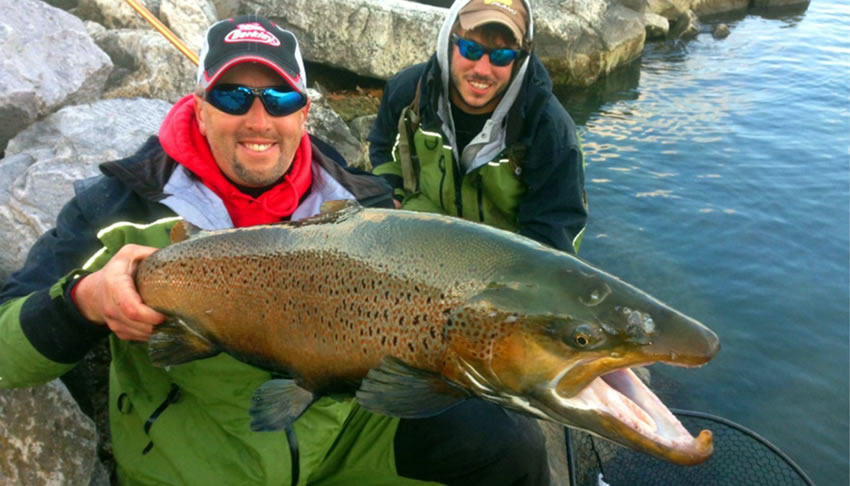