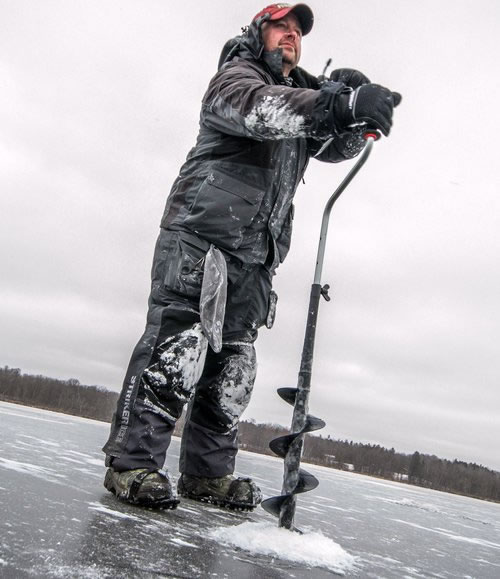 First ice safety is something that comes up annually this time of year, and despite our best efforts as anglers, is highly ignored. We’ve seen the graphics, know how thick the ice generally needs to be, and we understand the risks involved, but somehow these risks are weighed and the balance is deemed acceptable no matter how unsafe the ice actually is. Most advice you’ll read on the subject involves some scary stories, and while I have been through the ice a few times, this article is about straight talk; what to look for and how to best take advantage of the early ice period. There’s plenty of safe ways to enjoy first ice provided you observe the rules of the frozen water.

Have a Plan - I once watched a man from shore on a barely frozen Lake Pepin, readily setting the hook on walleye in what seemed to be a regular fashion. He was all alone, the month was December, and I was down there just to check on ice conditions. Then, I noticed what appeared to be a rope, tied around his middle, leading the short distance back to shore and tied off to a less than stout Boxelder that was hanging over the ice. Ice-check complete, as far as I was concerned. If he felt the need to “tie-off,” I felt the need to give it some more time. Still, his approach, at least in a modified fashion is something I’ll always remember and incorporate into my first ice planning. Namely, it’s to have a plan in the first place. He thought of the unthinkable, and planned for it, albeit poorly in my opinion. Instead, I would think of a few valuable pieces of equipment first and foremost, in this order: ice spud or chisel, a throw rope, and ice picks.

Testing – All first ice should be chiseled, punched, or otherwise struck to see what it’s made of. If you don’t have a chisel, then buy one, or wait until the wheelers and sleds are driving on before you dare walk out. It’s that important. Every step or two, swing a weighted and aggressive chisel downward. For the first few steps off shore, chip a hole and observe general thickness. Do this several times in the next few feet. Last year we were filming in South Dakota under brutally cold conditions, with nearly 10 inches of the most beautiful black and clear ice you ever saw. Our snowmobiles cruised over the frozen lake, drivers confident that we were as safe as could be, at least until we saw a small neck down. It’s not news that inlets/outlets, channels, or even narrow spots in a lake can freeze at a much slower rate, especially with flow, but this was in a small slough with temps hovering around zero. Still, one of our crew spotted what looked like cattails that were not snow-covered like the rest of the shore, and sure enough the chisel plunged straight through the 1” of ice there was at that location. It wasn’t enough ice to support the weight of a single person, let alone several, with snowmobiles, and loads of equipment. Too often, it’s under these conditions, with good ice in most places and poor ice only in some, that first-ice can be the most dangerous.

Dress For Success - These days, there’s no excuse not to have a great pair of floating bibs and jacket. No one plans to end up in the drink, but having a great suit that ergonomically stores your ice gear where you need it AND may save your life? Yes please.

Why a Rope? – If you do go in, having a throw rope handy not only helps to save you, it helps to keep others at a distance necessary to not go in themselves. Too often, without a rope, even with a friend nearby, there’s no safe way for them to aid you. Moreover, rope just isn’t on the gear checklist of most anglers, so when you need it, rarely is it among the rest of your things unless you plan for it.

Picks When All Else Fails – If you don’t have a rope handy, or perhaps if the rope is too short or not throwable, ice picks are your last line of defense. For thin first ice however, they’re far less effective, as typically the ice around you is easily breakable once there’s already a big hole in it. Still, if they’re on you, they’ll be able to provide some grip, even if only temporary, to perhaps make your way closer to shore or up onto the ice. Their value to me was demonstrated a few years ago when fishing Duluth Harbor with a few friends, early in the morning. It was dark still when walking out, and though we had great ice thickness, warmer weather had left a slick layer of water over the ice, meaning your boot soles first hit water before they hit the ice below. Now Duluth has a shipping channel, where ice-cutters are moving through in and out, at times breaking off big sheets of ice and creating big gaps or cracks between larger sheets. Our headlamps were on, but my buddy walked right into open water, and luckily was able to use his walking momentum and the force of coming up and out of the water to project himself to the far ice sheet, nearly 6 feet away from us standing on the other side. The distance was too great to jump back, so he took his picks, jumped and laid out for the sheet of ice we were on, while sinking them deep up to the pegs. He was able to easily climb his way back up to where we were. Without picks, on a water-covered sheet of ice, in the dark after getting soaked, I’m not sure we would’ve had a good means to fish him out or across.

Slow Down – Use all of the tools at your disposal, and allow time to properly chisel and check each of your pathways. First ice isn’t necessarily a place for children or those that are inexperienced. It’s simply too easy to forget where you’re safe, and where you might not be. Start small and fish an area awhile. From experience, there’s a big difference from “making-ice” and “cracking-ice,” so go with your gut on that one, but at least think about it. Ice can bow a great deal under your weight, and if it feels like it’s “giving,” it probably is. Macho rants and broad declarations about fishing on 2”es or less are best left for the bar and not brought out onto the ice with you. Take your time, heed the advice here, and fight the urge to be the very first person out there. Be the safest, and live to fish another day.

Joel Nelson
Joel has been fishing the bulk of what the ice-belt has to offer for more than 25 years. Advanced degrees in the Natural Sciences, including Fisheries and Digital Mapping Technology allow him to both think like a fish and find them, sharing in print and video the tools necessary to locate new bites on undiscovered bodies of water. Joel has been cutting against the grain since he used his first ice-flasher at age 10. For years he toured the ice-scape for the popular TV series In-Depth Outdoors, fishing the finest waters with the best guides and pros. Before and since, he's been a maverick amongst ice-heads, always looking for the next tactic or destination, while pioneering new takes on existing techniques to catch more and bigger fish. Joel currently publishes weekly tips, tricks, and hacks to make you a better angler at www.joelnelsonoutdoors.com, while answering angler-questions via the popular "Ask Me Anything" segment of his website.
BITS & BITES
Advertise here
Advertise here
Please take a moment to visit our sponsors. Without them we would not be here.