Recently, I caught and released smallmouth bass number 22,300 since catching my first in 1994. Many of those smallies have been caught in the ultra-clear waters of Green Bay and Lake Michigan in Door County, Wisconsin. My primary presentations require long casts. I've loved and still use FireLine Crystal and Nanofil, but was intrigued when the new Berkley FireLine Ultra 8 was introduced, and, won best fishing line at the 2017 ICAST.

I've spooled a few Abu Garcia and Pflueger spinning reels with 8-pound Ultra 8 and have spent quite a few hours fishing this line since May. I have a number of observations to make about the Ultra 8 and will start with an important feature for me. Ultra 8 casts a mile, as the saying goes. What Berkley did was fuse an eight-carrier Dyneema fiber braid making this line rounder and smoother than most other lines. This enhances casting distance. The diameter is also incredibly small to the pound test, which, also helps in casting and makes it more wind resistant. I've really appreciated how it casts in the wind, with most days fishing the big waters of Green Bay and Lake Michigan windy, and many times more than I'd like. 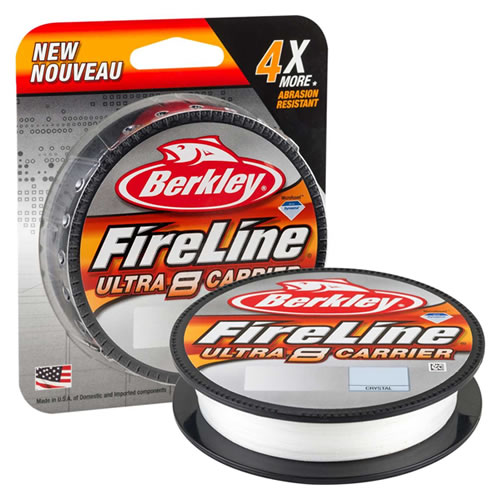 One thing I noticed spooling an Abu Garcia Revo SX back in May, is how stiff this line is. Again, fishing on many windy days, I believe the stiffness helps prevent wind knots. The very few I've had also are much easier to untangle. My primary presentation is working a soft plastic on the bottom, so, fishing with wind, I don't want a bowed line. The stiffness of the Ultra 8 seems to help with line bow on those breezy days.

Fishing clear water as I'm mostly doing, I utilize a Berkley Trilene Fluorocarbon leader for all my presentations. I'm tying 10-pound fluoro onto the very small diameter 8-pound test Ultra 8. I use the Uni-to-Uni knot and have had no problems with breakage while casting or reeling in those big smallmouth bass. I don't tie the lure directly to the Ultra 8, so, I haven't tested the Ultra 8 related to abrasion resistance at the point of contact with a lure. As much as I've loved original Fireline, even with the fluoro leader, I did notice some wear above the connection with the fluorocarbon leader. I haven't noticed this with the Ultra 8.

I have caught dozens of big smallmouth bass using reels with the Ultra 8 and I also haven't noticed the line digging into the spool. I've had this happen before and you notice it on your next cast when the line seems to catch and the cast comes up short. As I've gotten older I prefer lines that I can see easier in the water. Ultra 8, like original Fireline comes in both white and smoke. I prefer white.

Having now used Berkley Ultra 8 for many hours over the past four months, I like it! If you are looking for a very good line for your applications, I would recommend you give Ultra 8 a shot. I don't think you'll be disappointed.