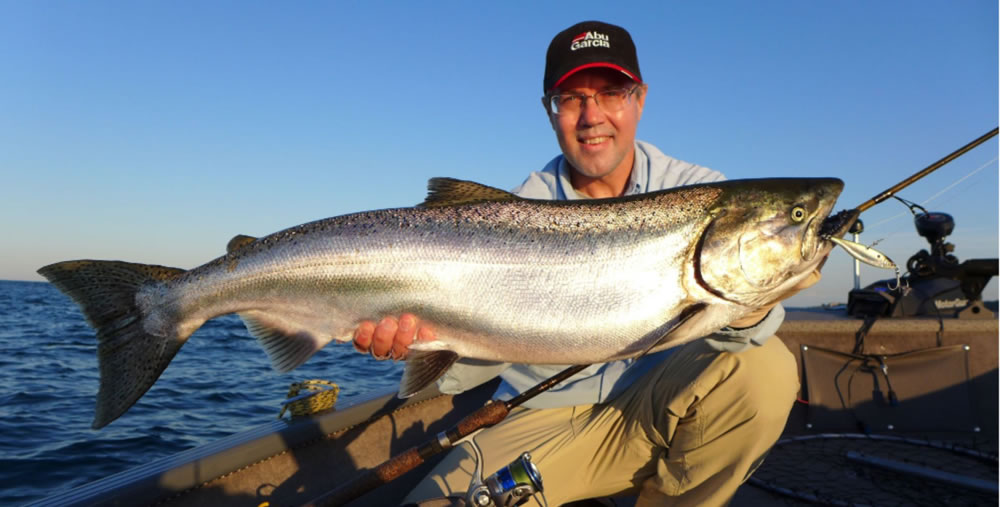 Many anglers consider fall to be the best time of the year for catching big fish, and that's especially true on the Great Lakes. Cooler temperatures and lower light intensity bring big fish back into shallow waters, creating tremendous opportunities for anglers fishing from small boats or shoreline piers. September is when large numbers of coho and chinook salmon return to the mouths of tributary streams for their fall spawning runs, and fishing these spots can bring the best opportunity of the year to catch big fish on light tackle.

Salmon begin gathering off the mouths of spawning streams in late August, but the best action comes in September when they arrive in big numbers. After spending their entire lives roaming the open waters of the Great Lakes, salmon can be spooky when they nose into shallow water, so timing is critical. Fishing early or late in the day is best, when activity and light levels are low. Salmon normally begin poking around the pier heads just before dusk, spend the night exploring the river mouth, and wander back into the safety of deeper water by late morning. The hottest action comes from just before dusk to just after dawn. Fishing at night can also be very good, especially if the fall weather is warmer and drier than normal, leaving shoreline waters particularly clear.

Fishing at night takes a bit of getting used to, especially if you're in a smaller boat. As always, make safety a priority by wearing a PFD.

As the month progresses salmon will begin spending more time in the river mouth, as they wait for rains to raise river levels and start their upstream migrations. The best fishing of all often occurs right before the rain arrives. Fish can detect rapid changes in barometric pressure, and the drop that precedes a good rain often spurs staging salmon to a higher level of activity.

There are two approaches to fishing for salmon from piers - you can still-fish with bait like salmon roe or live minnows, or cast with artificial lures like spoons, rattlebaits, minnowbaits, jigs or any other lure you can toss a long distance. Because early season salmon tend to be aggressive, most anglers toss lures, experimenting with different depths and retrieve speeds until they find what works best on a given day.

When fishing at night or during low light periods, fluorescent or glow-in-the-dark finishes can give anglers a real edge. You can charge glow finishes by exposing them to a flashlight, or use a small camera flash to really make them pop.

While it's possible to use typical bass or walleye tackle to fish for salmon, most serious anglers will gravitate toward longer spinning rods in the nine-foot range, which provide greater casting distance and more control over hooked fish. Large spinning reels with plenty of line capacity are a must, especially when fishing from shore. Braided lines from 20 to 50 pound test provide a nice balance between castability and strength.

If you've never tried fishing the Great Lakes for shallow water salmon, maybe this is the year to do so. The fishing is easy, the fish are big, and the pure fun just can't be measured.