The Spread on Spring Walleye

By Jason Mitchell - April 2, 2018
By nature's design, not all walleye spawn on the same day. Not all fish use the same reef or tributary. Spring spawning activity is often staggered. As a result, post spawn patterns and locations can range all over the board. Not only does each fishery has a unique personality but what makes fish movements even more confusing is that the entire population of fish as a whole is not always on the same page at the same time.

As anglers we get so locked in on finding a specific edge or spot on the spot that fish are using. We attempt to lock in on a specific depth. The fish are in twenty two feet for example... concluding that assumption after catching a few fish and then spending a great majority of our time trying to replicate that depth throughout the day. I find however that I can easily get too specific and that attempting to lock down too specific of a depth range can be really costly during the post spawn period. 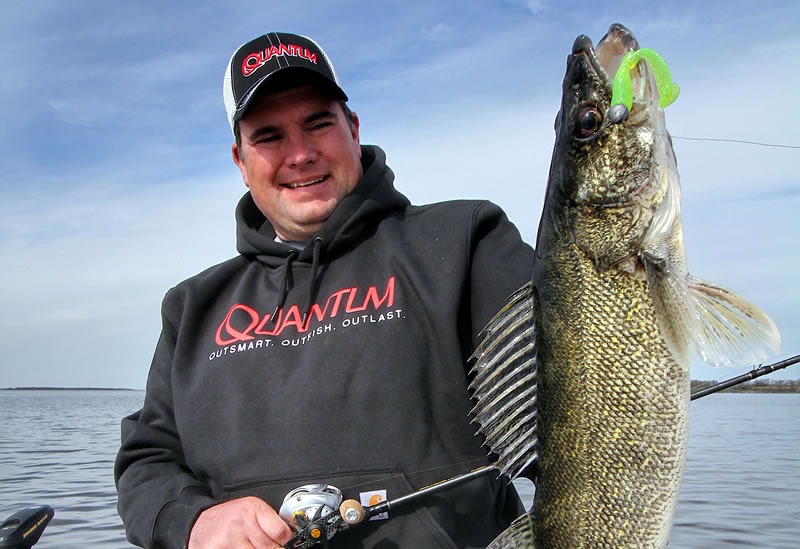 I find that we can often catch a lot more fish early in the open water season by not getting too specific. Instead of picking apart a location and attempting to lock down the productive depth, establish or fish in a manner to find as wide of a base line as possible. We might not anticipate fish being in forty feet of water during the middle of May (though we have seen that particularly around bottle neck areas with current or after severe fronts) but what we can anticipate is a shallow range where we might find fish in as shallow as seven feet and as deep as twenty feet. Each unique fishery will have a different range. Might be as shallow as three feet and as deep as ten feet on a prairie dish bowl lake for example.

Later in the season as fish become very edge orientated on a piece of structure, you might spend the whole day fishing a specific depth. Early in the season, fish movements are often wider as some fish move up shallow to get some sun or heat while other fish are deeper recuperating from the spawn. Fish often seem to be more spread out on a specific piece of structure where the shallowest fish might be in eight feet of water for example while some fish might be as deep as twenty feet. At times, some fish will push up into shallower water during the warmest part of the day when the water temperatures bump up a few degrees while other situations still see the shallowest movements of fish occurring during low light or after dark. The bottom line is that you can often catch more fish by fishing through a wider range of depths and this is exactly why casting or pitching from the boat makes so much sense.

Casting jigs and soft plastics catches a lot of fish in the spring and early summer on a wide variety of fisheries in part because you can deliver your presentation away from the boat which is a big factor when fish are shallow and won't let you drive over the top in shallow water.

What we often find early in the year is that where fish are on a piece of structure is a moving target. We might pop a few fish deep right below the boat and then catch some fish on a far cast on top of the structure. Other fish hit the jig half way back to the boat. That range in depth is so typical and not only does fan casting these locations allow you to touch all these different zones, it also enables anglers to find fish much more quickly.

So many walleye anglers get locked into finding a specific depth and then fishing below the boat but the damage you can do by simply casting around the boat essentially expands the water you are fishing dramatically. There are always limitations and exceptions however.

The fan casting mentality shines on isolated pieces of structure where there is some depth change where you can saturate the location with repeated cast. The reality is that if you use a jig heavy enough to touch fifteen feet of water below the boat on the end of the cast, the jig is going to be heavy and prone to snag in five feet of water. Because you have to err on the side of heavy to cover a wider range of depths, the jig and soft plastic combination is often deadly as you can swim the jig and fish faster during the top of the retrieve to stay out of snags.

If fish do keep coming from a more specific depth range, you can fine tune your presentation further by lightening up to target a shallow depth or in some cases use a slip bobber or split shot rig. You can also decide to fish vertically over one specific depth with the optimum jig weight if that is what the fish tell you to do.

Stay flexible and gather information by noting where fish are coming from on the structure. When the pattern seems to be all over the board in regards to depth or when you are trying to establish what the base line is each day, you can gather a lot of information in a hurry by casting through locations. Fishing below the boat or behind the boat will still be part of your game plan but you will catch even more fish if you incorporate a lot more casting into your early season walleye fishing and remember that the advantages of casting go beyond just targeting shallow fish that spook from the boat.