By Jason Mitchell - February 26, 2018
If there is one certainty with late ice crappies, there is no sure-fire location or formula for success that works across the board. What always amazes me on our travels as we travel across the Great Plains and upper Midwest is just how much fisheries can vary. The strategy and location on a small reservoir in North Dakota will be completely different than a deep natural lake in northern Minnesota. While crappies might indeed be genetically identical across the board, that is about where the similarities end. Each ecosystem has a unique set of rules. Lac Qu Parle fishes much differently than Bowstring. Pipestem Reservoir is drastically different than Merritt Reservoir. There are general rules of thumb and similarities but what separates good ice anglers from the great is being able to figure out the small nuances that make each of these fisheries tick.

In our travels, we are able to make some observations and perhaps the most consistent observation is that late ice consistently offers some of the best ice fishing of the winter for crappie on most fisheries. Locations, prime spots and staging areas however can really vary. Shallow sand hill lakes in Nebraska might find crappie staging in three feet of water along pencil reeds during the late ice time frame. A large lake in northern Minnesota might find schools of fish suspending off the deep weed line over twenty feet of water. If there are a few general rules of thumb to follow, it often seems like crappies in natural lakes are much more weed orientated where as we find reservoir crappie relating much more to the old river or creek channel edges, flooded brush or submerged trees or rocks.

Different lake types and ecosystems have drastically different patterns. Look for crappies to relate to more rock on many reservoirs. Pictured is the author, Jason Mitchell.
On many natural lakes throughout northern Minnesota and Wisconsin, crappies typically suspend out over soft bottom basin bowls or use weeds. As late ice approaches, structure that offers vegetation that is located between where crappies wintered and where they will eventually spawn is usually the dead ringer. Simply connect the dots as to where the fish were and where they will end up…. Usually a shallow protected bay or marsh. The bigger that area is, the more fish it can hold. Sharp breaking weed lines adjacent to these spawning areas are typically good but as the ice rots, fish will push up shallower and ride right below the ice.

A natural dish bowl lake in southern Minnesota, eastern South Dakota or the sand hills of Nebraska however fishes much differently where late ice patterns often occur next to shore somewhere around the rim of the lake and the key is finding the right dip or lip next to shore in conjunction with the right vegetation.

We have fished several great reservoirs for crappie. The upper end of Lake Oahe on the Missouri River System might be one of the best places around right now for catching crappie through the ice over fourteen inches. From large reservoirs like Oahe to midsize reservoirs like Merritt Reservoir in Nebraska or Jamestown Reservoir in North Dakota, what we so often find is that weeds are often lacking. The fluctuations in water levels and sometimes turbidity keep aquatic vegetation from developing and as a result, crappies react and relate to completely different times of structure. Most of the winter, fish seem to relate to the old river and creek channels whether they suspend in the channel or relate to that sharp breaking structure on the sides of the channel. Flooded timber and brush piles are top locations as well. What also makes these reservoir fish different is that they often seem to spawn on chunk rock or rip rap. Shallow rock piles in the back ends of creek arms often load up with fish in spring. We often find fish staging in tributary arms at late ice and as the season gets later, we often find fish pushing up out of the structure of the old channels and up onto shallow flats. If there is brush, trees or rocks, these locations get even better. On smaller reservoirs where there are no incoming tributary arms, what we often find is fish pushing up into the top half of the reservoir and the sweet spots are often inside cuts where the landscape forms a crevice or valley that funnels some of the runoff into one area along the shore. This runoff seems to eat the ice and stain the water and crappies go nuts.

No matter where crappie live, all fish seem to react to incoming snowmelt at late ice. Fresh water creeping in along the shorelines might add more oxygen, maybe it stains the water. The best bites often seem to correlate when the water starts to color up. Old holes will often thaw out and water will often run into the hole where there is foam floating on the surface of the hole. Foam is a good sign. The more holes in an area and the bigger the holes, the better. When you see foam, fish are often cruising a foot under the ice, look for fish really high. 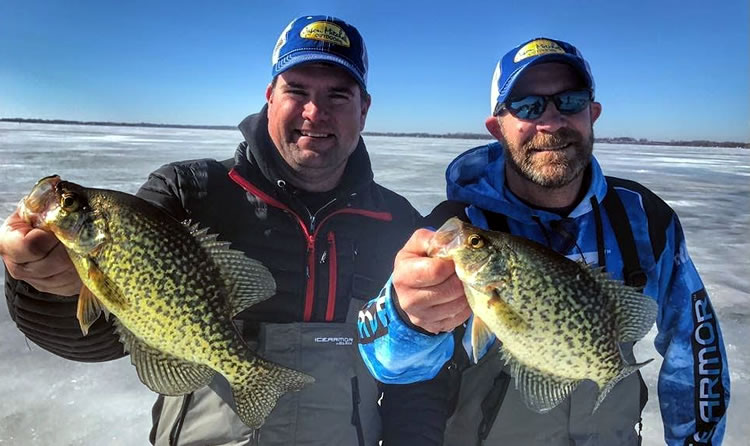 With Ice Team Pro Scott Merwin with a Lake Osakis crappie. Look for crappies on natural lakes to stage near sharp breaking weed lines that are close to spawning areas. The later the ice, the shallower fish push.
Because you can often anticipate really good crappie bites at late ice, you can catch fish on a lot of different presentations. Jigs with soft plastics are a standby and something I use a lot. Still like to often use tungsten even in shallow water as I love how abrupt the jig falls when I quiver the jig. The soft plastics often seem to move more water with tungsten and the extra weight seems to add a more intense action to the plastics. Tungsten and large profile soft plastic options like the Maki Jamei call fish in.

If there is a presentation category however that I am falling in love with more and more for crappie, it would have to be small spoons. Particularly on reservoirs when dealing with more turbid water, spoons seem to have more flash. Spoons also shine for finding fish over large water. Spoons can run the gamut from ultra-finesse like the CPT Guppy Spoon to loud and proud like the CPT Rattlin' Blade Spoon. On some water, some of the spoons we have success with more resemble walleye tackle compared to the finesse often reserved for panfish. Especially when anticipating big fish or dealing with turbid water and or current. Even on classic natural lake environments, when fish push up right under the ice or start using shallow weeds, there is a different intensity of aggressiveness that is often triggered by spoons.

Finally, and most importantly, late ice or last ice… whatever you want to call it is exactly that… last ice. Often some of the better fishing happens as the ice deteriorates. When water starts to run into the lake and holes open up, you are fishing on borrowed time. Safety is priority number one. If the ice flexes or sags as you walk across it, get off the ice. When the ice comes up in chunks when you drill a hole, get off the ice. Always carry a rope, life jacket and ice picks. Keep your cell phone in a sealed waterproof bag. Don't take chances.