By Jason Mitchell - January 9, 2018
Some of the greatest lures of all time don't necessary look like anything in particular but at the same time have the general appearance of something that a fish wants to eat. Trout anglers often fall back on a simple wooly bugger which we can argue can look like a caddis fly larvae or perhaps a damsel fly nymph... not really a spitting image of anything specific but looks kinda, sorta like a lot of things. A classic tube jig is one of the greatest smallmouth bass lures of all time... kind of looks like a crawfish, maybe a goby... could be something else depending on how you fish it.

As more ice anglers embrace the soft plastics, classics are beginning to emerge. While soft plastics fished correctly simply catch anything that swims, there is no doubt that the combination of tungsten paired up with soft plastic is particularly deadly on catching crappie through the ice. The original white Maki plastic has quickly become to winter crappie fishing what the classic motor oil tube jig is to smallmouth bass.

The classic Maki doesn't look like anything specific, could be a young of the year fish, perhaps an insect larvae or water beetle. Like so many productive lures, the shape, profile, action and water displacement aren't necessarily a dead ringer for any specific living thing but just an overall look that mimics several living organisms that fish eat. During the winter, the diet for black crappie can range from zoo plankton like Daphnia to larval insects like Chironomid, aquatic insects like back swimmers, crustaceans like freshwater shrimp or other fish; spot tailed shiners, young of the year perch, dace minnows or fathead minnows. Black crappies are notorious for foraging on zoo plankton because the fish's gill rakes allow them to filter feed. Typically suspending schools of black crappie are consuming a lot of zoo plankton with larger forage items mixed in to the menu when the opportunity presents itself. 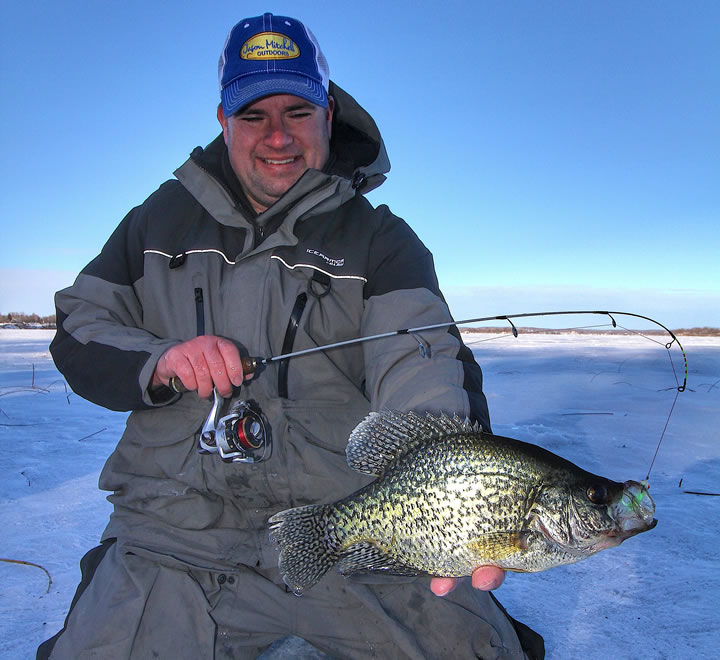 The The author, Jason Mitchell explains some of the hottest soft plastic trends for catching crappie through the ice.
Despite the fact that so much of a black crappies diet during the winter can consist of tiny microscopic invertebrates and zoo plankton that are less than a quarter of an inch long, some of the greatest jig and plastic combinations ever developed might measure an inch or more. Matching the hatch is often a phrase or cliché that gets thrown around a lot in fishing circles but some of the most effective presentations for winter crappie follow a different mantra.

Winter crappie locations might mean a flooded brush pile or submerged tree along a channel edge on a reservoir. Natural lakes might have weed and reed patterns. Regardless of ecosystem however, crappie are notorious for suspending and roaming over open water. Over this massive abyss, matching the hatch isn't practical because finding and catching fish is often a game of straight up logistics. Use a realistic duplication of a backswimmer that is a quarter of an inch long and fish that drift by ten feet away... might not ever see you. Fish six feet below you might not see you. So often, larger easier to find and see profiles catch more crappie simply because more fish come over to investigate. Once the fish close the distance and get close enough to scrutinize the bait, the lure simply has to look similar to something the fish has eaten before.

So often when using these larger soft plastic profiles that might measure an inch or more, the presentation becomes a game of keep away where you attempt to keep the presentation above the fish so that the fish has to accelerate and rise. Bigger profiles move fish from further away. Attempt to get an aggressive reaction from the fish. So often when working soft plastics, there are often two basic thought processes to experiment with... be the bug or be the minnow.

Replicating minnow movements might mean more abrupt slashes and snaps on the upstroke to raise fish. The smaller movements that happen as the fish gets closer might resemble upward hops with stops and shakes mixed in. Replicating bug movements might consist of simply quivering the tentacles and vibrating the rod tip to impart a pulsating action to the soft plastic. You can still raise the jig and pull fish up but the actions are more methodical while pulsating the soft plastic tail the entire time. From there you can mix and match to the mood of the fish and the situation you are fishing. Remember as well that you can "be the minnow" or "be the bug" with the same fish interested in the same jig. Mix and match until the fish either bites or swims away.

Now this isn't to say there are not situations where small bug profiles shine. Not to say that tiny finesse plastics don't catch crappie because they do. Day in and day out however, many ice anglers have discovered that bigger is often better for the simple fact that fish can find and see the presentation from a greater distance. The more fish you can pull into the cone angle of your electronics and the more fish you get a chance at, the more fish you can possibly catch.

The original Maki is about an inch-long profile that has five tentacles, resembling more of a squid than anything a crappie actually eats but this easy to find profile set the trend that has caught so many crappies for ice anglers over the past decade. Other profiles that fish big in the water include the Maki Draggi and the Maki Jamei. As these soft plastic designs became more popular, ice anglers demanded even larger profiles like the Maxi Maki and the Minni XL. 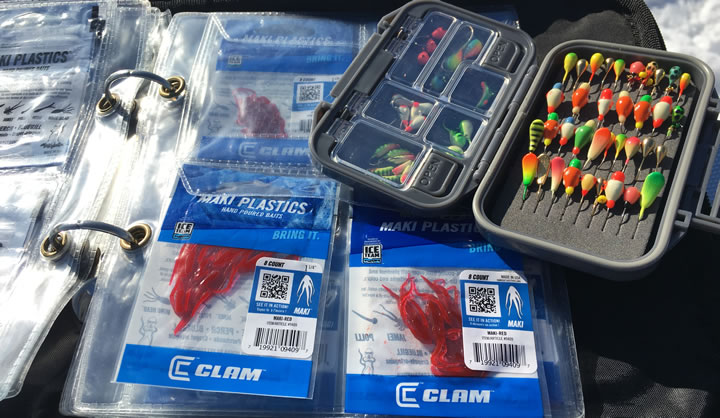 The CPT Tungsten jigs paired up with large profile soft plastics might not replicate anything specific found in the food chain but what these profiles do well is moving fish over to your location from greater distances… a key component for catching more suspended crappie.
Despite the fact that crappie might be sucking in zoo plankton, these fish are indeed predators that have a mouth big enough to fit a golf ball. Soft plastic options that fish can see from several feet away can simply catch more fish. Finding fish is simply the most important component of catching fish and the soft plastics that are changing crappie fishing do a really good job of also enabling the fish to find you. You will find more crappie suspended over the abyss this winter and catch more fish if the fish can simply find you. A profile, a silhouette, a contrast of color that is twenty or more feet away can simply be enough for the entire pack to roam your direction.

The combination of the larger profiled soft plastics in conjunction with horizontal tungsten jigs enable you to fish through water faster and the added weight of tungsten also displaces more water and imparts more action on the soft plastic. The entire system working together can be seen and felt from further away. Start out fishing big in order to track down the fish. If need be, you can always scale down after you accomplish the most difficult task (finding the fish). Most days, however you won't have to scale down. Throw the matching the hatch ideal out the window this winter. Simply attempt to find and contact as many fish as possible and you will catch more crappie this winter.