Lake of the Woods: A Fishing Destination

By Jerry Carlson - December 12, 2017
It had been a couple of years since I made my last trek to ice fish on Lake of the Woods. Because of this fact, I was quite thrilled to be invited to join tourism director, Joe Henry and a group of Ice Team anglers on a mid-March excursion to Arnesen's Rocky Point Resort.

Although it was my first trip to Arnesen's, I was quite familiar with this resort. It has been a mainstay in the Lake of the Woods region for years and is a top rated destination for both summer and winter angling. Their reputation for putting guests on fish is legendary.

We were all up early on the first morning of fishing. Working with the Ice Team crew meant there were plenty of details to take care of before we embarked onto the ice. It was barely light when we pulled off of the shore.

The sunsets at Arnesen's Resort are as spectacular as the fishing.
Since the date was late and the ice was just starting to deteriorate, all of our fishing was going to be done out of portable shelters. Although I had never fished out of a hub shelter before, they proved to be easy to put up, very roomy and a warm environment out of the wind.

As is usually the case when on a fishing trip of this nature, it took a while to sort out the best technique. There seemed to be plenty of fish showing up on our Vexilars, but refining the presentation took a little time. Eventually, we got dialed in on what seemed to be the best presentation.

My best action came on a Clam Red/Gold Leech Flutter Spoon tipped with a minnow head or tail. I also caught plenty of fish on a dead stick and minnow. I found that by hooking my minnow through the belly I got more bites. When hooked this way, the minnow is constantly struggling to turn over and right itself which seems to trigger strikes.

In typical Lake of the Woods fashion, we found ourselves catching a real variety of fish. The walleyes were cooperative but so were the sauger, perch and tullibee. Some of the tullibee were quite large and very scrappy fighters. 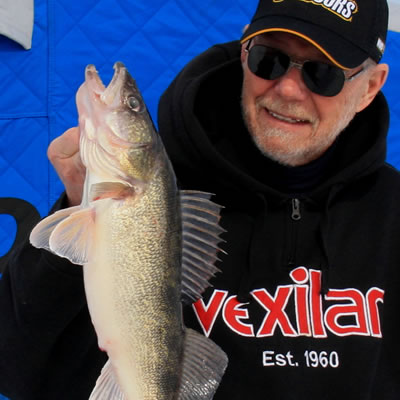 Many species of fish can be caught on Lake of the Woods including quality walleyes. 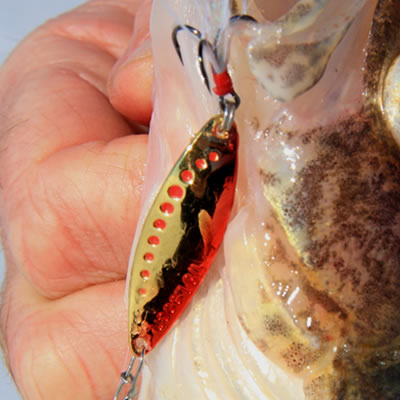 Clam's Gold and Red Leech Flutter Spoon was a hot bait.
It wouldn't be a Lake of the Woods trip without a few eelpout in the mix. A couple of the ones I caught were huge and tested my four-pound-test line to the max. Anglers have learned that these fish are actually very good to eat. Mine went back down the hole, however.

Lake of the Woods is an incredible body of water. It is a fish factory that produces quality angling year round, year after year. Although superb fishing can be found during any season, it has certainly become a favorite winter destination for ice anglers.

One of the reasons for the popularity of this body of water is the diverse angling options. Those that wish to stay in one of the many resorts and fish out of heated fish houses can do so. Others, that want to venture out on their own, also have that opportunity.

As we settle into winter and the ice season begins in earnest, you can be sure hundreds of anglers will be putting a trip to Lake of the Woods on their cold water itinerary. And, with good reason!