Find The Winning Spot, Then Stay On It.

Coming off my recent Cabela's National Walleye Tour (NWT) win at Prairie du Chien, the big question anglers asked was "how'd you get 'em?" That's a pretty big ask, because there are so many factors involved in the answer. The first key to the victory was finding fish in practice. Honestly, my practice days at Prairie du Chien weren't the greatest. I struggled to find good bunches of fish relating to key structures. I'm a pretty good current fisherman, but I was starting to sweat a little bit before I came up on a wing dam with Humminbird® Side Imaging® doing its magic. My new HELIX 12 with MEGA Imaging™ showed me there were some nice fish relating to that structure.

In the down-current sand flat beyond the dam, Side Imaging pinpointed scattered, inactive fish that were loafing there between meals. I knew from experience that those fish would move up to the dam when they got hungry and settle back to the sand between feedings. Think about people going back and forth to a buffet line - same basic deal.

With the fish located, my co-angler and I snuck up to the dam with the Minn Kota and I hit Spot-Lock to pin us down in the perfect position for a few practice casts. On his first retrieve, my partner tagged a nice 'eye on a crankbait. I promptly followed with another fish on a willow cat. After catching those two walleyes, we backed out of there to avoid beating them up too bad before the tournament. From that moment, I thought about how those fish on my Humminbird HELIX 12 screen were relating to the dam and the sand flat. Knowing where they were holding and how they were using the structure as an ambush position would be critical to bait presentation - and critical to that would be boat control. 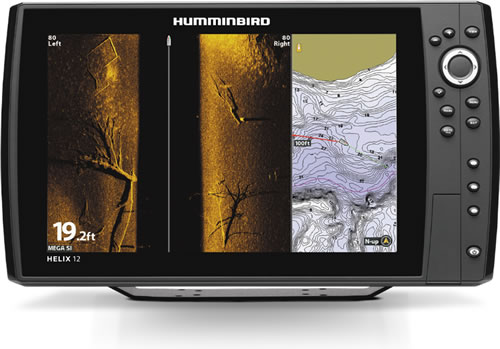 Going into day one of the NWT event on June 15th, I felt really good about hitting that spot and I knew that a secret weapon in my boat would help me catch them. No, the weapon wasn't a new crankbait, jig or rig. It was right up at the pointy end of my Ranger - the Minn Kota Ultrex. Now you're asking: A trolling motor won you the tournament? The answer is no, but my trolling motor ALLOWED me to win the tournament.

The Ultrex let me get right in the sweet spot for the perfect cast, and with a press of the Spot-Lock button it kept me RIGHT THERE automatically. I literally fished the entire tournament from Spot-Lock locations within a 40-foot radius. When I needed to make a little adjustment to effectively hit every square inch of productive water, a simple tap on the JOG button on my i-Pilot® Link™ remote control moved me five feet to the left, right, forward or back - then automatically locked me down again. My foot never touched the controls, so I was able to just sit back and fish!

Now let me tell you, that current was ripping through there - especially on day two when they opened up the flow. My trolling motor's ability to keep me on a dime was mind-blowing. But I wasn't surprised. I had total confidence that it would, because I had just come off another tournament where Spot-Lock had achieved the unimaginable.

The tournament was the Classic Bass Champions Tour on Mille Lacs where the conditions were brutal. The wind was bucking between 20-40 MPH and the smallies were on or around their spawn beds. With 4-6' waves, sight fishing those fish wasn't possible. The trick was to find big boulders with Humminbird Side Imaging, then Spot-Lock within range of the rocks and blind-cast for those big bronzebacks. It worked, and I was able to take 4th place along with landing the big bass award for the tournament. Without Spot-Lock, controlling the boat in that wind would have been impossible.

At Prairie du Chien, I was back with my no-cull limit at 1:00 p.m. on day one and around 11:00 a.m. on day two. That meant I got to babysit my fish for about 5-1/2 hours, wondering the entire time if I'd made the right decision in keeping the right fish. Talk about torture! At the scale, my weights secured the victory as solidly as Spot-Lock secures a boat in fierce wind and current. Minn Kota has changed boat control forever, making it easier to catch fish when it matters most. And I couldn't be happier.

Mark Courts
Mark Courts has been a professional angler since 1999. He has numerous tournament victories, 35+ top-10 finishes and was the 2015 Lucas Oil Angler of the Year. Over the years he has developed the techniques and skills necessary to fish numerous species and recently became a Great Lakes and Intercostal Charter Captain.
TRENDING DISCUSSIONS
Advertise here
Advertise here
Please take a moment to visit our sponsors. Without them we would not be here.