By Jason Mitchell - July 6, 2017
Walleye anglers have long loved crankbaits. Across many walleye fisheries, tried and true tactics incorporate trolling and for good reason. Trolling cranks allow you to break down big locations and cover water. There are several opportunities however where anglers can cast crankbaits and catch more fish.

Casting will never replace trolling as there is an obvious time and place for trolling crankbaits over shallow water. Large flats and scattered fish where anglers can be efficient by trolling across consistent depths call for trolling. There are so many situations however where anglers just overlook casting. Think of how many times on a trolling run where most of the fish come off a few waypoints… so many anglers will troll back and forth where each trolling pass might take fifteen minutes or more only to have the lures in the zone for a short window. When fish are keying in on a spot on the spot or whenever fish are pushing hard off the boat as the boat passes overhead, casting crankbaits can clean house. 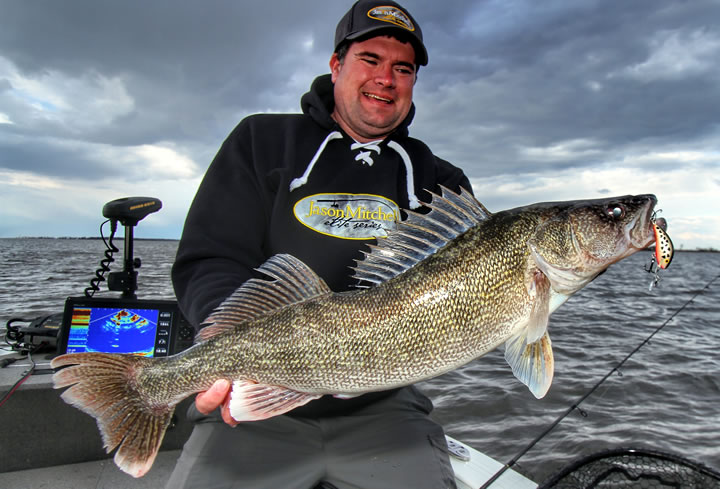 The author Jason Mitchell with a massive walleye caught casting a Salmo Hornet into a shallow windblown reef. For catching shallow and aggressive fish on a specific location, casting crankbaits is an extremely effective and fun tactic.
Classic crankbait casting strategies often meant positioning the boat in deeper water and casting in towards shallower water. When fish are hanging off weed line edges or rock, this shallow to deep angle can be very productive. Windblown shorelines are a classic example where anglers can cast in towards shallower water and catch aggressive fish that are positioned high up on the spot. So often during strong winds, fish seem to position just under the underflow that is pushing back off the shoreline where fish are positioned with their eyes facing towards the bank and the current. A good rule of thumb is that most fish will position just under the strong current that is created which is usually about twice as deep as the swell. The exception is that larger fish will often seem to move up in the faster current and shallower when big swells come up. Casting crankbaits is one of the most productive and safest ways to reach these shallow fish.

What I love to do when I have a general location narrowed down in shallow water if the fish are a touch deeper but holding along a defined shallow break line is nose the front of the boat up into the depth where the fish are holding and cast ahead of the boat where the lure follows the break line and stays in the productive zone longer. In shallow and clear water, you will bump some fish from below the boat as you move along. The big advantage however is that you fish the water before the boat passes overhead and you can keep the lure in the zone for a large percentage of each cast. Trolling can be the exact opposite; you pass over the fish first and the lure comes behind later. On definite edges where fish are holding along a specific transition, planer boards are not as exact so casting can be a big advantage.

If there is a mistake that many anglers make when casting crankbaits, it seems like so many anglers use too stiff of a rod. My favorite action in a crank casting rod is our Jason Mitchell Elite Series seven-foot medium light action spinning rod. A faster medium light action is typically required because crankbaits have small treble hooks and the fish typically fight hard. A lighter action rod paired up with ten-pound braid has the right flex for whipping lighter lures further and cushions runs where hooks don't tear out so easily. A good live bait rigging rod action is also typically a good crank casting rod. Pair the rod up with a smooth spinning reel like the Quantum Accurist AC25PTi. This reel has been run through the paces over the past couple of years by our team and is a phenomenal reel for the money.

Off shore reefs, wind blow shorelines, shallow weed line edges and shallow sand flats are all prime locations where casting crankbaits can shine. Whenever you need pinpoint accuracy and want to thoroughly cover a distinct location where there is a higher percentage spot on the spot, casting crankbaits will often out produce trolling crankbaits.

As more anglers are discovering, casting crankbaits is not something that just works in the Dakotas as there are situations and locations across the Midwest where this fun presentation excels at catching fish.