Have you Tried the "Ned Rig" 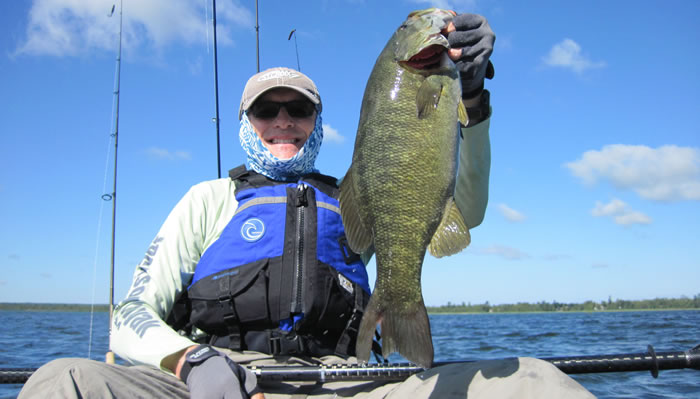 I began hearing about the Ned Rig, or, Midwest Rig late in 2015. It's named for Ned Kaedy, who is credited with developing it and using it with success for decades. It's maybe not quite as simple as swimming the Kalin's Lunker Grub, which has been so productive for me, but, still very simple.

Here's why I began using the Ned Rig early last August. In mid-summer most of the better smallmouth bass fishing in Green Bay and Lake Michigan in Sturgeon Bay/Door County is deeper than the less than six or seven foot depths I'm fishing in spring. I'm not a Drop Shot aficionado, and, with a coating of scum on the rocks even up to 10 to 15 feet of water, tubes can be a mess. Now that I have a home up there, I'm not just fishing in the spring anymore, so what to do? The answer is the Ned Rig. This is fished somewhat similar to a tube, but, when using the Z-Man plastics, which are buoyant, it stays out of the scum. The bonus is that this works great in shallow water as well.

Z-Man's proprietary ElaZTEch material is remarkably soft, pliable, and 10X tougher than traditional soft plastics. This unique material is also naturally buoyant and floats up off the bottom, creating a more visible, lifelike and attractive target to gamefish. And, environmentally, it contains nothing bad and is non-toxic. I plan to try a variety of the Z-Man products, but, the success I've had so far has come with the Finesse TRD and the TRD TubeZ, both small profile and 2.75 inches long. The Finesse TRD is a short stick lure and the TubeZ is a tube. 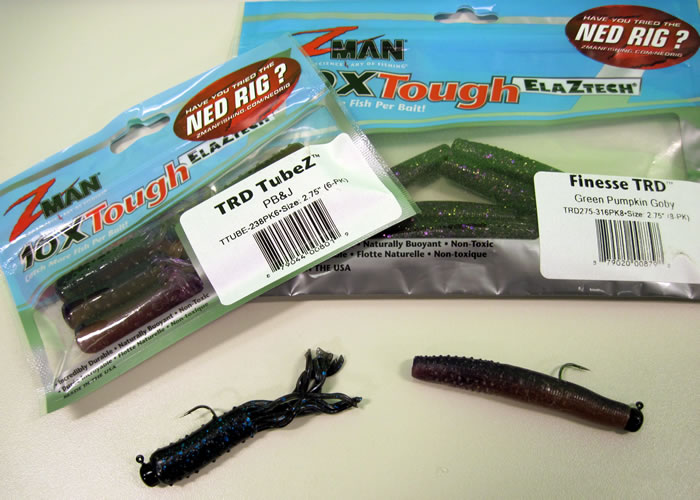 I fish both on either a 1/16th or 3/32nd oz. jig with a #1 hook. I used both the Gopher Tackle jig and the Z-Man Finesse ShroomZ jigs. Both of these worked well. My rod of choice is a 7' St. Croix medium-light or medium power with a fast or extra-fast action. I think you could experiment with the line, but, I use what I use with the Kalins and the fluorocarbon leader. I also use the same spinning reels I use with the Kalin's.

I have fished the Ned Rig in two very different scenarios. In Door County and the big water, I fished it in 8 to 17 feet of water. I cast 50 to 60 feet, let sink to the bottom and then used very slight twitches and sometimes a little hop. All the time working it very slowly back to the kayak or boat. Near the vessel reeling in and repeat. Other presentation variations are swim and glide, drag and deadstick, straight swim like the Kalin's, and, drag and shake. I'll be giving these a try in a few months. 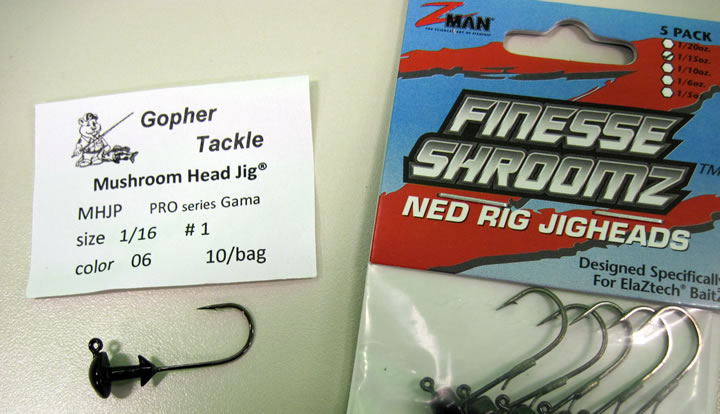 The other scenario is rivers. These were smaller rivers, so, casts were shorter. I'd cast somewhat perpendicular to shore and slightly up river. With the easy to moderate current and the twitch or hop retrieve, it was resulting in catching many smallies. In general, working it in a subtle manner seems best. Wave action and river current can do some of the work for you with this presentation.

Here are the stats for my first three times out with the Ned Rig in 2016. August 1st on Green Bay. Seven hours in 8 to 17 feet of water in one fairly small area. 60 smallmouth bass with a number in the 4+ pound range. August 26th, three hours on a small river with the TRD TubeZ. 66 smallies with many in the two pound range, which is big for this small stream. And, finally, September 2nd, five hours, again one small area in 8 to 17 feet of water. 52 smallies with a number at 4+ pounds on Green Bay. In addition to the three outings mentioned, after September 2nd, I had at least another 10 successful efforts for both largemouth and smallmouth bass. On one lake east of Milwaukee, Wisconsin the Finesse TRD also produced a few nice sized perch and bluegills. Both the Finesse TRD and TRD TubeZ also found the jaws of some nice Northern Pike. This coming season, I wouldn't be surprised to also catch a world class walleye or two in Door County.

If you wade fish, kayak fish or fish from a powered boat, and have the pleasure of chasing smallmouth bass or largemouth bass, give the Ned Rig with Z-Man plastics a shot. Have fun and be sure to let me know how you do. [email protected] 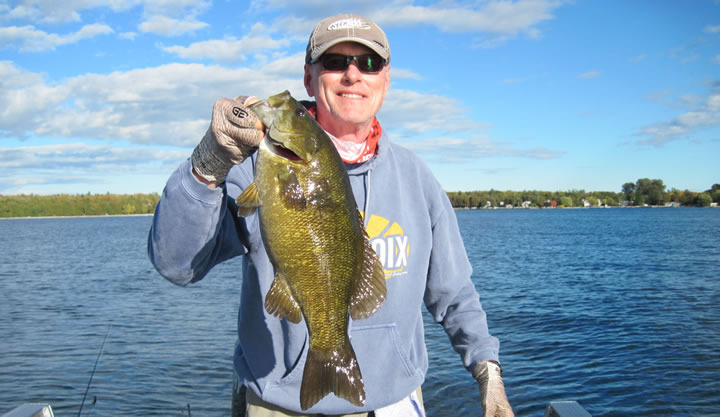