By Scott Stankowski - May 2, 2017
Florida magrove flats fishing offers an excellent change of pace for the Midwestern angler. 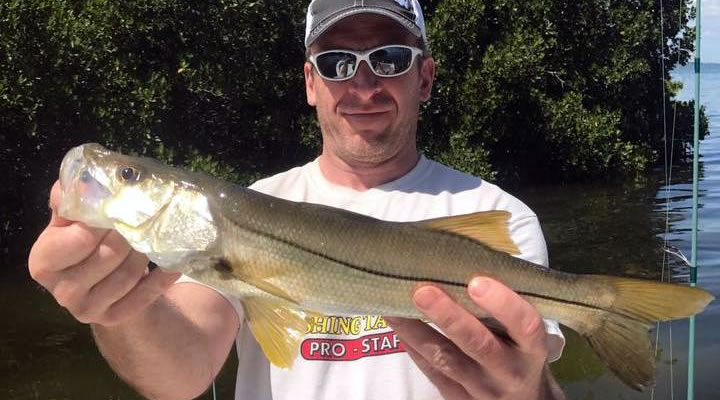 Recently while in Florida we headed to Tampa Bay where we met Captain Wade Osbourne of Afishionado Guide Service for some trophy flat fishing.Prior to our trip I contacted Captain Wade to set up our trip. He was more than happy to let me know what to expect and sent me updates via text as the date approached.

Kara and I were excited to head out into the bay to see what it had to offer.

We met Wade at the boat landing mid-morning. He had already been out for several hours collecting bait which basically consisted of small minnows. I likened them to small alewives from Lake Michigan.

We headed out across the bay which averages about 8 feet deep and ventured to the east shore. The bay itself is quite heavily protected by the FWS or the Florida Fish and Wildlife Commission.

As we approached the shoreline, you could see oyster flats exposed as the tide was low, you could also start to see where the channels were from the current and where the grassy areas were. Getting close to shore you had to rely on your trolling motor according to the rules.

We almost immediately started to see Mullet jumping everywhere. The mullet is a vegetarian that relies on the grass for nutrition. When Wade took us over the edges of the flats into the channels he started to identify our targeted species of Redfish, Snook and Sea trout.

We also saw two rays and several sheepshead or prison fish. Wade knew where the fish were stacked and we set up in a hole that was about 5 feet deep and loaded with snook.

Snook are ambush predators and can be fished in a variety of ways from fly fishing to using flashy lures to live bait. What we did was to use 20 pound monofilament with a circle hook. Wade would take a bunch of minnows and place them in his chum thrower. He would toss out about 12 of them to instigate the fish into biting. He did a great job of instructing us on technique and we casted to where the fish were rising.

Shrimp could also be used as a bait but are a bit less effective than the baitfish. Snook and sea trout bite 24/7 so there is no need to get up and out on the charter early. A good charter captain like Wade watches the tide charts and tells you when the best time to be out is.

We almost immediately had hook ups. My biggest problem was setting the hook. With a circle hook it is not necessary to set a hook like a traditional fishing style has taught, instead one is to just feel the tension and reel in and the fish will be there.

As we were catching snook on our rigs we caught a few sea trout as well. The minimum size for the trout was 15 inches and the snook had to be 28 inches and no more than 32. The state has an aggressive structure to their fishing and as a result there are an abundance of fish. 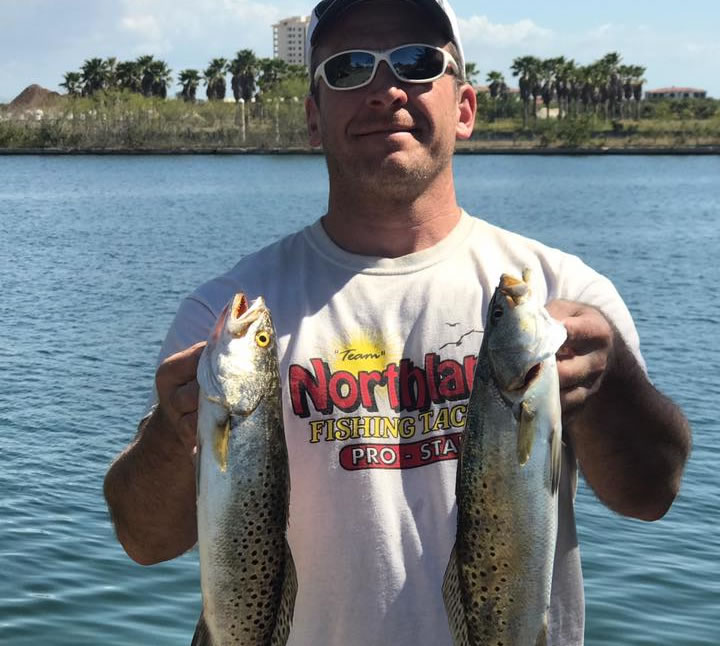 Every single cast nearly resulted in a fish. We were using medium action rods and the drags were screaming as the snook would take runs away from the boat. In addition the fish were acrobatic as well.

We were within 100 yards from shore so a plethora of shore birds surrounded us with a chorus that was tropical. It was a rough way of life and one I could easily get used to.

Occasionally we hooked into a sea trout and were fortunate enough to keep two for table fare. We never did get a big enough snook and did not measure any but I would guess our biggest one was about 26 inches.

It is hard to imagine as I am writing this that one would get sick of catching fish but it happens and we wanted to get a red fish to complete our in shore slam. Wade took us out of the bay and we headed to another spot. On the way there we spotted a few enormous snook that had to been close to 20 pounds. We were going to make an attempt on it but a crazy mullet fisherman started stalking us. Wade asked him what his deal was and in a voice that was difficult at best to understand he said he could not control his boat. We moved on a bit looking for big snook and laughed as we listened to the mullet fisherman talk to himself.

We went for reds utilizing floats or bobbers. Reds have a tendency to hang around the mullets and near oyster beds. Wade threw out baitfish and we watched with interest. I did get one hook set and the fish was on. As the fish came out of the hole we realized it was just another snook and tossed it back.

No one was into the Reds that day as the boats were going into and out of the protected areas repeatedly. We did not see any rods bent over either and it was getting late. We decided to head back to shore, where Wade flushed the motor with fresh water and I cleaned up the fish.

Captain Wade would be back at it again the next day to catch this hot flat fishing while it was still on. Next up will be king mackerel and who knows what after that. That is the job of a guide to find the hot bite and Captain Wade put us right where we wanted to be.

Flat fishing is fun and intimate as you are in smaller boats and parties of fisherman. There is really no danger of getting sea sick as opposed to heading out into the open seas.

I can check the flat fishing off of my bucket list but would certainly do it again for the excitement and action that it carried. I will certainly only go with Captain Wade of Afishionado as it was nice to fish with a down to earth fisherman that catered to our needs. It was tough for us to even try to bait a hook or take a fish off as he was always right there. He worked for you and that is the sign of a quality guide.

Scott Stankowski
Scott Stankowski is the senior outdoor writer for centralwisconsinsports.net and produces weekly articles, typically highlighting getting kids active in the outdoors. His family prides itself on living off of the land. Scott also takes the mantra into the classroom where he teaches environmental science at Wisconsin Rapids Lincoln High School. Scott and his sons have won numerous titles in turkey and deer calling at the state level. Scott and his sons have a national outdoor television show titled Growin' Up Wild and can be found on Facebook.
BITS & BITES
Advertise here