By Jason Mitchell - April 10, 2017
Arctic Shield Pro Staff Hunter Art Helin has hunted turkeys all over North America and has guided turkey hunters for over thirty years. With so many turkey hunts that blur together over the years and across such diverse areas throughout the Country, Helin is quick to point out so many regional nuances.

"We have seen where osceola turkeys pitch right into the open field at day break because of the amount of predators and that created challenging hunting conditions. Merriams on the other hand required different adjustments because you have to often call so much louder. Even eastern birds can act differently from one county to the other depending on terrain, predators, population densities and hunting pressure," explains Helin.

Break down the turkey season into three distinct windows and adjust your strategy in relation to the peak breeding season.
Particularly for eastern birds in his home state of Wisconsin, Helin stresses the importance of breaking down the spring turkey season into three distinct seasons... Early, Mid and Late. How you call, your overall strategy and how you use decoys has to line us with the breeding cycle of turkeys much like hunting whitetails during the rut. Think pre breeding, breeding and post breeding for breaking down each turkey season.

"Back in the day, many of the hen decoy poses were very upright and alert and that was all we had but as turkeys have become more educated, I have switched to using more relaxed and feeding poses," explains Helin. Helin is also a fan of mixing in a semi-strut jake decoy in with the hen decoys. "I am not as much of a fan of full strut tom decoys early in the season," stresses Helin. Keep calling soft and sweet, use a lot of purrs and clucks.

As the spring moves into the heart of the breeding season, hunters need to play the jealousy factor. A tried and true decoy arrangement is a half strut jake decoy on top of a breeding hen decoy. Full strut tom decoys also begin to trigger aggressive responses from other toms. Helin believes that this window of time allows hunters to kill some of the oldest birds. As hens begin to disappear and nest, this opportunity builds and than falls off. Calling can be much more aggressive but don't overcall when birds are committed. Helin stresses that aggressive calling might trigger a reaction out of both hens and gobblers but if you stay aggressive, birds often hang up. "If you don't back off, the bird you are calling to will expect you to come to him so be patient and soft after birds commit." 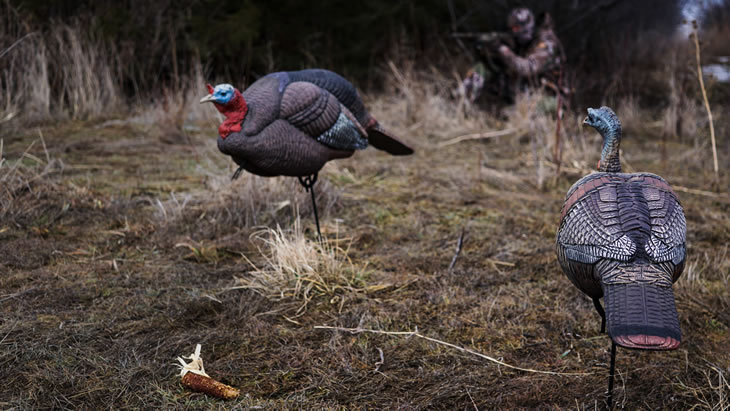 Ultra realistic decoys have changed turkey hunting over the past decade. Half strut jakes and relaxed hen poses are universally effective throughout the season. Pictured are the Dakota Decoy X-Treme Jake and Hen Decoys.
The post breeding period is the tail end of most spring turkey hunting seasons. By now, birds are tired of fighting and have often been hunted. Late in the season, toms and hens will often roost close together and can be tough to get between right away in the morning so hunters might have to be much more patient to kill midday or afternoon birds. Helin recommends just using hen decoys during this time. Get rid of the jakes and hens and just use breeding hen or feeder hen decoys. Calling has to revert back to soft and sweet. Soft clucks and purrs but remember that toms can get real quiet during this time.

"You have to remember that these birds have all been fighting all spring and they often just get tired of confrontations by this time," explains Helin. So often birds will come in silently without gobbling. If they see a another tom decoy, they just turn around and slide away. These birds will really sneak in.

Passion for the Hunt begins airing in July of 2017 on Fox Sports North.