By Dennis Foster - April 5, 2017
Lake Oahe has a well-deserved reputation as a walleye factory. And rightly so. No matter what Mother Nature throws at it or how questionable the management decisions the Corp of Engineers makes; this expansive Prairie reservoir just keeps churning out plenty of toothy, glassy eyed and oh so tasty walleyes. And lots more too.

The potential for trophy sized pike, those reaching and even far exceeding 20 pounds is as good as anywhere on the continent. Folks are just starting to discover just how abundant the crappies are. Big fish too with 13, 14 and even 15 inchers, becoming commonplace. The smallmouth fishing remains all but untouched with extremely good numbers and quite respectable size. Toss in cooperative silver bass and all the channel cats one could ever hope to catch and you have a pretty wide selection to choose from. Odds are high you will catch some specimens of each on most every outing. 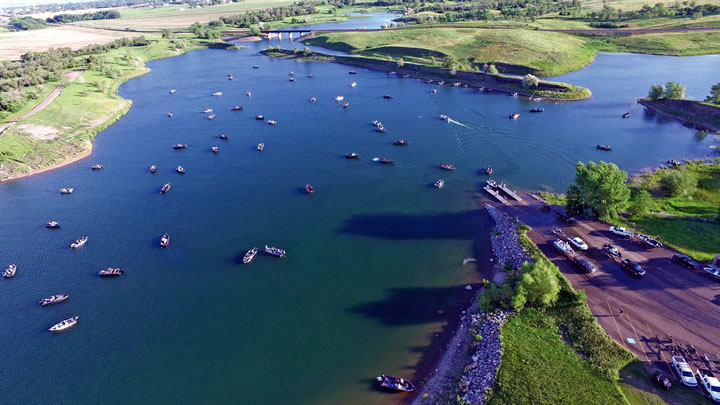 Balance is an ongoing struggle, but one the Reservoir always seems to sort out for itself. By this, I am largely referring to the importance of ample forage. There are natural ebbs and flows in baitfish populations and with these so goes the fortunes of the gamefish that rely on them. Along with factors beyond Man's control, such as weather; all of the fish are affected by Man's actions in the form of water management. A prime example of this would be the ill-fated planning on the part of the Corps of Engineers in 2011. In a nutshell, they grossly underestimated the amount of water flowing into the system. They had to open the floodgates on Oahe (the very first time the emergency spillway had ever been used) and along with the torrent of water, went a good portion of our smelt and untold numbers of game fish.

The good news is that the big lake once again showed its resiliency when faced with adverse conditions. In the absence of cold water baitfish, such as the now decimated smelt, lake herring showed a dramatic increase in population and helped to supplant that resource. The gamefish themselves also displayed their ability to adapt and began keying on other prey species such as gizzard shad, emerald shiners and young of the year panfish. In keying on the panfish offspring, a good portioin of the walleye's simply transitioned shallow. Very shallow at that. Often in as little as 2 to 10 feet in the warm water found at the backs of bays. Making their living off of this clearly plentiful and more reliable source of protein. Providing those anglers with a willingness to go beyond most fisherman's comfort level an all but untouched and largely overlooked population of walleye's of which to capitalize on.

The entire reservoir offers excellent Walleye angling, but of particular note is the Northern half of the lake. If we were to divide the lake into two distinct sections, the highway 212 bridge west of the town of Gettysburg or what is commonly referred to as Whitlock Crossing would be a logical spot. The name is derived from the fact this is where the Whitlock family operated a ferry crossing the Missouri River long before automobiles and bridges. From this point south, the water gets progressively deeper, the structure breaks sharper and is a bit more sterile. Travelling north, we begin to experience a shallower more fertile environment, and in my opinion, more consistent fishing success.

Of particular note are the large creek arms, river arms and bays. The most notable and all conveniently within easy reach of the fishing areas I will highlight from south to north from the Hwy. 212 bridge are as follows: Whitlock Bay, Swiftbird Creek, Swan Creek, Moreau River, Blue Blanket, Grand River, Oak Creek, Pollock Bay and State Line Bay at the furthest point north at you guessed it, the South Dakota and North Dakota boundary. This list is far from all inclusive, but are great starting points with hundreds if not thousands of other viable nooks and crannies nestled between them to explore. The great part is that they will all hold good numbers of fish on any given day. You just need to bounce around to locate actively feeding fish.

Aside from the exceptional fishing to be found on the water, there is also plenty of enjoyment to had on shore. The entire corridor boasts the friendliest of folks offering comfortable and affordable accommodations complimented by some great eating options. You will no doubt agree the steaks served throughout the area are as good or better than can be found anywhere. These are little gems in the form of fishing communities to be found up and down the Reservoir.

From the 212 bridge and heading up river, you first have the Whitlock's area. Here you will find two steakhouses, two motels, two bait shops and another lounge with lodging. There are also more permanent housing options sprinkled throughout. You can then head straight up Hwy. 1804 to Akaska. Affectionately and dare I say-accurately, known as the little drinking town with a fishing problem. Two bars and eating establishments-one with a bait shop-along a 3 block long main street are strong evidence of this. From there you continue on up 1804 to the little resort community of New Evarts which has a good steakhouse and lounge along with a Motel. It is only a bit further north to Mobridge, the "big" town-if you will-along the stretch that offers everything you could ever need or want. It is also notable that their Chamber of Commerce is very proactive in promoting the wealth of recreational activities that the big lake provides. To that end, they have generously stepped up in providing logistical support for the Northern Oahe Walleye Series, which coincidentally, all of the mentioned communities conduct extremely well run walleye tournaments that serve as qualifying events for the Series. Concluding in a Championship Tournament, based out of Mobridge, where Team of the Year honors will be awarded. Last but far from least is Pollock. It is interesting to note that this quaint, but not exactly quiet little village was actually relocated on higher ground to its current location as the advancing waters of the newly dammed Lake Oahe would permanently overtake the original town. These folks are a little off the beaten path and darn sure enthusiastically welcome visitors.

All locations have excellent well-seasoned guides who I would strongly recommend if you are new to Lake Oahe and wish to ensure success on your first outing. As an added benefit, you will learn some valuable fishing lessons as part of the experience. Another thing to note is that each of these locations have private campgrounds and beautiful state parks with camping facilities featuring excellent boat ramps and fish cleaning stations. Mobridge even boasts a year-round climate controlled indoor cleaning station.

I will admit to being prejudiced as I have come to know the folks in every community and their commitment to excellence quite well over the years. That is why I helped organize and firmly stand behind the entire concept of the Northern Oahe Walleye Series. I know exactly how these tournaments are ran and the amount of hard work and dedication that goes into making sure each goes off without a hitch. They are truly special events. With the added anglers we are attracting and along with their input, we are witnessing some positive changes and developments. One of them is the growing commitment of Sponsors to provide much added value in the form of prizes for the participants.

In addition to being well conducted, each Tournament offers a good mix of affordable entries and attractive payouts. These are all enhanced by the generosity of our Sponsors: Raymarine, Lund Boats, Mercury, Dave's Marine, JB Lures, ReefRuner Lures, Rod Select 360, Sodak Sports, Scheels and Moritz Marine. More will most likely come onboard before the first tournament of this, our sophomore season. I would encourage you to display your appreciation and support these thoughtful Sponsors whenever possible.

Schedule is as follows: Wolves on the Water June 3rd, Denny Palmer Memorial June 10th, Pollock Men's Club June 17th and 18th, Whitlock Bay July 8th and 9th, SD Walleye Classic July 21st and 22nd, and concluding with the Northern Oahe Series Championship in Mobridge on August 19th. Full information, contact information and entry forms for all tournaments can be found at www.northernoaheseries.com. If interested, I would strongly recommend entering just as soon as you can as each and every one of these tournaments will fill quickly.

Whether you are a hardcore tournament type or a fair-weather fisherman, the attraction of the entire area is equally compelling. If you are looking for a new destination or just haven't had the good fortune of being there lately-consider heading to the northern reaches of always amazing Lake Oahe... where the fishing and folks are always fine.

Dennis Foster
Dennis Foster is a Hunting/Fishing Guide and Outdoor Writer from Mellette, SD. If you would like to book a trip or have questions or comments, he can be reached through his websites www.dakotapheasantguide.com and www.eyetimepromotions.com.
TRENDING DISCUSSIONS
Advertise here
Advertise here
Please take a moment to visit our sponsors. Without them we would not be here.