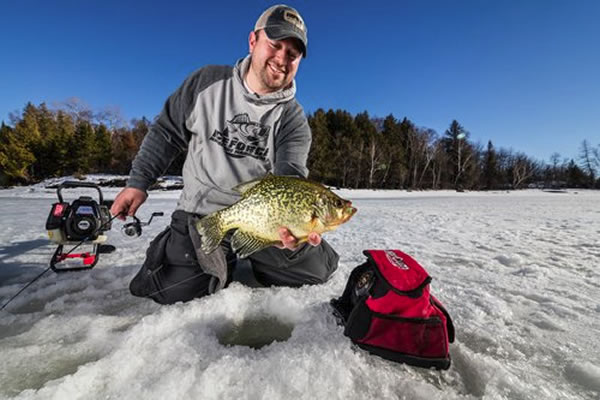 Think you know your ice electronics? Even if you're a seasoned veteran of the sonar world, here are some bits of advice that can help!
Photo by: Ben Larson - In-Depth Media Productions
Every year, a new set of anglers both young and old, learn to use ice fishing sonar or flashers for the first time. That said, I encounter many anglers on the ice each year that still have their ice sonar on default factory settings from when they bought the unit 10 years ago. Whether you're brand new to the game, or it's old-hat, here are some answers to age old questions and some new ones to keep it interesting.

How far down should I drop my transducer?

Conventional wisdom has it that for the best reading, you should put the bottom of your transducer just below the ice in the center of the hole. This ensures that your jig falls into the conic beam (cone angle) that forms at the transducer and fans out radially in expanding width the deeper you go. Practically speaking however, you want your ducer off to one side of the hole, and a bit up into the hole while still maintaining a clear reading. Too far below the bottom of the ice and centered in the hole, you're asking a fish to tangle in the transducer cord.

How deep is it?

While most people really want to know at what depth they're fishing, rarely does it matter. This is because now with a flasher, all of your depths will be relative anyway. You'll see your bait and its location in relation to the bottom. Move to shallower and deeper water, your frame of reference will still be scaled by your bait and its location to the bottom and possibly fish.

There can be any number of reasons, from improper depth range, to low gain setting, to the transducer being too far to one side of the hole and not pointed straight down.

How high should I turn my gain or sensitivity?

The rule of thumb here is to turn it up and down, until you find the point where your jig just barely appears as a solid, crisp target, threatening to disappear. Too high and you're picking up unwanted signals from the rest of the water column. Too low, and you can't see your jig in relation to the fish that are after it.

Why don't I see my jig until I'm a few feet below the transducer?

Why can I drop my bait "below" the bottom?

To better understand sonar, you need to mentally grasp the footprint of your sonar cone, right where it makes contact with bottom. We all know that the lake bottom isn't flat as a pancake, so it stands to reason that one edge of your cone angle may be sounding at 15 feet, while the other edge may be in 18 feet of water. The steeper the break (tighter the contours) you're fishing, the more accentuated this effect is. The return you see on your screen shows the shallowest portion of the cone, meaning that you can appear to drop your bait below bottom. One of the best ways to counter this effect is to switch to a narrower beam or cone angle when fishing steep slopes. You can also zoom into bottom if that's the primary zone you're fishing, giving you a better view of that specific area.

When should I use zoom?

As far as I'm concerned, that zoom button should be locked in the "on" position for most angling situations. With digital sonar technology, zoom means more than a magnifying glass on the strike zone, it actually enhances the ability of the sonar engine to send, receive, and display minute differences in targets. It's the detail you can see when a gill flares its fins before a strike, when picking out sizes of crappies suspended down 20 feet in 50 feet of water, and when fishing belly-to-bottom walleyes that just barely flicker to reveal their presence at the outside edge of the cone angle. Get used to running your sonar in the zoom mode no matter what depth you're fishing and for what species.

How do I get "better" with my ice sonar?

While practice makes perfect, make sure to practice with a purpose. If you have access to an underwater camera, the very best thing you can do is to study your lure and a fish's reaction to it both on the camera and sonar simultaneously. While it is becoming increasingly easier to tote lightweight and portable cameras around ice, your sonar becomes a much more efficient tool when you realize what subtle movements your bait and the fish that are relating to it can mean. Simple concepts like the swing of your jigging stroke become much more apparent when you can translate the real view (camera) to a representation of it (sonar). In deep water, while your target appears to move a very small amount on sonar, your pull may be an actual 3 feet.

Your ice sonar is a great tool to help make you a better angler, but only if you take the time to learn how to use it properly. We can pound a nail with nearly all sides of a hammer, but one way works markedly better than the others.

Joel Nelson
Joel has been fishing the bulk of what the ice-belt has to offer for more than 25 years. Advanced degrees in the Natural Sciences, including Fisheries and Digital Mapping Technology allow him to both think like a fish and find them, sharing in print and video the tools necessary to locate new bites on undiscovered bodies of water. Joel has been cutting against the grain since he used his first ice-flasher at age 10. For years he toured the ice-scape for the popular TV series In-Depth Outdoors, fishing the finest waters with the best guides and pros. Before and since, he's been a maverick amongst ice-heads, always looking for the next tactic or destination, while pioneering new takes on existing techniques to catch more and bigger fish. Joel currently publishes weekly tips, tricks, and hacks to make you a better angler at www.joelnelsonoutdoors.com, while answering angler-questions via the popular "Ask Me Anything" segment of his website.
TRENDING DISCUSSIONS
Advertise here
Advertise here
Please take a moment to visit our sponsors. Without them we would not be here.