By Jason Halfen - December 19, 2016
With the arrival of hardwater across the northland, the much-anticipated ice fishing season has finally begun. Intrepid anglers, with ice picks draped over their shoulders and lightweight gear in tow, are now creeping across the shallows of their favorite lakes in search of the season's first frozen success stories. 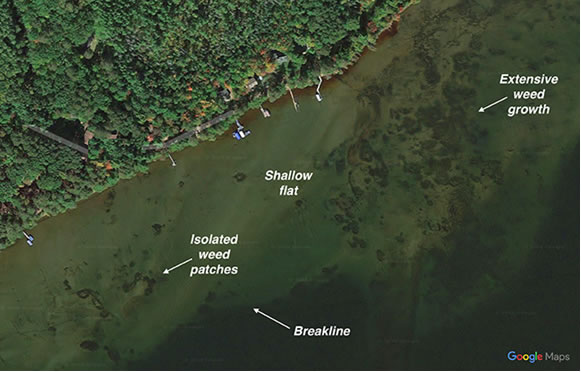 Visible satellite imagery, readily available on Google Maps or similar platforms, takes the guesswork out of searching for shallow water, early ice walleyes.
Many early-season walleye hunters are immediately drawn to the weed-studded breaklines that rim deeper basins; textbook locations that will produce apex predators for much of the season. However, these anglers are also walking right over large numbers of relatively unpressured walleyes that continue to prowl shallow flats during the first few weeks of ice.

Want to learn how to find and catch those fish? Read on! 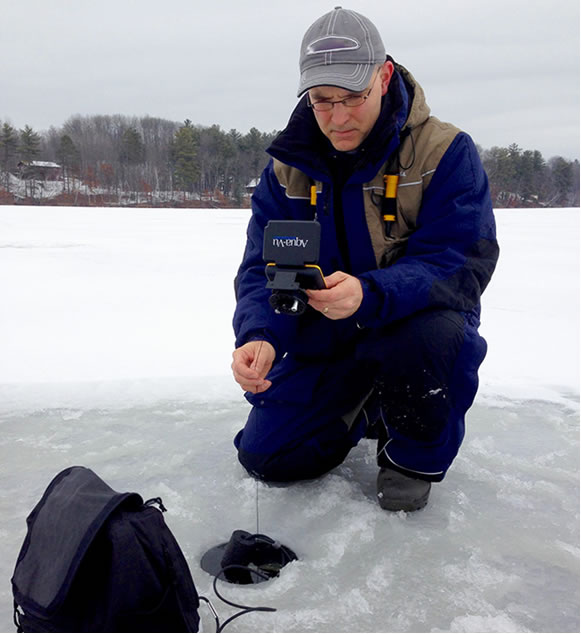 Robust, green weeds will hold far more walleyes than decaying, brown ones. Crystal-clear Aqua-Vu underwater video will help you to rapidly identify the most productive early ice weedbeds.
Preparing to pull walleyes through an eight-inch hole in the ice, with only a few feet of water beneath, begins not on the water, but at your computer. This is one of the times that I make extensive use of satellite imagery to visually inspect the shallow areas of clear lakes, looking specifically for flats or bays that have distinct patches of heavy weed growth. The larger these patches are, the more baitfish they will harbor, and the more walleyes they will attract.

Turning these satellite-located weedbeds into easy-to-find fishing spots is simple: on Google Maps, just drop a pin where you would like to drill a hole, and then save that location. Now, open up the Google Maps app on your phone or mobile device, and presto: the magic of 21st century technology has your future-8-inch-hole-location displayed in its correct position, making it easy to find when you hit the ice. 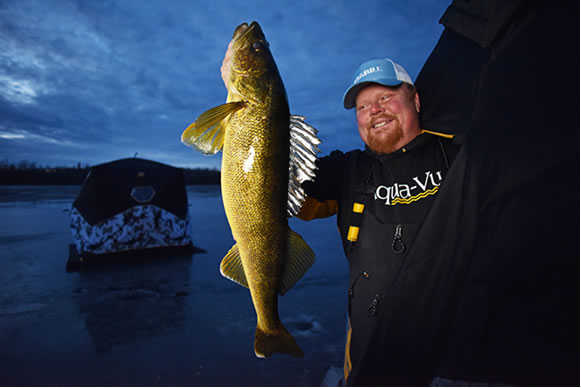 Frabill/Aqua-Vu pro Brian "Bro" Brosdahl is bullish on weed-wandering first ice walleyes. He, like the author, studies the underworld with a camera searching for green weeds and edges.
This shallow weed pattern is all about timing. Of primary importance is time of day; large numbers of walleyes will generally not be available during bankers' hours in just a few feet of water. Indeed, this is a low-light pattern, so plan to hit the ice in midafternoon, drill ALL of your holes at least an hour before the sun hits the treetops, and then settle in for the evening rush.

I recommend that you drill at least 3 times as many holes as your local regulations allow you to fish at any one time, which will make it easy to relocate your efforts quickly, without additional drilling noise when the bite fires up.

On our local Wisconsin waters, where three lines are allowed per angler, a group of three might be drilling out 30 holes, giving them comprehensive coverage of several weedbeds on one shallow flat.

We make extensive use of Aqua-Vu underwater camera systems to ensure that the weedbeds feature robust, walleye-attracting green weeds rather than fish-repelling brown ones. Underwater video is also a powerful tool for fine-tuning hole position. Over the years, we've found that holes positioned 8-10 feet of away the weededge to be the most productive. When holes are too close to the greenery, active minnows beneath tip-ups will constantly become entangled. In contrast, baits presented too far away from the weedbeds don't get noticed as frequently by edge-patrolling predators. 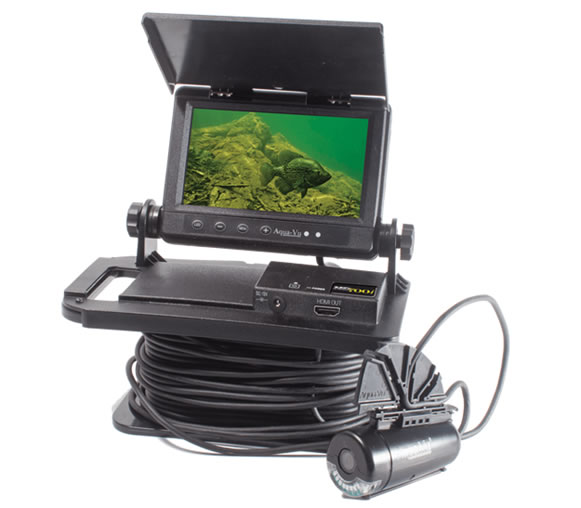 New new Aqua-Vu HD 700i captures underwater detail like no other camera before it.
Each angler in your group should plan for one "active jigging" line, with the balance of their presentations being setlines, generally in the form of tip-ups. Shallow, early-season walleyes are generally aggressive, so use a jigging presentation to match their mood. We like to call walleyes into our spread using LIVETARGET Golden Shiner Rattlebaits ripped through the bottom two feet of the water column. Have the rattlebait pound the bottom every few rips. This will create a suspended cloud of sediment, which serves as a persistent visual cue that a vulnerable bait is nearby. The internal weighting system of the LIVETARGET rattlebait ensures that the bait settles to the bottom belly-first rather than rolling onto its side, which dramatically reduces the number of times that a sticky-sharp treble hook catches the leader. A stout St. Croix Mojo ICE Rod, like the MIR32M, paired with a spinning reel featuring a smooth drag, is an excellent combination for presenting actively-jigged baits and for subduing shallow walleyes and pike.

St. Croix Mojo ICE
For setlines, we rely on Frabill Classic Wood Tip-Ups, which feature hardwood bodies and robust metal components that stand the test of time and the elements. Since we will be fishing through dusk and into the first hour of darkness, each tip-up flag gets dressed with a Frabill Arctic Fire tip-up light, which makes bites easy to identify after dark, even from a distance. 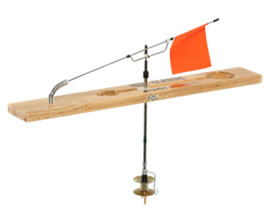 It's important to respond immediately to a flying flag, as a nonchalant attitude will result in the fish retreating to the relative safety of the weeds. On the business end of the set line, include an 18" section of 10 lb Seaguar AbrazX Ice dressed with a Trapper Hook #2 Livebait/Finesse/Dropshot Hook. The unique Trapper Box, with its pair of right angle bends at the base of the hook, ensures that your shiner or sucker minnow remains in perfect position on the hook, rather than riding up and down the shank. More importantly, however, the Trapper Hook's unique geometry dramatically enhances the the retention of hooked fish when compared to a traditional J-shaped hook, as fish flesh and bone remain locked within the Trapper Box. 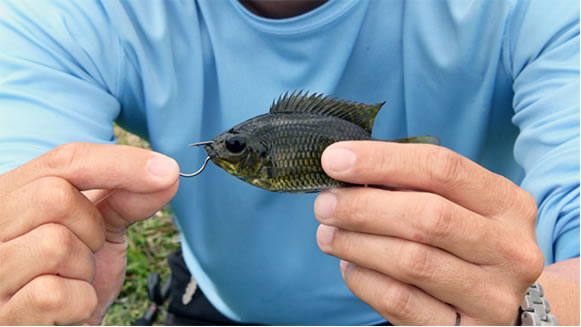 The Trapper Live Bait/Finesse/Dropshot Hook might be the most versatile hook on the market, tackling chores from ice fishing to freelining on the open seas.
Dabbling among the shallow weeds is a distinctly early-season pattern. Once the ice cap grows to about 12 inches in depth, or a thick blanket of heavy snow covers the shallow flats, this pattern falls apart. Under these conditions, the baitfish that shelter among the weeds, and the walleyes that are munching on them, will make tracks for the weed-studded breakline and the relative stability of deep water.

If you want to experience the excitement of catching aggressive, shallow walleyes through the ice, the time is NOW. Get those batteries charged, pick out a few likely locations, and let's get to work before we get stuck sharing deep weedline fish with everyone else!