Early Ice: A Quiet and Productive Time of the Year

By Jerry Carlson - November 22, 2016
It was mid-morning when I stopped to pick up long time fishing companion, Charlie Simkins. Although the air was cool, this particular winter day did not have the bite to it we sometimes feel in early winter. After a short greeting, we loaded Simkins' gear into the truck and we were off.

Our goal for this particular day was quite simple. We were going to look for walkable ice so we could get that first ice fishing trip under our belt.

Our options were somewhat limited. The late start to the winter had kept many lakes open longer than normal. However, there are always a few lakes that tend to freeze earlier than others. Our plan was to check out these bodies of water first. 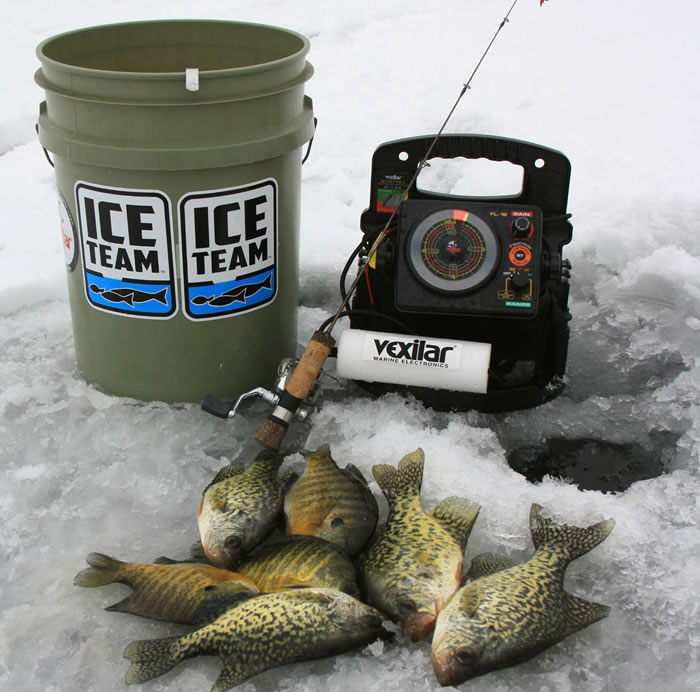 Early ice is a quiet and productive time to be on the ice.
Fifteen minutes later, we arrived at a popular winter fishing destination not far from Simkins' house. To our surprise, there was one lone four wheeler on the ice and nothing more. A quick examination of the shoreline indicated that a number of people had been walking out.

With PFDs on and our gear loaded into a couple of Fish Traps, we began the trek out to the deep basin we typically fish. We stopped a couple of times to check the ice thickness. Four to five inches greeted us every time.

Once at our chosen location, we began the process of searching for fish. One of us dribbled water on the ice while the other ran the Vexilar. By placing water on the ice for the transducer, one can easily shoot through the ice and get accurate readings of the water column without drilling holes.

After locating suspended fish, we drilled out a dozen holes and prepared to begin the winter fishing season. Using our standard gear of two-pound-test Berkley Micro Ice, tiny Drop jigs and Maki plastic, it didn't take long for us to have panfish flopping on the ice.

As we roamed from hole to hole looking for aggressive fish, we kept up an intermittent conversation. Our casual comments took us in many directions, but focused a great deal on the lack of activity on this lake. 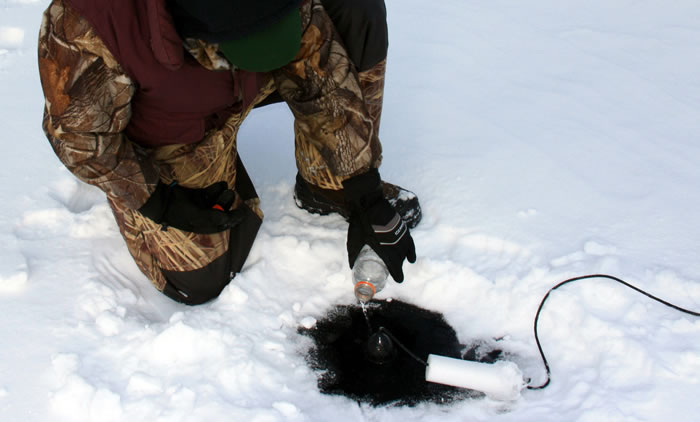 By pouring a little water on the ice for the transducer, it is easy to take readings without drilling a hole.
In a couple more weeks, we both knew what it would look like at the location we were fishing. The ice would be holding 40 to 50 fish houses and would be a hotbed of activity. Even mid-day periods would be busy.

That is one of the beauties of early ice. Not only does a person get to enjoy the tug on the line from feisty fish, it is also a quiet and peaceful fishing event with little pressure from other eager anglers. It is a chance to fish those ideal locations I tend avoid later in the season.

The early ice is one of my favorite panfish fishing periods of the year. Between lack of pressure and cooperative fish, it is hard to beat the first few weeks of the season.