Live Ducks: The Only Judges That Matter

By Traditions Media - September 28, 2016
To consistently call ducks into range while hunting, try sounding like one...

I pity the up-and-coming duck hunter, anxious to learn the intricacies of calling but with nowhere to turn for guidance but YouTube and calling contests. While such resources occasional offer a handy tip, most are so crowded with useless chaos they're often difficult to watch all the way through.

Somewhere along the line, it seems, duck calling contests began rewarding contestants for performing instrumental symphonies on duck calls, rather than for sounding like a duck. So became the accepted measure of success within the industry: Champion callers are often those who can manipulate a duck call to sound the most extreme, not necessarily those who produce the sounds that consistently put the most ducks on the strap. 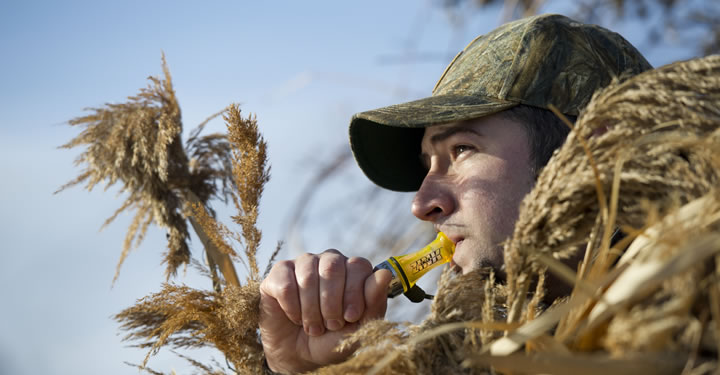 A utility call like Zink's Mallard Drake Whistle is an inexpensive way to create additional realism in your calling sequences and put the odds in your favor when calling numerous species.
Practical ways to consistently call ducks are increasingly becoming lost in our modern teachings. As ducks in the wild never perform machine-gun feed chatter or ear-piercing hail calls, it stands to reason that our calling shouldn't either. To consistently be successful in the field, hunters should first master the basics of calling, and then learn when to further expand their auditory offerings.

After literally thousands of hours listening to live ducks in and around refuges, one thing becomes abundantly clear: Ducks make very basic noises the vast majority of the time. Of all puddle duck species, hen mallards are the most vocal, and the most imitated by hunters. The basic vocalizations of the hen mallard can be broken down into three categories.

The Hail or Greeting Call

The hail call is the basic greeting call hen mallards use to encourage other ducks, often flying overhead, to come join their group. This call usually consists of three to seven notes ("KAH, Kah, kah, kah, kah…"). The first or second note is nearly always emphasized, and the sequence often tapers off in volume and tone.

Greeting and hail calls should always remain realistic in tone and sequence, but can vary greatly in volume depending on the particular hunting setting and the distance to the birds being called. When hunting over expansive areas of water or large fields, for example, hunters who really let this call sing can often turn birds from incredible distances and heights. The Zink NBG call specializes in this, as its design responds well to a huge volume of air. This single-reed monster also features Zink's proprietary Z-Cut tone channel, which prevents sticking by moving air through the reed, regardless of how much moisture is in the call.

The greeting or hail call is most useful in attracting the attention of ducks passing by and turning them towards a decoy spread. The same call is equally effective when used to redirect ducks that may have flown over the spread, and are debating leaving the area. This method, called calling on the corners, refers to the use of a hail call just as the birds are beginning to turn away. It can be tricky to master the timing, and hunters should note that the same sounds are used throughout the sequence, although they can and should be toned down once ducks are circling in tight.

Smart hunters often switch from wide-open large-volume calls to models designed to sound their best at softer volumes when birds are in close. Zink's ATM Green Machine call is the Ohio-based company's bestseller, and for good reason. A superb finishing call, this double-reed model makes the soft, sweet sounds that bring birds feet-down into the decoys, with just the right amount of volume for versatility.

The Zink ATM call is the company's bestseller, and for good reason. A universal device, the ATM can get raspy and low, and features Zink's Z-Cut tone channel to move moisture away from the reed and preventing sticking.

Ducks quack for a lot of reasons ("Qu-aaat") and do so regularly. This single sound plays a Swiss-Army-Knife role in duck calling, and mastery of this basic vocalization is incredibly valuable and underrated in the world of waterfowl hunting.

Hen mallards often quack when they first land in a decoy spread or with real birds. They will also quack when seeking or directing their young - often well into the hunting season. In addition, hens may frequently quack when a drake approaches them late in the winter when breeding couples begin paring off. Finally, hen mallards also quack when alarmed or while taking off.

A single quack call, repeated about once every second, is an assurance call that can seal the deal on birds circling in tight. It allows hunters to keep a little chatter going with the birds as they make their final descent, and actually works to calm down members of the hunting party and allow the birds to settle in to the kill hole, preventing premature shots. The next time ducks are debating landing in your spread, try quacking them down right into the hole.

Without question, the feeding call, or feeding chuckle, is the most misunderstood and misused call in duck hunting. True feeding calls are a series of short, pressurized tongue-taps ("Tet-tet-tettet-tet…"). Nearly all modern calling resources, however, insist that the feeding calls of ducks are long, drawn out, machine-gun affairs, where the caller occasionally rolls their tongue throughout, or exhibits incredible air control to prevent doing so. Thankfully, the true sounds mallard ducks make while feeding are simple, single "tets" as they swim or walk around, pecking like pigeons or scooping up floating matter. 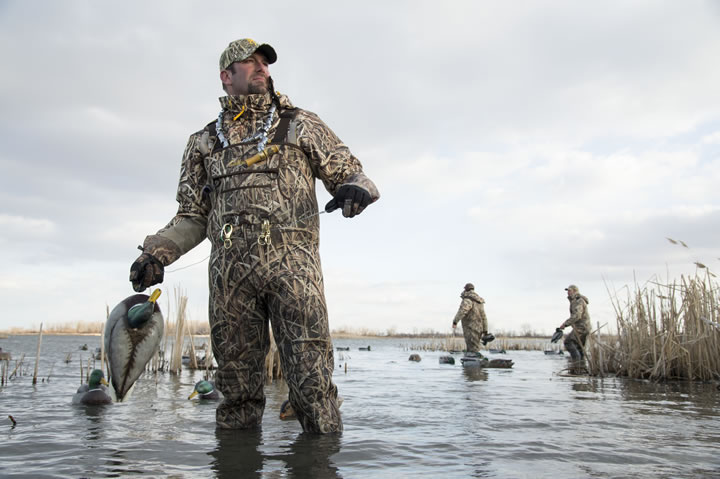 Hunters in vast, open areas need to attract the attention of far-away birds. The Zink NBG does so by accepting large volumes of air from the caller, and turning it into greenhead-turning hail calls.
Faster feeding calls can be used to mimic large groups of ducks, but be sure to incorporate a large decoy spread in an area known for heavy feeding to aid in realism. In addition, the use of decoys mimicking feeding birds can help to sell your trap. Avian-X Topflight Mallard Backwater Packs contain active feeding poses that effectively portray feeding birds. Jerk rigs nearly always help the cause, too, giving live birds the impression that they're missing out on a good opportunity.

A good feeding call can be used to convince circling birds to commit. Use it in conjunction with the single quack once the attention of the birds is turned toward the decoy spread. These light calls are best performed with a low-key call like the aforementioned Zink ATM, or the Zink Double Magnum Power Hen PH-2, known for it's deep, raspy realism. Feed calls often have the greatest effectiveness late in the season, as ducks need increased nutrition to fend off cold temperatures and recover from energy-draining migrations.

Hen mallards get all the press when it comes to duck vocalizations, but they aren't the only birds using sound to communicate. Drake mallards produce a throaty, filtered whistle ("weejsht, weejsht") most often heard when they are alone or in situations of reduced visibility like twilight or dense fog. Again, hunters can use this call to bring ducks down into the hole. It's also incredibly effective on quiet, still mornings, and can be magical on pressured birds.

Other species of ducks vocalize very uniquely. All species of teal "peep", while American wigeon use a three-note whistle, with emphasis on the second inflection, to communicate. Pintails talk through a throaty whistle that takes a bit of practice to produce.

The good news is that all of these unique duck sounds can be mimicked with one call, the Zink Mallard Drake Whistle. This unique looking device - with the shape and coloration of a drake mallard head - is an inexpensive way to create additional realism in your calling sequences and put the odds in your favor when calling numerous species.

Duck hunting can seem complicated, complete with more variables than we can mentally manage. It isn't, so don't make it that way. Becoming proficient with the hail call, basic quack and feed call - and understanding when to use them - will get the job done in the field. After all, hunting isn't a competition, and the only judges that matter are the birds. 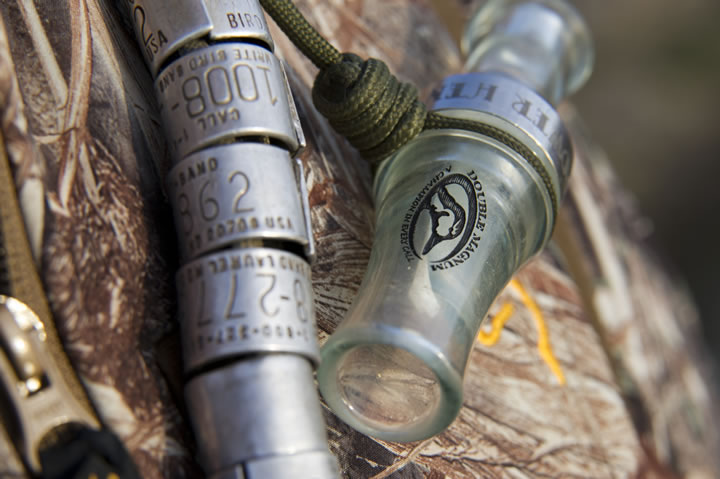 The Double Magnum call from Zink is an ultra-realistic, raspy low-tone machine used for bringing close ducks closer. Feed calls and soft quacks are easily duplicated with this gem, landing ducks in the hole and affording hunters high-percentage shots.
Traditions Media
We specialize in creating and communicating the most compelling stories in the outdoor industry
BITS & BITES
Advertise here
Advertise here
Please take a moment to visit our sponsors. Without them we would not be here.