By Traditions Media - September 1, 2016
How to stay ahead once the pressure sets in

September is right around the corner, and skies are filling with waterfowl. And, although early season hunts occasionally involve uneducated birds willing to commit to any spread, rarely are things that easy.

It's incredible how fast ducks and geese get wise to hunting pressure. A true credit to the resilience of nature, these birds often change daily patterns immediately with the first sign of hunting and become reluctant to land anywhere but in the neighborhood park.

Hunters can up their odds in a number of ways. Staying concealed is always the first order of business when waterfowl hunting, and accurate gunning is a key component to putting birds on the strap. But first, however, ducks and geese must buy what we're selling, and decoys are central to this grand scheme of deception.

Along with good calling, it's decoys that catch the attention of the birds we hunt. Moments later, the same decoys convince the birds to take a better look. And, in the end, it's our decoys that bring our quarry, feet-down, into gun range.

Today's blocks are the most realistic ever built, but there's more to sealing the deal than seductive poses and pretty paint. The real key to decoy effectiveness isn't their individual appearance; it's their overall look.

We all want our decoys to look like real birds. Marty Dietz, a Minnesotan with a bad case of goose fever, says the best way to accomplish this is to record and study images of live birds. "When scouting, take pictures of birds in the field you're hunting," he advises. "This allows you to see the numbers, locations and positions of individual birds." By basing his decoy spreads on his photos, Dietz knows he's exactly mimicking the real thing. 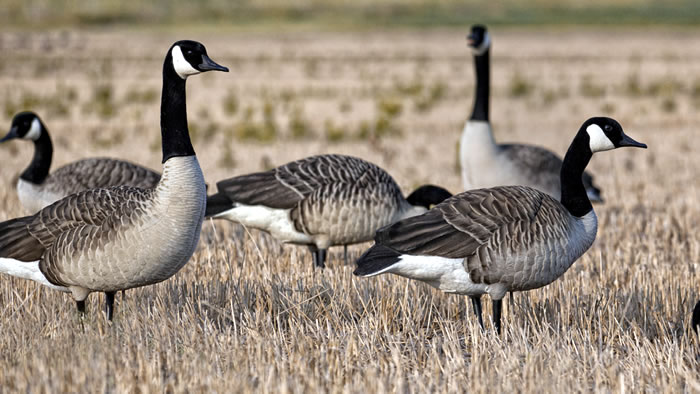 Flocks of Canada geese are made up of smaller, family groups in the early season. Imitate the overall structure of the flock by spreading several small groups of decoys throughout a field.
Early season groups of geese usually contain numerous small family groups that often land and feed on their own. Decoy spreads should match, with small clumps of a half-dozen phonies spaced throughout a field.

This is the time of year when feeding is heaviest, as geese are hitting numerous food sources and packing on the pounds while the weather allows. For this reason, veteran goose hunter Dee Draper of Utah does all he can to match such feeding scenarios. He advises mimicking live birds in the area, and key observations help do so. "A tighter spread indicates a lot of food, while an open and scattered spread indicates less." When representing heavily feeding birds, Draper recommends using a high proportion of feeding, head-down decoys.

The overall look of an individual decoy is largely determined by its design, manufacturing process and finish. These variables are, perhaps, most important in the early season.

"With a lot of sun in the early season, and the light dew around dawn, a painted decoy will shine as the sun comes up," Draper claims. This immediately educates honkers. For that reason, Draper and all other experts interviewed, rely on Avian-X fully flocked AXF Honker decoys.

While the ultimate goal is to set your blocks on The X - that spot on the spot where birds always seem to want to land - that's not always possible. When he can't be right on the mark, Draper presents two other decoy rigs to fool birds.

Big western river systems often congregate birds between feeding stops. Draper scores big in such locations by creating a resting-type atmosphere on a sand bar or island. Draper advises that, especially early in the season, geese like to drink and rest in areas just out of the water, and are often on low alert while doing so. Mimicking such mid-morning loafing activity often brings geese in on the first pass.

The right decoy spread in the right location can cause passing geese to change their plans. Draper and his hunting companions often employ a traffic rig to bring in geese traveling between their roost and primary feeding grounds. Again, utilizing fully flocked decoys, Draper attempts to create a scenario mimicking a group of birds on a hot feed. To do so, he uses a larger number of tightly-spaced decoys. The spread employs mostly feeding poses along with a single, head-up sentry. "An effective traffic rig portrays a lot of food," says Draper. 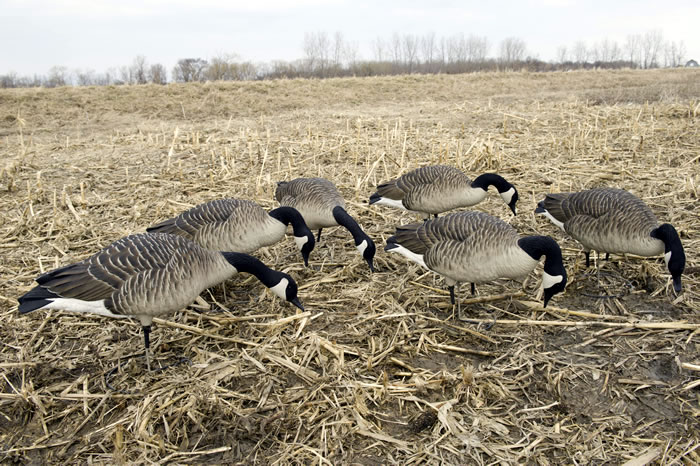 Tight spreads made up predominantly of feeding style decoys indicate a hot feed to passing geese, closely matching early season conditions when the fields are still full of food.

Geese aren't the only game in town during the early season. To consistently score on teal, realistic decoy set-ups are just as crucial. While teal come and go quickly, they do so across the entire continent, and often see multiple decoy spreads in a single day. For these reasons, teal become educated extremely quickly, adding to their already jittery behavior.

Adam Campbell of Louisville, Kentucky gets his fair share of blue-wings in the late summer period, but does so by going against the grain, and matching the birds. "I use Avian-X Early Season Teal decoys," he states. These blocks have an overall drab appearance to perfectly match September conditions. "I tend to stay away from full plumage drakes, as we get mainly blue-winged teal, and the males are not in plumage." 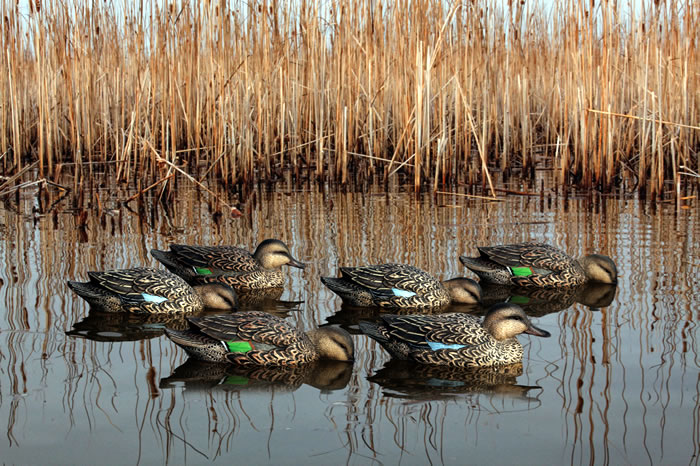 Teal often migrate before males reach full plumage. To more closely match the conditions, rely on drab decoys, or those made specifically for this scenario, like the Avian-X Early Season Teal pack.
Campbell's teal spread is meager in comparison to those of the honker hunters. "I only use six to 12 decoys and a single spinning wing decoy," he says. Teal are generally suckers for motion, and the spinner helps draw them in from long distances. In jurisdictions where spinners are illegal, a jerk string can often be magic to teal that otherwise buzz around without committing.

Decoy placement is important, especially as it relates to shooting angles for each hunter in the blind. To maximize your take on teal, have as many barrels on them as possible once they get in close.

Dee Draper has it down to a science. "I prefer to shoot finishing birds crossing, not facing," says Draper, who does so by utilizing clumps of decoys, spaced with numerous landing holes in between. He hunts from a crosswind set-up, so landing birds approach from left to right, or right to left, rather than directly towards Draper's hiding area. This focuses the birds on the decoys, rather than on the hunters. Do it right, and as the birds settle into the landing zones, each member of the hunting party is presented with an easy shot directly in front, maximizing the barrel-to-bird ratio.

Novice waterfowl hunters imagine skies filled with stupid birds during the early season. Veterans, however, know the truth: Oftentimes, the jig is up by day two.

To prolong opening-day success levels for weeks to come, take a lesson from the birds. Focus on what's most important to them. And remember, all eyes are on the decoys. 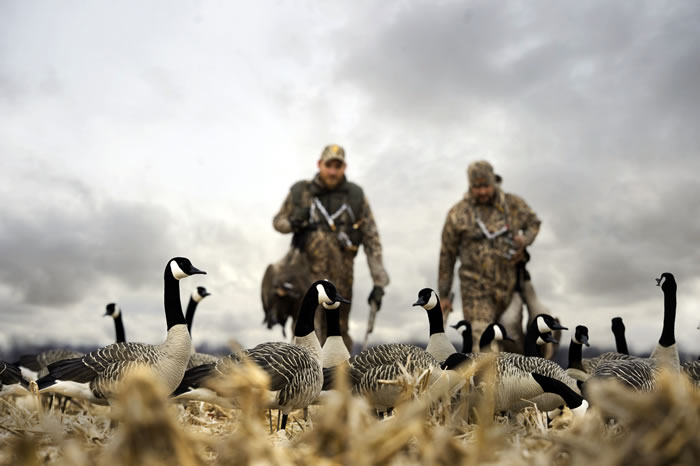 With liberal limits and plentiful birds, early season hunts can be memorable. Once hunting pressure takes hold, top waterfowlers stay ahead of the game by employing numerous decoy tricks.
Traditions Media
We specialize in creating and communicating the most compelling stories in the outdoor industry
TRENDING DISCUSSIONS
Advertise here
Advertise here
Please take a moment to visit our sponsors. Without them we would not be here.