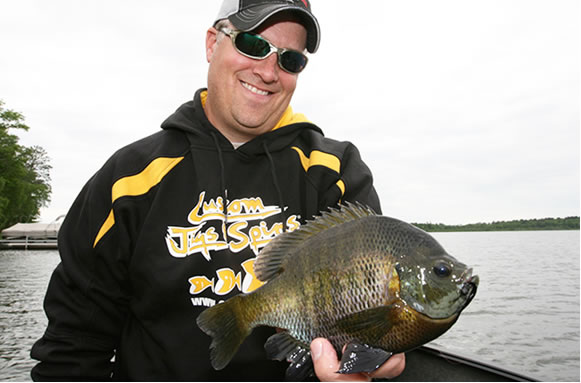 While many anglers fish shallow, trophy bluegills often linger deeper during late summer and fall. Photo courtesy of Custom Jigs & Spins
After a full summer of chasing 'glamour fish'-the bass, walleyes, and trout of the world-a dude dubbed Mr. Bluegill is certainly ready to call an audible. Not that Captain Troy Peterson doesn't constantly keep tabs on resident schools of sunfish, crappies, perch and white bass. With a moniker like his, it's sort of standard operating procedure. But if you ask the Eastern Wisconsin-based angler about overlooked seasons for hunting down heavy-duty panfish, "right now" might be the appropriate answer.

As it turns out, the reasons for Mr. Bluegill's post summer panfish proclivities boil down to accessibility, fish activity and, well, fun. Beginning in late August and often lasting all through autumn, patterns for panfish become more or less predictable. It's a great time to find fish on electronics because they show up clearly on Peterson's Humminbird screen, as bluegills and crappies position away from heavy cover. Once he locks onto a school, Mr. Bluegill and his clients frequently enjoy fast action, dropping a selection of carefully chosen presentations into the fish's deeper summer and fall hideouts. Almost regardless of where you live, the prescriptions to follow are sure to put you on a potent panfish bite. 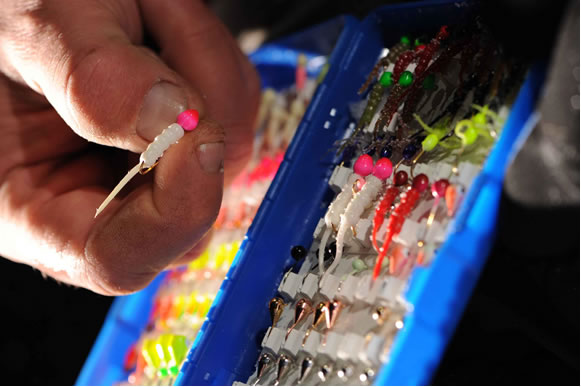 While primarily employed by bass anglers, the truth about the dropshot rig is that it can be every bit as effective for other species. Particularly as panfish folks draw on expanding selections of pint-sized softbaits-many of the best ones designated as "ice fishing baits"-dropshotting for other species has evolved into a spectacular system.

"I do a lot of dropshot fishing for other species," says Peterson. "The rig can be deadly all year, but even more so as we move into late summer and fall, when vegetation folds over and withers. The beauty of the rig is that you can determine the height of the weedgrowth, and run your bait literally right above the tops of the cover, without hanging up. Fish often position right there, so your bait jiggles directly in front of their eyeballs." 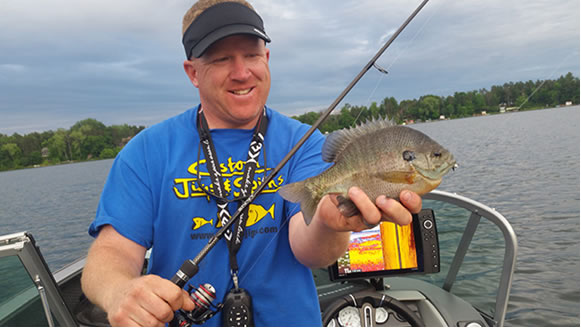 Captain Troy Peterson- a.k.a. "Mr. Bluegill"-says the late summer to fall phase offers fantastic deepwater panfishing.
Peterson primarily employs a 3/8-ounce dropshot sinker or weedless bullet weight at the rig's base, typically tying a #8 or #6 octopus or dropshot hook 12 to 18 inches above the sinker. He's a huge fan of a 'chunk of nightcrawler,' which remains the star for hooking boatloads of all species. But he nearly always begins by dressing the hook with one or two Nuclear Ant Legs-a spiderlike soft plastic accoutrement from Custom Jigs & Spins that delivers exceptional action to any panfish presentation.

"The Nuclear Ant is like a skirt on a bass jig or spinnerbait," offers Mr. Bluegill. "It's almost impossible to keep the little legs from quaking and kicking around." So while he dresses the hook with a Nuclear Ant collar, it also leaves room to impale half a crawler or a micro softbait, such as a Finesse Plastic or Wedgee, which seals the deal.

"The dropshot is so deadly for panfish because you can drop it to any depth quickly, maintain direct contact and yet, the fish feels no resistance when they bite. In fact, you want to set the hook quick, because fish may quickly inhale the whole works. We catch everything with it-sunfish, crappies, perch, plus walleyes and bass. It's a sweet trick."

Compact, heavy and super realistic, swimming lures like the RPM are overlooked options for big panfish of all species. Photo courtesy of Custom Jigs & Spins

Another of Peterson's favorite late season pastimes involves white bass-a panfish species that's always eager to bite. "I like to fish underneath bridges and embankments in rivers. Or in lakes like Winnebago, we look for flocks of seagulls, which betray bait and pods of whities below."

One of the best new methods for quickly boating a ton of bass, he says, involves a bait called the RPM, or Rotating Power Minnow. A 2-inch, ¼-ounce minnow-profile swimbait, the RPM casts a mile and darts and glides randomly on the retrieve. Peterson claims that white bass and pretty much anything else in the area eat it with abandon. "Cast it as far as you want and just start doing an aggressive pop and stop retrieve. You can let it quickly sink to the bottom and work it like a jig, or swim it through open water for suspended white bass or crappies. Perch love this thing, too." 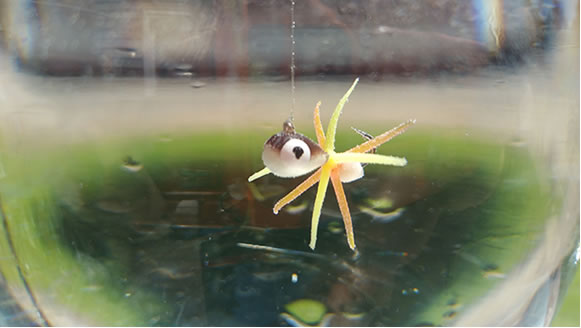 Further customizing of a Custom Jigs & Spins lure looks like this tungsten Chekai collared with a pair of Nuclear Ant Legs.

Borrowing from another of his ice fishing tricks, Peterson extols the advantages of tiny yet top-heavy tungsten, a progressive jig material that's perfect for deepwater perch, or for slowly drifting over 20- to 30-foot lake basins for other species.

"When dying vegetation shifts schools of fish into deeper, soft-bottom basins," he says, "little tungsten jigs tipped with a piece of crawler can't be beat. I'm a big fan of a purple and black Chekai Tungsten ice jig. If the water's super clear, white shines. On darker Lake Winnebago, orange is awesome."

Similar to his dropshot rigs, Peterson adorns each jig collar with a pair of Nuclear Ant Legs for extra action, followed by a chunk of worm or a micro softbait. "When fish are in the basin, my Humminbird side-imaging unit is the best way to find and stay on small pods of bluegills, perch or crappies. Once we're on 'em, we'll drop several jigs to the right level, give 'em a twitch or two and then just deadstick them as we slowly drift along. The jigs' extra weight ensures we stay vertical and in constant contact with the slightest bites."

A final method for slightly shallower panfish still hovering around weedlines or other dropoffs, Mr. Bluegill's favorite is to cast a 1/32-ounce Rat Finkee Jig with a waxworm or 'crawler. For fish suspending just off the edge, he simply drifts the bait behind the boat, intercepting active fish out in "space."

During midday hours, he's also a fan of doing the same thing with a 1/16-ounce Pro Series Slender Spoon, tipping its #12 hook with bait or soft plastics. Peterson calls it a 'flasher' "It's a super attractor bait for inviting the attention of fish floating around in openwater. During the day, the sun reflects beautifully off the spoon's surface, calling fish from greater distances. You can cast and slowly retrieve the spoon, or just throw it out and drift, giving it little twitches to trigger bites."

One thing's for certain, although Peterson surely pines for bites from big bluegills, the species that comes to the net next is anyone's guess; which can be a bonus in itself. So long as it pulls back and produces grins, everyone wins.