Walleyes in a Snap

By Jason Mitchell - July 29, 2016
Trolling patterns that cover water and break down big locations with crankbaits often seem to dominate the walleye scene come mid summer. As fish pull out over deep contours or basins and in some cases suspend over open water, nothing beats a crankbait for eliminating water.

Part of what makes trolling crankbaits so effective as we move towards the heart of the summer is that a crankbait is the fastest presentation you have. With speeds that can range from two to over three miles per hour, you can simply cover more water. Once the water warms up beyond 70 degrees, you can often get away with faster trolling speeds that surpass two miles per hour and my recommendation is to troll as fast as the fish will let you get away with because catching fish is often simply just eliminating water (you eliminate more water when you can troll faster) and running a lure in front of as many fish as possible. 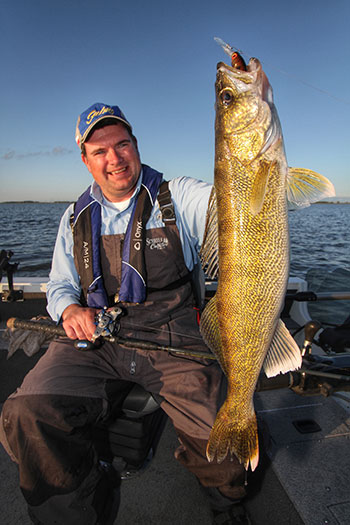 Over the past ten years, one hot trend on so many inland lakes and even some reservoirs has been running smaller hard vibration lures like Salmo Hornets behind lead core line. Over the past five years, we have also seen another trend gain some serious momentum and that is using big snap weights. In fact, using snap weights as large as four or five ounces that get out quickly and fish closer to the boat is actually starting to replace lead core which has been a staple for walleye anglers.

Now snap weights have been part of the walleye trolling routine for quite some time but many of the old snap weight methods mirrored the Great Lakes origins. That is clips with varying weights that ranged from Â½ ounce to four ounce sizes where anglers employed a 50/50 rule where the lead to either the crankbait or spinner harness was always the same (50 feet) and anglers changed the snap weight size to vary the running depths as anglers typically ran several lines out to the sides of the boat with inline planer boards.

With off shore trolling roots from Great Lakes fisheries, this snap weight trolling method has morphed into something completely different as you move west. Four to five ounce snap weights are often fished six to ten feet in front of the lure and these heavy weights can often be fished right below the boat. The set up time with this heavier system is so dramatically quick. There is no waiting. The speed of set up is one of the greatest advantages over traditional lead core.

Because of the tighter and closer proximity to the boat combined with this much quicker deployment time, we can often have an easier time of following tight outside and inside cuts as we follow a contour. The snap weight is never far from the transducer. While snap weights will lift and fall as boat speed changes, the lift and fall of such a heavy snap weight is not as dramatic as what you would find on smaller snap weights or lead core. Big waves or outside and inside curves will cause the lure and snap weight to surge and stall but speed will do little to adjust to changes in running depth.

Because of these characteristics, these heavier snap weight systems shine whenever you need to follow a specific depth range that is beyond twenty feet of water where the boat has to follow the contour. Because of the speed of deployment, anglers can often fish tighter areas than where you would typically dare to use lead core. 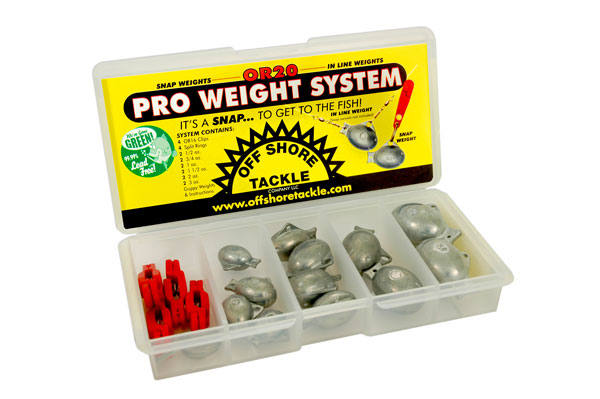 Sometimes referred to as a "poor man's down rigger," you can effectively use snap weights to efficiently fish down to sixty feet of water pretty easily. You are essentially putting cranks right behind and below the boat and can deploy extremely quickly. Another advantage to using snap weights is the simple efficiency where you are fishing closer to the boat and donâ€™t have as much line to reel up when catching a fish. If you can reel a fish up on fifty feet of line, you will lose fewer fish than if you have to reel up a fish on a hundred feet of line.

Typically, extremely clear water like you find on the Great Lakes fisheries or bodies of water with zebra mussels require much longer leaders between the lure and the snap weight but most inland waters will suffice with a lead that is the length of the rod. Seven to ten feet of line will work and the shorter lead between weight and lure sure makes netting fish easier without having to remove the snap weight.

Most anglers will use a ten or fourteen pound braid for the main line for the added sensitivity. Even with the snap weight, you can still usually tell if the lure is fouled or out of tune. Line counter reels are necessary paired up with a trolling rod like the Jason Mitchell Pro Walleye Series Great Lakes 8'6" Trolling Rod (JM861GLMH) which is a great all purpose trolling rod for running boards, snap weights and lead core with a retail price of less than sixty bucks.

Of course with your trolling spread, you can mix up some snap weights with lead core, wire, Dipsy Divers or flat lines. Most inline planer boards will handle up to three ounces of lead depending on the amount of line, speed and height of the waves. In my opinion, snap weights really begin to shine in July and August when the water warms up as the pendulum action you get with changes in speed often seems to trigger fish. Often noticed that lead core would often shine on the "off" days where as snap weights would kick in when the fish are on.

In states where multiple rods can be used, anglers often run smaller shad profiled baits off snap weights while long lining deep divers further out the back of the boat to stagger the lures. One of the most impressive deep diving crankbaits on the scene right now for long lining in deep water is the Salmo Free Diver. This particular lure will reach about forty feet of water without adding weight and has a loud rattle. Because of the exceptional dive curve of this particular lure, the Free Diver is a nice compliment to snap weights to sneak an extra line or two behind the boat.

This summer, make sure to incorporate snap weights into your walleye-trolling arsenal. Snap weights have a way of simplifying trolling in that you drop a heavy weight behind the boat and reel up the lure off the bottom. A simple and effective way to get your favorite lures into the zone in front of fish.