By Dennis Radloff - February 1, 2002
Life is full of firsts. First kiss, first date, first dance, first touchdown, first ticket, first boat, first fish, first musky, and first 10-pound walleye! Over the holiday break this season, I found myself paging through some pictures and re-living some of the days on the water from this past year. While every day on the water is always special in it's own way, some of the best moments are being part of my client's "first's".

I remember one August morning in particular as I was dunking the boat into Sister Bay, putting my rain gear on with enthusiasm, and asking a young man named Dave, "So what's the biggest walleye you have ever caught?" I can't even 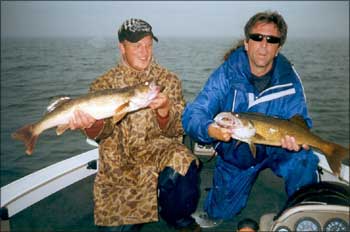 begin to describe the warm feeling that began to build inside as Dave stretched his thumb and index finger apart to the sum of about four inches and said "maybe this big?" We motored out about six miles through a solid downpour, and fortunately for Dave and his friend they had great rain gear, unfortunately for me, my good rain gear was still in another client's possession from earlier in the week. By the time we got to our spot, and had our lines running, the rain had at least stopped and I was able to begin to "drip dry". What happened next could only have been scripted by God almighty himself.

We were running crawler harnesses on planner boards on the edge of some reefs, and Dave had asked, "How do you know if you have a fish on?" I began explaining how to read the boards, and how the boards will trail or react depending on what kind of fish, and how big it is. Just as I was explaining, "and if we get a huge walleye on, the board will disappear under the water"…"LIKE THAT!!!" Dave shouted. Sure enough, the rod in the holder was bent over heel to toe, drag screaming, and the board was nowhere in sight. Dave grabbed the rod and began the fight of a lifetime at which time he looked at me and asked, "how big do you think it is?" Stretching my thumb and index finger out to about four inches I smiled and said "It's going to be a little bigger that this." About 10 minutes later we were landing Dave's "first" walleye, which measured in at an impressive 27 ½ ". The day went on and we caught a few more walleyes, which were ranging 26" - 28"…then right at the end of the day, Dave would experience yet another "first" in his new found walleye addiction. Another solid strike; this time peeling line out as though we were snagged on a jet ski ripping away at 80 mph. I have to admit, I really wanted to grab that one myself, I knew it was a dandy. This fish made three runs before we even got a look at her, and finally Dave got her within 10 feet of the boat and she was EASILY a 10-pounder who on her fourth and final run managed to deliver Dave's "first" broken heart. Somehow though, she got off, and without missing a beat Dave slapped a high five so hard I thought I'd need a palm transplant. That day was one of the greatest days of "first's" I have ever witnessed.

As I reflect on some of the other "first's" on the water, they aren't' all necessarily fish. Here are a few of the others I've heard;

When I stop to think about it, there's always so much more going on out there than the "catching", most of the time the "fishing" is the gift, and when, or if, we catch something it's a bonus.

I hope you all had a safe and healthy New Year, and just think, only 92 more days until the "first" day of Musky season!!!!

Best to you all,