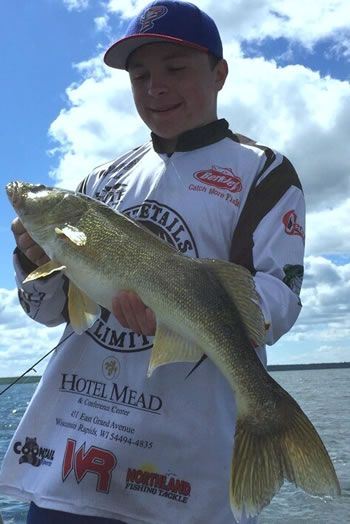 When most people think walleye fishing, they think like a traditionalist, which is early morning or late evening. It is true that the ole glass eyes are caught predominantly at this time of the day but they are also targeted during that time.

The typical scenario is to find yourself a shallow shelf off of deep water and wait for the walleye to follow the baitfish until they bite on your presentation as they work their way into shallower water supposedly where the light does not hurt their eyes.

That type of schedule does not work well for guides or tournament fishermen who spend their mid mornings and afternoons searching for walleyes. With their guidance we know that these fish will bite nearly under any condition of sky cover and temperature throughout the day.

Recently the boys and I were invited to fish with fishing legend Brian "Bro" Brosdahl. Brian is an innovator when it comes to producing fish for a variety of species. His target fish in the summer is indeed the walleyes and when he is not working the promotional circuit he can be found on a variety of Minnesota lakes catching this toothy critter.

Our target lake was Cass as we were staying at the Horseshoe Resort on the north end of the lake. Bro picked us up in his boat and we headed off mid-morning to catch some fish.

As it was still early June the bait of choice was minnows, as opposed to plastics, night crawlers or leeches. The walleyes were chasing the spot tail shiners and we were matching the hatch.

We were using a simple presentation of medium shiners behind a northland tackle RZ jig.

Fishing a lake like Cass mid-day often means the walleyes are a bit more concentrated and tougher to find. Once you find them however the action can be fast and furious until the school 'blows up' or spooks like Bro explains.

"With a lake like Cass, where the water clarity is so high the fish can see the boat or another fish from a long ways away. Many times they do not tolerate this and will either shut their mouths or the school will 'blow up' meaning they will leave the area."

Precision is the key during this time of the day.

Fishing mid-day can be just as easy as morning or evening but typically requires different tactics. On this outing there were two key ingredients that were extremely helpful in keeping us on the fish. 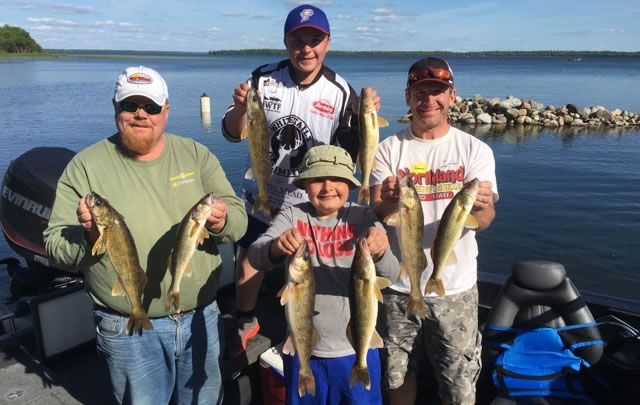 The first was having a fish locator that could not only pick up the counter but could pick up the fish. Bro is on the water enough that he could tell the difference between fish species. He pointed out to Austin and Cade what the baitfish looked like and the school of fish that we were targeting. He showed the boys the school of fish and that there were suckers mixed in with him.

He knew this from sending his camera down on such spots to tell him more about what he was searching for.

The second key ingredient was to be able to hold on to the location of the fish. The schools of fish we were targeting were holding tight to the bottom in anywhere from 14 to 30 feet of water. If we were off by a few feet you would be in the dead zone. This is where the precision of a trolling motor locked in with a GPS is the key.

Bro would get us near a spot, lock in with the trolling motor and the rest was hands free. Many times the back of the boat was in 20 feet of water while the front was in 30. He positioned the boys on the back deck and had them pitch out to the targeted location and slowly jig the bait back to the boat. Many times the strikes occurred right under the boat as they were reeling it in.

Some spots allowed us a fish or two. One spot in particular held its ground and we were able to pull several nice fish out of it. Cade was instantly on a fish with his first cast, and before anyone could even think about setting the hook he was into his second fish just like that. As Bro netted the 19 inch walleye, Austin set the hook and his pole doubled over. 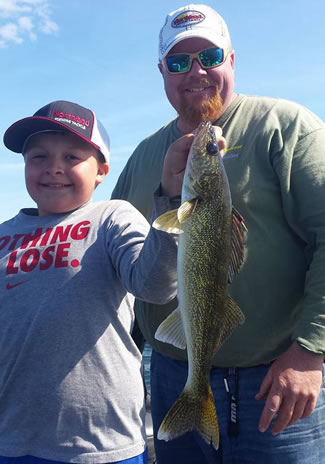 He was into something big and the fish roared drag out of the reel letting Austin know she was ready for battle. They went back and forth for a few minutes as Austin maneuvered around the boat. No one needed to reposition or worry where our spot was. Cade casted out and hooked up again as Austin was battling the beast. As it got closer you could tell it was big. Bro dipped the net in and hoisted out a beauty of a fish pushing all of 29 inches. It was close to noon and the big fish were biting.

If you know where to fish and have the ability to target them you can catch a lot of fish. We took a few pictures, netted Cade's 17 inch walleye and put it in the live well. Austin grabbed the tail of his fish and placed her back in the lake, to fight another day.

We worked the spot for a few more fish before the bite dried up and moved on targeting and looking for other spots similar to where we were. Cass has a lot of structure so we had a lot of options, some produced and some did not. In one spot that looked promising with a lot of fish on the sonar I set the hook on a big fish, unfortunately Cade had crossed my line and changed the angle of the hookset and the fish got off. The fish must have immediately went back to the school and told it's friends not to bite because that was it. We spent another twenty minutes and moved on.

By early afternoon we had caught and released more fish than what we needed. We kept a few for the pan and headed back to Horseshoe Resort.

Remember walleyes can be targeted anytime during any weather conditions during the day, you just need to change your tactics and locations to put the toothy critters top side.

Scott Stankowski
Scott Stankowski is the senior outdoor writer for centralwisconsinsports.net and produces weekly articles, typically highlighting getting kids active in the outdoors. His family prides itself on living off of the land. Scott also takes the mantra into the classroom where he teaches environmental science at Wisconsin Rapids Lincoln High School. Scott and his sons have won numerous titles in turkey and deer calling at the state level. Scott and his sons have a national outdoor television show titled Growin' Up Wild and can be found on Facebook.
BITS & BITES
Advertise here