By Bob Jensen - June 18, 2016
Crankbaits are hard-bodied baits that often resemble a baitfish of some sort. They come in all shapes, colors, sizes, running depths, actions, some rattle, some don't. The one thing that crankbaits have in common is that they catch a variety of fish year 'round, but they are particularly effective in the summer. They're great spring and fall baits also, but boy do fish in the summer like to eat crankbaits.

We can cast or troll crankbaits. When the fish are holding in small areas, say on a pile of shallow rocks, casting is the way to go. Your bait is in the fish zone most of the time, and when the fish are shallow, casting prevents us from spooking them. 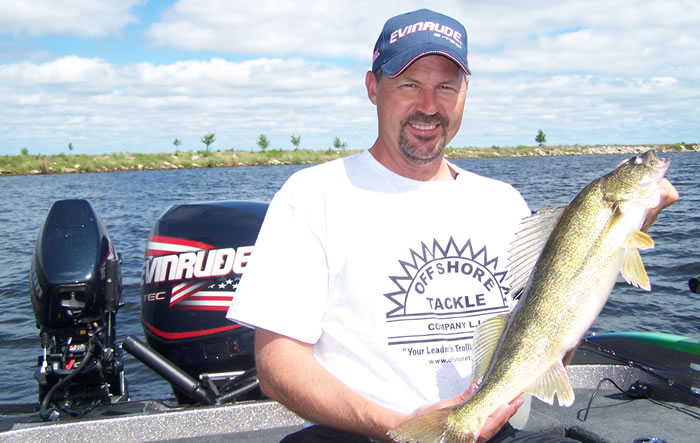 Dean Arnoldussen got this big walleye and many more like it to eat his crankbait in the dead of summer.
When the fish are spread out, trolling is the deal. Find a deep weedline and set up a trolling pass so your baits run close to the weed edge and deeper. The inside line will catch a weed every now and then, but all the lines will catch fish. In many lakes across the Midwest you'll catch walleyes, largemouth bass and smallmouth if they're present, northern pike, maybe even crappies or a musky. Simply put, every predator fish that swims will eat a crankbait.

A good way to cover water and catch even more fish is through the use of planer boards. Last year in the dead of summer, some of our most memorable walleye and crappie trips were the result of using boards.

It was late July, we were on a lake with very clear water, and our sonar in indicated that the walleyes were about ten feet below the surface feeding on baitfish or hatching insects. Minnesota is a one-line state, there were three of us in the boat so we had three lines behind the boat: One had a planer board attached, the other two were flatlines trolled directly behind the boat. After we had taken three quick fish on the board rod and none on the flatlines, we put boards on all the rods and really started catching.

A couple of weeks later we were on a different lake chasing crappies. The same scenario presented itself. As the afternoon got later, the crappies moved closer to the surface. Trolling directly over them spooked them. We put on Off Shore Mini-Boards, got the baits out away from the boat, and really started catching crappies and a few largemouth bass. Again, it was the employment of boards that helped us catch more fish. Many anglers who use boards agree that the ones produced by Off Shore are the best.

I have several tackleboxes that are home to crankbaits and they all get a workout, but in the past couple years I've been reaching mostly for the box that contains my selection of Salmo Hornets. The #5 Hornet is what sees the most action for walleyes, and last year the new 6.5 Hornet took a lot of largemouth. On the crappie trip mentioned earlier, the #3 size was the best.

The number of crankbait colors is endless almost. When starting the day, everyone should tie on a different color until the fish show you what they want. A good rule-of-thumb is natural and subdued colors for clear water, flashier, brighter colors for stained water. That's a good starting point, but give the fish what they want.

Another good rule-of-thumb: Use a landing net and have a needle-nose in the boat to safely and quickly land and unhook all the fish you'll be catching.

Crankbaits catch fish. Find out for yourself next time you're on the water.