KVD’s Comeback: In His Own Words

Bass fishing is a lot like any sport. Fall into a slump and critics crawl out of the woodwork. And with today's multitude of media, there are way too many opinions flying around - most of all the realm of social media, where everyone's an expert.

But squawk boxes are it's a little quieter this week for Kevin VanDam as bass fishing's icon commanded a wire-to-wire win at the A.R.E. Truck Caps Bassmaster Elite on Louisiana's Toledo Bend, ending a five-year drought between major wins. 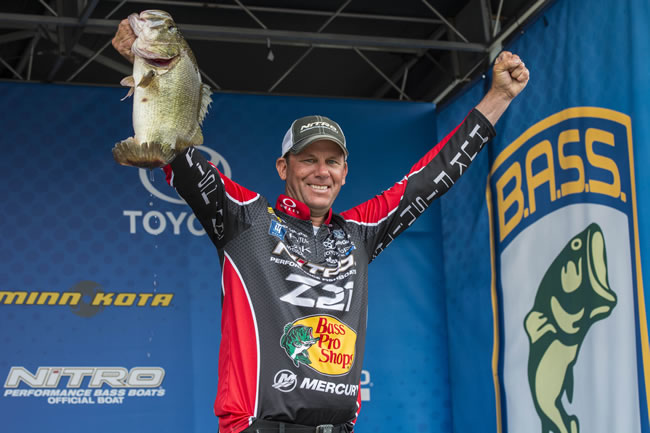 For Kevin, this win was personal. It was a long and torturous road filled with late nights, early mornings, miles of travel, and weeks of being away from home. But there was one thing that didn't change, his iron-forged perseverance.

We sat down and talked with Kevin about how it all happened and how it feels to be back on top. Here's a peek inside the boat and the mind of someone who could be angling's greatest of all-time.

How did you feel going into the event?

KVD: I didn't know what to expect going into the first day. Practice was really windy, which made it hard to fish offshore, but I got a few bites, so I knew I'd get to fish how I like. I spent a lot of time studying the new Toledo Bend LakeMaster map on my HELIX 10 and just graphing with Side Imaging, Down Imaging and 2D Sonar.

What kind of offshore structure was key?

KVD: Bass were in transition from post-spawn to summer structure, which on Toledo means deeper ledges, humps and spots close to creek channels or the main river channel itself. The water was also really high, so they were pulling some water and the current through the lake moved these bass to outside points. So I tried to find areas like these outside large spawning flats that would hold a large concentration of fish.

What role did mapping play?

KVD: It played a big role. I know the Humminbird LakeMaster guys surveyed Toledo Bend when the water was low and basically destroyed two boats and a bunch of props to get the very best detail possible. That says a lot. So I knew every Humminbird pro was going to have an advantage over the competition. The Toledo Bend map on the new LakeMaster Mid-South States card version 3 is almost overwhelming because there's so much detail. I fished around Housen in Six Mile, two major creeks in the lower end of the lake, and it was stunning what that map revealed. But it's the same thing with LakeMaster HD maps everywhere I go, from Kentucky Lake to Guntersville. Sam Rayburn, too. There are no more secrets. For me, it's actually kind of bittersweet, because now everybody can see the same things that I used to have to work so hard to find. But it's going to help a lot of anglers become better fishermen. 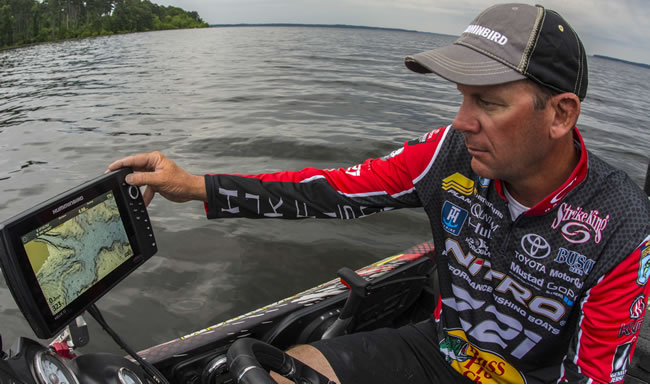 If you don't have LakeMaster you're at a huge disadvantage.

How deep were the bass?

KVD: I had some spots where fish were as shallow as 15' or as deep as 30'. One of the biggest fish I caught was on a 28' hump. So, the big thing for me was zooming in and out when I got to these areas. On a 500-foot scale mapping with LakeMaster, you get a great view of everything that's in the region - how the spot you're looking at lays out and what's surrounding it and how fish might funnel to it. But it's also critical to zoom into the 50-foot scale so you can get the precise line and cast off the ends of these points, especially after I graphed them. Once I had that plot trail I'd use it as a line to make my cast.

Besides mapping, what technologies helped you dial in fish?

KVD: Because there was so much timber and structure, I used a lot of 2D SONAR and Down Imaging in split-screen view. Being able to see both images side-by-side allowed me to discern the different types of fish, was the key. There are so many baitfish, white bass, and yellow bass in Toledo Bend that a critical part is being able to tell what's what on your electronics.

When they weren't pulling water, the bass were setting up on or just outside points and ledges and hanging close to the bottom. The white bass were a lot higher up and farther off the drops. The largemouths would be one or two feet off the bottom and I could actually see them on my Humminbird, turn around, make a cast and catch 'em. And that's what I found in practice and was able to expand on during the tournament.

Tell us about your winning crankbait program. 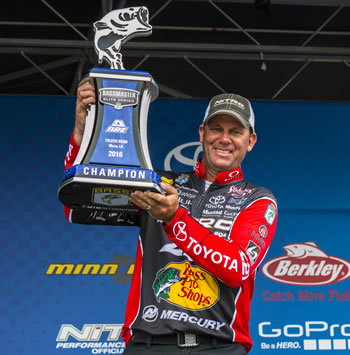 KVD: I like to fish crankbaits during post-spawn because I can be very efficient-not only can I cover a lot of water, I can tell the difference between hard and soft bottom. If I'm in 15' to 20', I'm going to throw a Strike King 6XD; if I'm in that 19' to 24', I like the 8XD; if I'm anywhere from 20' to 30' zone, the 10XD is the way to go, especially if you're trying to target big fish on Toledo. The whole family of baits allows me to cover the 15' to 30' zone really well.

I have a cranking system that I worked with Quantum to develop that includes 7' 10" or 7' 11" medium-heavy or heavy- action composite cranking rods and my signature 5.3:1 gear ratio reel for power. Depending on the crankbait, I use 12- to 17 lb. fluorocarbon.

KVD: I reeled my crankbait down over a hump that topped out at 28', and I got hung up in brush. As soon as I popped it free that fish bit it. I set the hook, loaded up, and I knew it was a big one. It immediately swam into a tree top, so I just kept pressure on it, eventually getting it to swim out of the tree. Once the fish was inside the boat I was so excited that I jerked the hook out of the fish and into my hand! I had the fish in one hand and had to cull a little pound and half fish and put that big one in the live well with a Strike King 10XD 2/O Mustad treble stuck in my hand. Fortunately, I had a camera guy pretty close and walked him through the procedure for the painless hook removal and it worked like a charm.

Following your win, how do you feel about the rest of the season?

KVD: I've had an up and down season to this point. I had a couple good events to start off and was in good shape, but I've had a couple really bad days, too, the last at Wheeler. To have a great event here at Toledo Bend, unarguably the best bass lake in the country, really makes it special. I could not have done it without my Humminbird units and LakeMaster mapping. It's a one-two punch with the Side Imaging, Down Imaging, and the LakeMaster map that is second to none. I'm proud to be with a company that understands the importance of investing in accurate mapping.

Traditions Media
We specialize in creating and communicating the most compelling stories in the outdoor industry
BITS & BITES
Advertise here
Advertise here
Please take a moment to visit our sponsors. Without them we would not be here.