By Bob Jensen - May 16, 2016
It's pretty much official: The open water fishing season for 2016 is here. Minnesota walleye season opened this past weekend, Wisconsin was the week before, and northwest Iowa was the week before that. Most of the other states in the Midwest don't have a closed walleye season, and while there are still a couple of seasons left to open, the walleye opener to many is the official signal that fishing season is in full swing. In the next few months we'll make lots of new fishing memories. Following are some ideas on how you can make new memories when it comes to fishing. 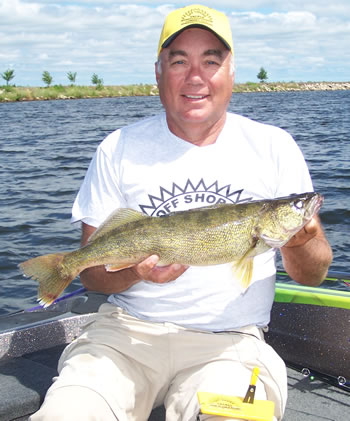 It's good to get on the water as much as we can. For many of us, exploring new waters is a big part of the adventure. This summer, try really hard to fish somewhere where you've never fished before. Maybe it will be that little river you drive across on the way to work every day. Some of those little rivers have very good fishing for smallmouth bass, and some of them don't have real good fishing but they're just a nice place to spend time in. It's good to spend time in nice places.

Just as it can be productive to explore new fishing spots, it can be very productive to try new techniques. This year, try really hard to experiment with a technique you haven't tried before, or one you've tried but haven't had much success with. It can be hard to do, but next time the walleyes are really whackin' your jig/minnow combination, or your spinner/crawler rig, try replacing the live bait with plastic. At times you might not do as well, but at other times you'll do better with the plastic. In the past few years, Impulse plastic has become a very important part of my fishing success. Plastic is available in lots of colors and shapes that live-bait isn't, and it's certainly much more durable. It won't always be better than live, but there are enough times that it is better that it's worth your efforts to make plastic part of your fishing arsenal.

Along those same lines, when you're really catchin'em on a crankbait, try a different color or a different size. There are times when color is a very important consideration, and there are times when it doesn't matter too much. Often though, experimenting with color and size will result in more or bigger fish. A good rule of thumb in the summer and fall is this: If the fish are hitting good on a particular size, try the next bigger size. If they continue to hit on the bigger size, go even bigger. By doing so, you'll usually be appealing to the larger fish.

Last thing: When you go fishing, it's good to have a plan. For example, on same lakes it works well in the summer to use live-bait rigs on deep structure for walleyes. If you're on one of those lakes, tie on a live-bait rig, put a crawler or leech on the hook, find some deep structure, watch the sonar for fish, and when you find the fish, drop a bait to them. If they don't bite, find a different school of fish. If they don't bite, look somewhere else. If you find more and they don't bite, abandon the plan, or at least change it. Throughout my fishing career, there have been so many times where experience suggested that we should be doing one thing, but in reality something else was better. I can't count how many times we put so many more walleyes in the boat by pulling spinner rigs quickly behind Off-Shore planer boards even though it was a time of year when conventional wisdom suggested live-bait rigs would be better. Sometimes conventional wisdom isn't so helpful.

Have a wonderful and safe fishing season.