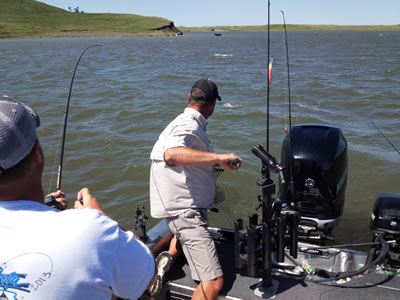 Holding the distinction of the most well-known of the 6 mainstem reservoirs on the upper Missouri River; Lake Oahe is the gem of them all when it comes to opportunities for anglers. This huge Missouri River reservoir originates from the Oahe Dam near South Dakota's state capital of Pierre and continues well into North Dakota, running approximately 231 miles, covering 2,250 miles of shoreline and spanning 370,000 acres with a maximum depth of 205 feet. It is the fourth-largest reservoir in the United States, with 51 recreation areas providing excellent facilities and access for roughly 1.5 million visitors each year. Most of the visitors come for the fine fishing.

There is a good reason for drawing in so many fisherman from all over the country to this sparsely populated area. Namely, the great walleye fishing. There are tons of opportunities for other fish such as northern pike, catfish, white bass, chinook salmon, and even crappies among the more well-known. But, when we are talking about what folks chase the most when on Oahe, walleyes definitely get the greatest amount of attention. The term walleye factory gets tossed around an awful lot-far too much in my opinion. Oahe is one body of water that can honestly lay claim to and deserves such a lofty title.

As Oahe is a reservoir and the walleye's that were impounded right along with the water are of a riverine variety; they express a decidedly aggressive nature when it comes to feeding time. What this translates into is some of the most torrid bites you will experience anywhere. The real beauty of this is that they will respond to just about any tactic that you can think of. Bottom bouncers and spinners or variations thereof were perfected here and have accounted for untold numbers of fish and remain a staple presentation option. Finesse livebait techniques excel just about any time. This is also a crankbaiters paradise as they will work anywhere in the water column from depths of 100 foot plus that can be reached via downriggers, snap-weights, or planning devices right on up into a foot or two of water with boards pulled along shoreline. You can get just as sophisticated or as back to basics as you like. It can also be as simple as a jig and about anything you would want to adorn it with. Livebait is great, but darn sure not needed as plastics often work just as well. If you find the fish on any one of thousands of points and present your lure or bait properly, they will respond favorably to most anything you are comfortable showing them.

Another interesting note about this reservoir and the fish that inhabit is that no matter what we as Man or Mother Nature can throw at it in the way adversity-the reservoir always seem to miraculously right itself. Drought and subsequent low water levels are a cyclical and common occurrence. Often leaving the eggs of walleye and important prey species such as rainbow smelt high and dry. This is compounded by the arguably (you won't get much argument around here) inept actions of the Corp of Engineers managing water levels catered more to the questionable economic benefit of downstream interests over ours.

Head on out to Lake Oahe and get in on the action this season.

On the opposite end of the spectrum and another prime example of questionable foresight was the 2011 debacle where the Corps was forced to open the emergency spillway for the first time since the dam was constructed due to being caught off-guard and not ready for a spring influx of runoff. The result was to flush most all of our smelt and a significant number of gamefish alike right on downstream. This did have an immediate effect, but the lake always seems to find a way to balance itself. The opportunistic nature of the walleyes quickly transitioned from the lack of deeper cold water baitfish to the plethora of options of warmer water and thus much shallower prey such as the young of the year of most everything that swims. Observant anglers have followed these fish right into the very back of major river arms and large bays alike to tap a previously only lightly touched and now growingly acknowledged pattern.

In my opinion, this has taken the pressure off the smelt and is permitting them to rebound and allow a newcomer and increasingly viable food source in the form of lake herring to begin to take hold. There is some evidence of this in test nettings as well as anecdotal evidence in fishing results. More fish are being caught in deeper haunts as of late and you can often see them coughing up these prey in the livewell. This bodes well as we are now experiencing some much needed equilibrium. This serves to spread the fish, the anglers, and subsequent fishing pressure out over a much wider area. Now we are beginning to once again see the large loose schools that are not only actively feeding, but feeding competitively. This just serves to intensify the bite and we as anglers are reaping the benefits.

While on the subject of competition, Oahe has also served as a spawning ground for and has led the way in the proliferation and popularity of modern day walleye fishing tournaments. This can now be evidenced by the number of tournaments ranging from small local versions right on up to the highest level professional events being held each summer. There are a number that have been around for some time and the folks that run them have the venues down pat and this makes for an enjoyable way to participate in some good natured competition and even better camaraderie. If you want to test your angling skills, learn some valuable lessons along the way, and pick up some great tips-there is simply no better way to do so than to partake in a few.

This year we will see 5 of the most established and well-known tournaments being held just as they traditionally are, but with the added bonus of being part of a new tournament circuit to be known as The Northern Oahe Walleye Series. The participating tournaments in chronological order are: The Wolves on the Water (Walth Bay-May 14th-www.nsuwolves.com/support), The Denny Palmer Memorial (Mobridge-June, 11-mobridgeoutdoors.com), The Pollock Men's Club (Pollock, SD-June 18 and 19-pollocksd.com), The Whitlock Bay Tournament ( West Whitlock-July 9 and 10-americanlegion-gettysburg.com), and the SD Walleye Classic (Swan Creek-July 22 and 23-sdwalleyeclassic.com), The Northern Oahe Walleye Series Championship Tournament will top off it all off (Mobridge-August 19 and 20). This leaves the entire reservoir literally wide open in that cumulatively the boundaries of these tournaments run the entire length of Lake Oahe in South Dakota from the Dam north of Pierre right on up to the state line north of Pollock. 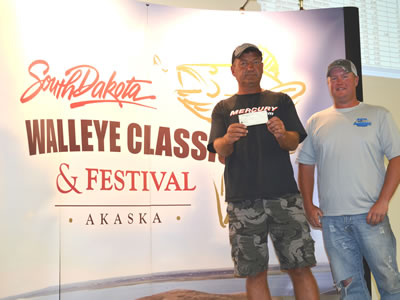 In a nutshell what this means is that you can fish one or all of the tournaments with no obligation whatsoever to participate in the series itself. You will receive points based upon your finish and if you choose to fish at least 3 of them, these points will apply for a team of the year title. If you were to fish 4 or 5 tournaments, you can use your top 3 finishes for this honor. Therefore, it does make sense to fish as many as your schedule will allow. This will all be concluded and climaxed with a Championship event to be held in Mobridge, SD on August 19th and 20 with well over $25,000 in cash and prizes awarded to a full field of 100 teams. Final team of the year points will be awarded to each participating team with 3 qualifiers fished and will weigh heavily in determining team of the year honors. Any team finishing in the top 20 of a Qualifier will automatically qualify to fish the championship. Any team that has fished at least one qualifier will be eligible to fish the in the Championship if there are openings available after those with the highest points totals and those with at least 3 qualifiers fished to be considered first. There are guaranteed cash prizes for the team that wins the championship event as well as team of the year. There will also be significant sponsor product awards with Raymarine providing a Dragonfly 7 Pro with Navionics+ Chart and a eS78 with Transducer and Navionicss+ Charts for the Winner of the Championship and Team of the Year respectively. Sodak Sport and Bait will be providing gift certificates at each and every tournament. Warrior Boats and Aberdeen Sport and Rec will be awarding certificates to be used towards boat purchase and or service work. JB Lures and ReefRunner lures are onboard with generous product support. Moritz Marine will be participating as well. We are garnering continued interest in the inaugural year of this Circuit and will provide updates as needed. For all information and entry forms, please go to www.northernoaheseries.com and check back often for new developments.

Bottom line is that this series a 100 percent go. And, unlike the unfortunate controversy that has surrounded other circuits, you can rest assured that it will be well run and purses guaranteed with each host site community conducting the qualifiers. The Mobridge Chamber of Commerce will take the lead in compiling points and naming and paying the Team of the Year and Championship winners. They will execute every aspect of the Championship with all of their experience and proven track record of assisting with major professional tournaments and managing notable events such as The Denny Palmer Memorial and the Mobridge Ice Fishing Tournament and Expo. I have personally worked with these folks for many years and can attest to their dedication, professionalism, and most importantly…results.

This all makes for a compelling argument and a positive enticement to spend some of your recreational time this season on one of the very best walleye waters in America. And, you can do so while enjoying fine hospitality and getting to know the folks who will happily welcome you to this fine fishery.