March On The Ice

By Bob Jensen - February 22, 2016
It seems like February just started and I'm already looking forward to ice-fishing in March. March is my favorite month for ice-fishing. The days are longer, the weather isn't as cold, and the fish like to get caught in March. Following are some things to keep in mind to catch more fish through the ice until the end of the ice season. 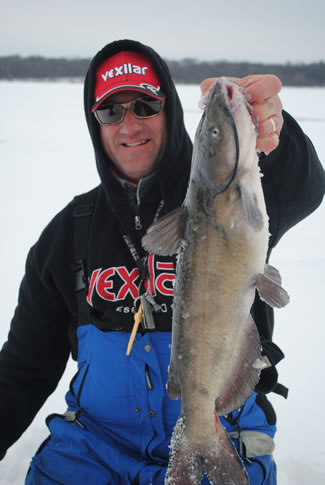 The start of the day and the end of the day are the prime times to be on the ice. There will be flurries throughout the day, and weather conditions can create good fishing at mid-day, but much of the time the first couple of hours and the last couple of hours of daylight will be the best. I was fishing with some friends in South Dakota in March a year or two ago and they very accurately predicted when the bite would intensify. The pattern for the last several days had been when the sun got just above the horizon at the end of the day, the perch turned on. It happened like clock-work. Take advantage of that end-of-the-day bite if you can.

Some other fishing patterns get sketchy this time of the year, just like they do at most times of the year. One of my very successful ice-fishing friends says that in March there are lots of bugs and worms and stuff hatching on the bottom of the lake, and that we should use baits that mimic those food sources. We do and we catch fish.

Another very successful ice-fishing friend confirms that bug- life and such is hatching on the lake bottom, and the fish see so much of that bug-life that they like something that looks different. When I fish with that friend, we use baits that look nothing like what the fish are eating, and we catch fish. It's important to remember that we need to show the fish what they want to eat, not what we want them to eat. For fishing success, whether it be under the ice or in open water, we need to keep experimenting with different presentations until we find what the fish want to eat on that day. Their preference will change by the day and by the hour.

With that said, much of the time in March we'll be after perch or crappies. And, much of the time we'll have something like a Mooska Tungsten Jig or a Tungsten Banana Bug tied to the line. Most of the time it will be tipped with an Impulse Bloodworm or Mini Smelt. The tungsten baits enable us to use smaller baits in deeper water, and the Impulse is so much more durable and versatile than live bait.

The month of March signals to most of us that the end of another ice-fishing season is in sight. It also signals some of the best ice-action of the year for many of us. Find out for yourself how good ice-fishing can be in March.