Aim For The O2

By Mitch Eagan - February 9, 2016
Imagine your home growing darker by the day, to the point you haven't seen sunlight in over a month. Moreover, your surroundings are growing colder by the day. In fact, it's so frigid that your muscles have become rigid; to the point it's all you can do to muster moving few feet…even to eat. And you're hungry.

Oxygen is diminishing, too. Some areas are completely void of oxygen, while other pockets have just enough to sustain life. Thus, you migrate to where respiration is still an option.

To say life's registering a zero on the fun-o-meter is an understatement.

And with that lowly scenario in place, you now know what it's like to be a fish living in the Ice Belt during the dead of winter. It's been a long time since light penetrated the surface and temperatures are at the coldest they will be all year. To boot, the lack of vegetation, rain and wave action have oxygen levels dwindling rapidly.

And it's this combination of factors that make midwinter a difficult time to catch fish. But if you're game to put in the time, find those oxygenated zones, rewards are paid in bites and fillets. 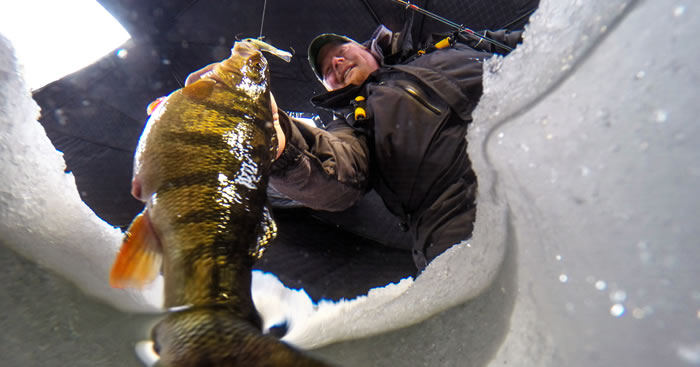 The safest place to avoid suffocation is sometimes right under the ice. In the bowels of winter, if oxygen levels are critical, crappies, bluegills and perch could be hanging right under your feet. Photo by Bill Lindner

"I drill a lot of holes and check every one for any signs of life," said Bro. "If fish are right under me I'll see 'em on the 'Bird, and, because of the ultra-sensitivity settings Humminbird provides, will able to get my jig in their face.

"But I'll also lower my Aqua-Vu Micro 5 Plus down every hole, as well; especially if I am not marking anything. Fish might be just inches under the ice during the heart of winter, following the oxygen. The camera is able to spy those fish."

Paying close attention to the underwater viewing system's screen the moment its camera hits the water, Bro starts spinning the camera rat the bottom of the hole. Oftentimes, panfish will be literally inches away, curiously inspecting the corded device. Once fish are revealed, Bro removes the camera, strips off a couple feet of line and lower his jig-tipped with either spikes, wax worms or mousies.

"A lot of anglers have no idea those fish are even there," Bro added. "And these suspended fish are the most overlooked this time of year. It's cool when you can see your jig and watch a fish swim over and gobble it up."

If there are a lot of fish just under the surface, Bro will operate out of his Frabill flip-over. The darkness not only allows him to see the fish better, but also camouflages the fact he's above by muting his silhouetted movements.

Custom Jigs & Spins' new Rotating Power Minnow (RPM) has been fully weaponized. In the dead of winter, the ballistic-bait is best aimed at active fish, especially ones in well oxygenated waters. Photo by Bill Lindner

Goin' with the flow

When Walleye Tournament Pro Mark Brumbaugh targets pike, walleye and jumbo perch late in the season, he searches out river and creek mouths.

"Anywhere water's flowing into a lake there will be more dissolved oxygen," the Brownstown, Ohio, resident says. "And because fish spawn in these same rivers, they'll be here staging to reproduce, too."

Because there's more dissolved oxygen near inlets, fish will be spread throughout the water column. Subsequently, Brumbaugh likes larger, heavier jigs as they'll fall faster to fish exposed on his sonar.

Bladebaits are one of Brumbaugh's go-to lures when the river water's stained as they produce a lot of vibration and are easy for fish to zone in on. Reef Runner's Cicada is one of his favorites. He also employs Custom Jigs & Spins' B3 Blade Bait and new Rotating Power Minnow swimming bait.

When fish are tucked tight to the ice, Bro employs Aqua-Vu optics and fishes in real-time with an AV Micro DT in a Micro-Mobile Pro-Vu Case. Photo by Bill Lindner

As avid anglers will tell you, late winter can be one of the toughest times of the year. But maybe that's only because they weren't looking in the right places.

Some fish might be right under foot; literally, mere inches under the ice. If this is the case, use light lures with a slow flutter and fall. In waterways with inlets, search out the entire water column with lures that sink fast so you can get the lure to fish before they turn tail.