A Case to stay in Place

By Dennis Foster - January 23, 2016
This overlooked strategy can pay big dividends as one of your best options for icing the biggest fish of the year.

Before the run and gun crowd starts sneering and guffawing, hit the kill button on your augers long enough so you can hear for a moment and open your mind to the possibilities. Scrambling all over the lake and covering a lot of territory-particularly for perch-is indeed the best route…much of the time.

That being said, I also relish a little down time-if you will-come evening in order to put some oversized mature walleye's on the topside of the ice. If you desire some pugnacious and portly pike, much of what I am about to relay holds equally true, just more of a late afternoon thing.

The most important component to this system is having done your homework well ahead of time in order to put yourself on high percentage spots. Proper location equals success and there is much more to fishing than the lures/baits used and how we present them. As always, fish must actually be present in order to catch said fish. Therefore, selecting proper structure is key. Keep in mind that every body of water has different structure and cover characteristics and each fishes in its own unique way due to this and variances in baitfish, etc. Study maps long before you even think about heading to a lake and do a little Intel work by picking the brains of experienced local anglers. Don't ask for their spots as once found, this is a hush-hush deal and they are closely guarded. You will get little more than a dirty look and total silence…at best! Just ask them what you should be looking for. Once you know the key elements, consult the map and begin the search for your own secret locales. 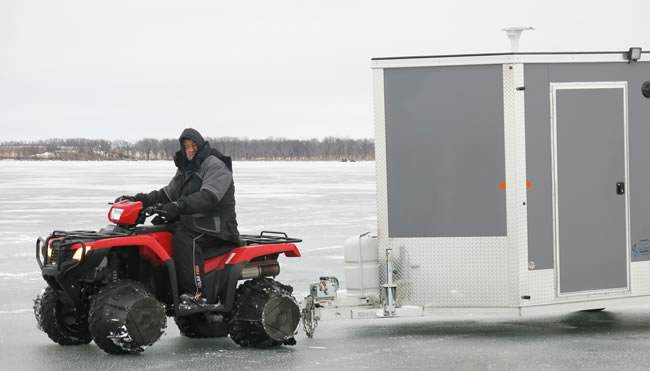 Please realize you are prospecting and that this is seldom a one shot deal; it may take several attempts to find your first good spot. And, even a good spot may take several evenings to generate its' first returns of gold. Seasonal timing is also an overlooked variable as some spots prove significantly better depending on if it is an early, mid, or late ice period. Believe me, it is well worth your best efforts, as once you have your own hard earned handful of productive areas, they will typically produce consistent results year after year. Use common sense, take a few pictures and release the big females. When your experience fishing this good, do not become greedy and test karma lest the fish gods quickly turn on you.

Some of the general things that I look for are deeper water in close proximity to known shallower feeding areas. Throw in some substrate transitions and or weeds and it gets even better. Keep in mind that deep water is relative. This might be as little as 10 to 20 feet in prairie lakes or it could be 50 plus feet in the case of deeper bodies of water. I know there are varying opinions on this, but I have seen it enough times to be comfortable stating that in many-if not most instances, particularly in the case of walleyes, that the majority of fish tend to lounge around just off any available structure in deeper water while not actively feeding. Once they do decide to feed, it is a short trip onto the structure and available cover to quickly quaff down some calories and then slide back out to digest the bounty and begin lounging again. This becomes quickly apparent as fish start tripping pop ups that span deep to shallow water each evening and then conversely once they slowly depart as the bite and activity levels fades.

Something interesting to note is that I also feel that most of these fish don't necessarily slide "up and down" the break as a lot of folks think. I am of the opinion that the many of the largest fish simply move out horizontally and suspend at roughly the same depth they show a preference for feeding at. So, if you have determined that the fish are feeding most actively in say 15 to 25 feet of water and you have a 50 foot basin nearby, it would be logical to assume that most of the fish are suspended 15 to 25 feet down over 50 feet of water directly adjacent to the break during non-feeding times. Keep this in mind and seek these fish out before prime time sets in as it often pays dividends in a few extra fish. 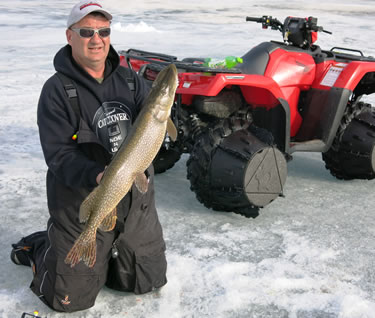 Now that we have our general location, it is time to get to work. In this scenario, there is no more valuable tool than a tip up. Or in my case, a pop up as I have relied on the candle style magnetic pop ups manufactured by HT Enterprises that use a vertical shaft to indicate bites. The beauty of these is that they are silky smooth and can be reliably set to use chubs a foot long all the way down to finessing crappies with tiny minnows. And, due to their unique design, you will never have any issues with wind causing false flags or drifting snow fouling things up.

If we are allowed multiple lines and know we are going to be working a general area for an extended period of time, I feel it is utterly foolish not to be putting them to good use. Here in South Dakota we are allowed 4 lines per person. Placing 3 pop ups out in strategic locations serves to not only catch more fish but also function as indicators of exactly where the fish that are up and eating. This all happens without effort while you are using your 4th line to actively jig other open holes and is without a doubt, the wise man's option.

If you start to see a trend where several bites are occurring in the same general area and or depth, by all means move more lines there and concentrate your jigging efforts as well. We only have limited windows of activity on hardwater and this system will take full advantage of these flurries of feeding.

In order to do this, bring along your 100 hole a day disbelieving buddies and turn them loose with an auger as we want to have open holes up and down the structure and in every nook and cranny. This allows us to quickly and quietly move set lines and have ample jigging areas as well. A downright deadly tip is to have an extra hole about 6 feet from each and every pop up. Walleye's are notorious for playing a cat and mouse game with the large chubs that are key to this system. It is not uncommon for them to set off your pop up and take your chub for a foot or two ride and then inexplicably drop it. Once reset, you often don't make it more than a step away before they slip back in and do it again…and again.

A quick solution to fix these frustrating fish is to simply drop a time tested fluttering lure type lure such as a JB Lures Gem N Eye with a tail hooked minnow down the adjacent hole. The fish is obviously still in the vicinity and you can watch the fish zoom in on your Vexilar and slurp the tantalizing package down as it slowly and seductively descends with the minnow resisting all the way. This little trick proves too much to resist and is often inhaled on the first drop before it ever reaches bottom.

The reverse is often the case as well. It is a good idea when the action slows to aggressively sweep up several feet and then shake in place an aggressive vibrating and flashy blade bait like a ReefRunner Cicada near your pop ups to pull fish in. You will quickly catch the hot fish and the more mellow types will tend to mosey over to investigate the commotion and fall victim to your chub. A couple of ultimate one-two punches that will help put the odds squarely in your favor.

A typical scenario finds me starting the day perched on my Honda Rubicon with TraxLok and outfitted with J-Wheelz and studs to aid in traction and steering control while toting a wheeled house across the open basin in search of perch and free roaming walleyes. Once found, I can quickly drop the house while still attached to the ATV and fish in ultimate comfort. But, I can assure you that once I can see my shadow growing long that I will be headed for structure, putting the house on the most prominent of it as a luxurious base station and deploying the tactics outlined above.

Give this system some serious consideration this year as quite frankly, more often than not, I have seen the tip ups account for the vast majority of the fish on any given outing and in my experience 95% of the truly big fish. Yes, there is an advantage in numbers of lines set, but we must also realize that frequently and particularly in the case of big fish, that they are highly selective and simply prefer to lazily slurp down a large livebait rather than what they perceive as "chasing" an aggressively worked lure. Don't make the mistake of scoffing at these seemingly over simplified and outdated tactics. There is indeed something to be said about being retro cool and old school.

Dennis Foster
Dennis Foster is a Hunting/Fishing Guide and Outdoor Writer from Mellette, SD. If you would like to book a trip or have questions or comments, he can be reached through his websites www.dakotapheasantguide.com and www.eyetimepromotions.com.
TRENDING DISCUSSIONS
Advertise here
Advertise here
Please take a moment to visit our sponsors. Without them we would not be here.