By Maynard Lee - January 19, 2016
The frozen surfaces of lakes, rivers and reservoirs across the ice belt represent the final frontier in angling. Ice thicknesses that are often measured in feet, air temperatures that hover near zero, and frigid winds that often carry frozen precipitation all represent physical, and even psychological barriers to ice fishing success. Over the last 5 years, however, advances in marine electronics that were initially designed to assist open-water anglers have begun to breach the final frontier, providing shelter-bound ice anglers the technological advances they need to enjoy sustained success throughout the months-long hard water season. As the first intrepid anglers begin to creep onto frozen lakes this season, we caught up with noted guide and angling technology expert Dr. Jason Halfen, to tap his insights on how marine electronics can best be applied to ice fishing situations.

"Whenever I lead groups onto the ice, we always carry a set of three tech tools to help us find and catch fish. This trifecta includes a portable, digital sonar/GPS combo with an installed GPS mapping chip, mechanical flasher unit for each angler in the group, and set of underwater cameras to visualize activity beneath the ice," began Dr. Halfen, who owns and operates The Technological Angler (www.technologicalangler.com), a company dedicated to providing technology training to contemporary anglers.

"Each component of the technology trifecta has a specific purpose, and this unique combination helps my groups find and catch more fish throughout the season." We continued our conversation by exploring the role of each component of Halfen's "Tech Trifecta" in more detail. 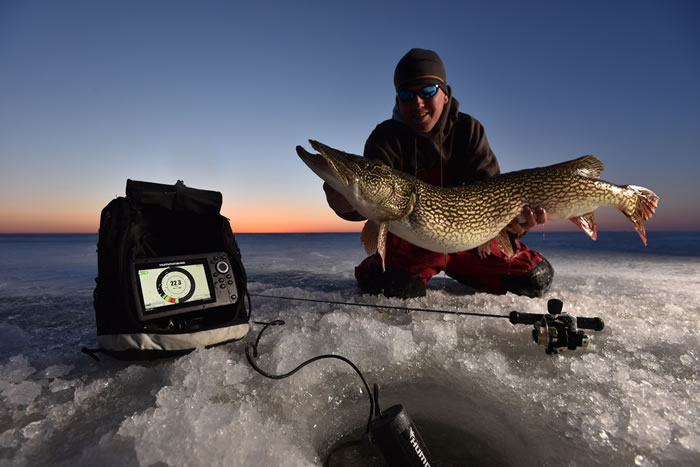 Photo by Bill Lindner, courtesy of Lake of the Woods Minnesota and Arnesen's Rocky Point Resort

Dr. Halfen explains, "A portable digital sonar/GPS combo, like the new Humminbird ICE HELIX 5 SONAR GPS, is the command center for my groups of ice anglers. The GPS feature, combined with digital cartography from my Humminbird-LakeMaster chip, helps us to rapidly identify key locations to target panfish by day, and other areas to chase walleyes during low light periods.

"For example, we use the LakeMaster-exclusive Depth Highlight feature to identify key basin areas, 25-35 feet deep, that are filled with crappies all winter. Likewise, the precision depth contours provided by my Humminbird digital cartography allows me to find distinct breaklines that separate the basins from shallow weed flats, transition zones where walleyes hunt as the sun hits the treetops."

However, the advantages of the ICE HELIX 5 SONAR GPS extend well beyond cartography. Dr. Halfen continues,"one thing I really like about the new HELIX is that I can move it seamlessly from my boat to the portable ice shuttle, using the same convenient set of power and transducer connections. Why does this matter? It allows me to take my HELIX on the water, before the lakes lock up, and drop waypoints on key "spot-on-the-spot" locations where I will turn to put fish on the ice, and smiles on anglers' faces, all winter."

During my conversation with Dr. Halfen, it struck me that nearly all anglers are already carrying a GPS device with them, right in their pockets: their smartphones. So, I asked why anglers should consider a dedicated marine GPS for their ice fishing needs, rather than just rely on their phones. His rapid response makes a LOT of sense. "First, recognize that plotting your GPS position on your phone, any displaying any available mapping, really chews up your phone's battery. Coupled with typical cold air temperatures, using your phone's GPS feature will dramatically reduce your phone battery lifetime while on the ice. Second, have you noticed that your smartphone is smaller than the holes you are fishing through? I've seen enough phones fall through the ice to know that phones belong in pockets, not in gloved hands trying to locate waypoints. Avoid sending your new smartphone to a watery grave by relying on your HELIX 5 for all of your GPS needs."

Once likely spots are located and holes are drilled, the ICE HELIX 5 SONAR GPS command center seamlessly transitions into sonar mode to help anglers monitor fish, and baits, beneath the ice. "All Humminbird digital sonar/GPS combos feature a dedicated ice fishing mode, which displays 2D sonar data on the traditional, circular "flasher wheel" display that we all grew up with during ice fishing's infancy. However, the ability of the ICE HELIX 5 SONAR GPS to also display that same sonar data in a standard, open-water type display that provides current AND historical sonar information can be invaluable for identifying exactly how fish are responding to particular jigging motions. That historical information can make all of the difference on a slow bite day, and that's an extremely valuable insight that a mechanical flasher cannot provide."

Every army needs both a commander and a set of highly trained foot soldiers. In Dr. Halfen's "Tech Trifecta", the Humminbird ICE HELIX 5 SONAR GPS is the commanding officer, while a platoon of Humminbird ICE 55 and ICE 35 flashers carry the tech burden of finding and catching fish onto the icy battlefield. With such a heavy emphasis and reliance on the HELIX, I asked Dr. Halfen why he would outfit his clients with mechanical flashers like the Humminbird ICE series, rather than handing each their own digital fish finder. As always, his answer is rooted heavily in the exacting physics of sonar science.

"It's really all about the sonar frequencies that each unit is transmitting. Put too many units, all transmitting the same sonar frequency, in too small an area, and nobody is going to be able to see anything as all of the units will be interfering with each other. My HELIX 5 sonar/GPS combo transmits standard open water sonar frequencies of 200 kHz and 83 kHz. In fact, if you look across all of the ice fishing sonar units available today, nearly all transmit at 200 kHz. This leads to a heavy reliance on noise filters and interference rejection schemes, which sometimes work, but oftentimes don't. I prefer to address the problem at its source, rather than try to eliminate pesky, and persistent, sonar noise.

One particularly compelling feature of the Humminbird ICE flashers is that they transmit a pair of frequencies that are unique in the ice fishing world: a wide, 240 kHz beam and a narrow, 455 kHz beam. This means that an angler using a Humminbird ICE flasher simply can't interfere with an angler using the ICE HELIX 5 SONAR GPS because the two sonar units are transmitting completely different sonar frequencies. Moreover, I can add a third angler with an ICE flasher into the mix, and as long as one ICE flasher is transmitting at 240 kHz and the other is transmitting at 455 kHz, all three anglers can catch fish all day and never interfere with each other."

Imagine, three guys in one Frabill hub shelter, each with their own sonar unit, and absolutely zero interference. Not a single blip. It's not fantasy, but rather the science of modern ice fishing." 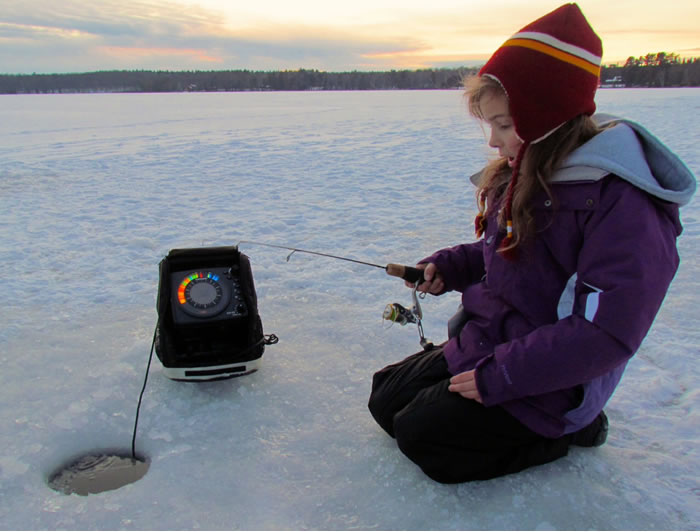 Dr. Halfen's platoon of sonar units includes both sophisticated fishfinders with GPS and more traditional flashers. Photo by the author

As valuable and irreplaceable as sonar is to contemporary ice fishing, visual information from underwater camera systems can help elevate the stream of insights delivered to the ice anglers to an entirely different level. Dr. Halfen refers to his Aqua-Vu underwater camera systems as his "spies", covertly delivering tactical ice fishing knowledge that sonar systems cannot.

"We use Aqua-Vu camera systems exclusively, in part because of their convenience and ease of use, but also because they offer us distinct advantages for finding and catching fish. First of all, systems like my Micro 5 fit completely within the front pocket of my Frabill I4 bibs. Their internal Lithium battery packs outlast even my longest days on the ice. And they weigh next to nothing, especially when compared to other camera systems on the market that seem to come with their own zip codes.

"When it comes to finding and catching fish, my Aqua-Vu camera allows me to conclusively identify bottom substrate, like telling the difference between sand and mud, which is a significant advantage when we are chasing perch that forage on mudflats. My Aqua-Vu is also the primary tool that I use to distinguish between healthy green weeds, and their lifeless, brown counterparts.

"One thing I really like to do, especially when tip-up fishing for walleyes, is to deploy an Aqua-Vu Micro 5 a few feet away from my bait, so I can visually monitor it during the day and into the evening. The first time I did that, I was SHOCKED at the number of fish that inspected my baits but refused to bite. My Aqua-Vu Micro 5 alerted me to the fact that fish were present and active, but perhaps not responding well to the sucker minnows I was using for bait. This was my cue to switch over to shiners, and that little change was all that was needed to start putting white tips on the ice." 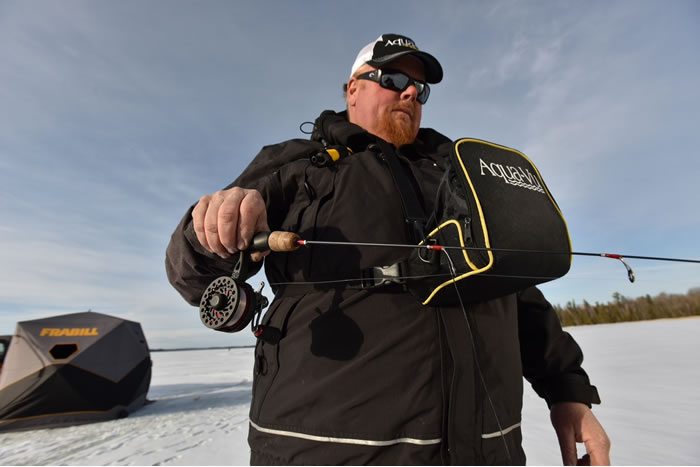 If sonar is the "yin", the underwater camera is clearly the "yang". Aqua-Vu's exceptional Micro series has become even more practical and useful with the introduction of the Micro-Mobile Pro-Vu Case. Photo by Bill Lindner

The Science of Modern Ice Fishing

Ice fishing has evolved well beyond its early days of chisels to cut holes and lead weights to estimate depths. The technology explosion that has revolutionized open-water fishing now stands on the threshold of frozen lakes, fishing's final frontier. These tech tips from Dr. Jason Halfen will help you to tap into that torrent of electronic fish-finding information, so that your ice fishing adventures this winter are met with a bounty of hard water success. Learn more about the ways that modern technology can improve your fishing by visiting www.technologicalangler.com .
Maynard Lee
BITS & BITES
Advertise here
Advertise here
Please take a moment to visit our sponsors. Without them we would not be here.