By Jerry Carlson - December 12, 2015
It was clear we had the lake to ourselves as we drove into the landing and looked out over the frozen landscape. This out-of-the-way body of water received little pressure during the winter months, especially midweek.

As we unloaded the four wheeler, I explained to my fishing partner about the process we would be using to locate fish. I wanted him to understand that working deep basin crappies was quite different than trying to catch the shallow, weed oriented gills he normally targeted on the lake near his home. 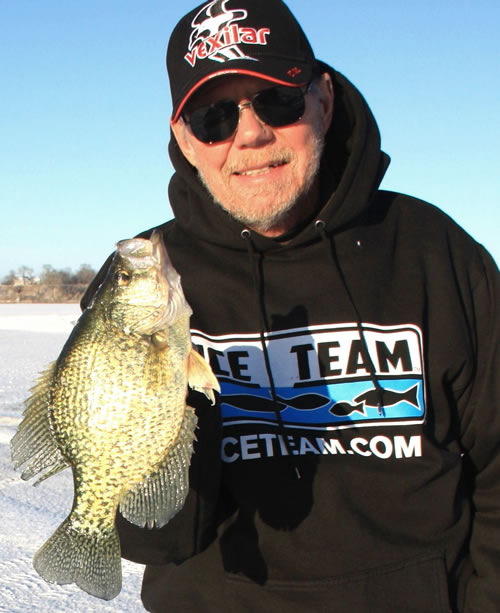 Once at the crappie hole, we found a smattering of old holes that had obviously been used the night before by a group of anglers. As I popped them open with the electric auger, I got my friend to start checking for suspended fish.

Seeing fish on a Vexilar screen was not something he was used to. The weed oriented fish he typically caught were rarely seen on the electronics. He was used to dropping down and waiting them out.

As I cut a few more holes in the vicinity, I kept an eye on him as he meandered through the area looking for fish. I could see his level of excitement rise as he discovered suspended crappies in many holes.

By the time I was finished drilling out the area, he was reeling up his first fish and then another. When that spot dried up, he moved on to other holes that showed suspended fish. I could see it wasn't going to take this angler long to appreciate the merits of deep basin fishing.

Targeting deep basin crappies and sunfish is my primary game plan during the winter months. This process has worked for me on dozens of lakes across the region I fish. It is not a foolproof strategy but one that is easy to work with.

The deep basins I am referring to are not difficult to locate. Lake maps will quickly show the deep pockets that are found within a lake. Generally, these deep basins are in the 20 to 40 foot range. Twenty-five to 35 foot depths are ideal.

Unless the lake is ultra-clear and supports weeds during the winter, panfish are forced to deep water once the shallow weed growth dies off in the fall. This deep water sanctuary provides a place to hide and an abundance of plankton and invertebrates to eat.

Many times, these deep basins are readily known and will have a cluster of ice houses on top of them. I find these shanty towns to be excellent places to do some snooping. By taking readings through the ice with the help of a little water, it doesn't take long to determine if there are fish present.

In locations where there is not much activity, I will also use the water on the ice trick to speed up the searching process. If suspended fish are present, they will show up clearly on my electronics. If I don't locate fish, I move on.

When looking for fish, I usually do not target the very deepest part of the basin. Instead, I like to search the areas just off of the deepest region where things are beginning to shallow up. Searching this upward slope is an important location strategy.

Once fish are found, they will rarely stay in one place. Deep water bluegills and crappies are real roamers. That is why it is important to drill quite a number of holes and then follow the fish as they move through the area.

Getting these deep fish to bite during daylight hours can be tricky. I find that tiny jigs tipped with Euro larvae is a good way to start. Tungsten jigs are very heavy for their small size and are standard fare. On some days, plastic will work as well or better than live bait. Maki plastics are my first choice.

Light line is critical. Almost all of my deep water fishing is done with two-pound-test Berkley Micro Ice. This line is tough but very limp so it hangs straight. Heavier line simply will not work.

I never use a bobber or float. Instead, I utilize a spring bobber or a tightline jigging presentation to feel for bites. These deep fish are rarely aggressive so anglers must be prepared to deal with subtle bites.

Targeting deep basin panfish in the winter has been a great strategy for me. It is not foolproof, but it does work on the majority of the lakes I fish.