Be Prepared For Early Ice

By Scott Stankowski - December 4, 2015
The early ice season will soon be upon us and anyone that wants to get out before vehicles are able to hit the hard water needs to think long and hard about safety issues when it comes to fishing.

Now I have never set foot on 2 inch ice and do not think any fish is worth that, but four to six inch ice is what I consider first ice. Due to uneven ice conditions I will not venture out until it is at least this thick and I still get to enjoy early ice conditions.

This is the time of the season where fish are much easier to come by and entice to bite. A fisherman has to have a stealthy approach into setting up and be prepared for danger.

With the ice just forming the water temperature is going to set up to be consistent throughout the next couple of months. The coldest water will be right near the surface and next to the ice while the ‘heavier’ warmer water will be lower in the water column. Water is the only thing we really know of that follows this as semblance of logic . 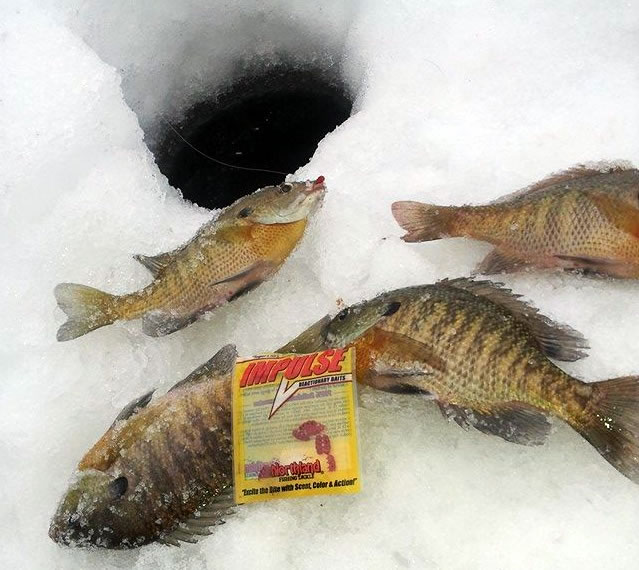 With plenty of light still hitting plants, they are still green and producing oxygen. This should be the first place anyone targets fish of virtually any species. Early ice is the time of the year to be able to catch multi-species out of the same hole. In fact about the only thing one has to do is bring multiple styles and types of baits.

This comes of some great use as if the ice is of only walking thickness, a fisherman has the ability to see what is underneath to some extent. That means the fish have the same ability and will respond to pressure as much now as ever. Just like when vehicles cross near you later in the year and the bite shuts down so too will it happen during this time of the year with people moving around.

With that being said, a fisherman has to have a little bit more patience when it comes to setting up and waiting for the bite to start.

The nice thing is that many of the lakes we fish on during this early time have less pressure. This allows me as a fisherman to spread out. What I mean by that is that I drill as many holes as possible so I will not have to do it later. I especially like to set up the tip-ups nearby so that I do not need to go running all over the place once a flag goes off. That has the ability to shut the bite down if you are targeting bass or walleyes.

Pike on the other hand seem to bite better if there is a disturbance. If I get up and run after one flag , I can almost be sure to bet in the early season that other flags will pop. In fact I am not hesitant to make some noise on the ice if I am not getting any action for northerns.

The fun really sets in when you set the hook on a fish and are able to see it underneath you. The reality of the setting really hits home and I am always secure in knowing that I have a planned system in case something goes wrong.

No ice is safe ice and early ice is even more so that way. Warm spots of water, springs, and bottom structure all play a role in how thick the ice forms. The underside of the ice is not as flat as the surface and a fisherman has to realize this.

There are a lot of occasions where I have taken a life jacket on the ice. Now that I have a personal flotation suit I do not take a life jacket. I do carry a pair of homemade ice picks in case I fall in and a rope with a boat seat cushion. Once I have established where I am fishing and am comfortable with the ice where I am fishing I ditch the rope and cushion, but only after I have drilled all my holes.

I have a spare pair of clothes back at port and always let loved ones know where I am. In addition I keep my phone in a waterproof bag.

You have to be prepared for early ice before it happens. It can end as soon as an inch or two of snow falls and creates a shade cover that sends fish scrambling as oxygen conditions change. The window may be short so be ready.