By Bob Jensen - November 7, 2015
It happened again recently. We had a great plan for catching fish and the fish just didn't get with the program that we were presenting. We changed our program completely and caught'em: Caught'em good. Here are the details. 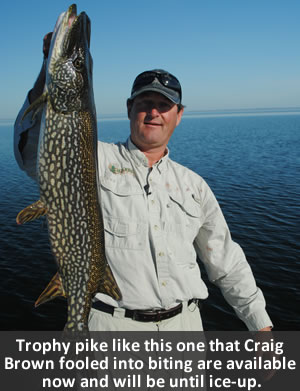 We were on Lake Winnibigoshish in north central Minnesota. My fishing partners were Craig Brown and Kyle Waterman. These guys both know their way around a fishing pole: Craig and his wife Paige own McArdle's Resort on Winnie, and Craig spends a lot of time fishing there. Kyle is involved in developing new lures and other things at the nearby Northland Fishing Tackle Company.

We were after northern pike. Craig has been in on this bite for years. In the fall, hungry pike follow the baitfish into the shallows and feed aggressively. The best spots have a sand bottom with scattered weeds. The key is finding the baitfish. Find the baitfish and you find the pike.

The traditional way of fishing pike this time of year is to throw big baits on heavy equipment. We started off doing that, and we caught some fish. In fact, Craig took a pike that was in the fifteen pound category. However, action wasn't as fast as we thought it should be. We covered a large area that had been productive in the past with all sorts of big lures, but we just couldn't get them to go like we thought they should. Craig had a back-up plan. His back-up plan was an extreme departure from our original plan, and it was a successful one.

We moved to an offshore structure. It was a big sand flat that broke sharply into deep water. The depth went from fifteen to thirty five feet in just a short distance. The only thing similar to the previous area was the presence of baitfish: This structure was also home to huge schools of baitfish that showed up as clouds on the sonar.

Here's where things got very different. We switched from rods with the action of a pool cue and fifty pound test braided line to walleye spinning rods with eight pound test line.

We switched from baits that were several ounces in weight and ten or twelve inches long to 3/8th's ounce jigs that we tipped with plastic baits that were five inches long. We sometimes made short casts, but mostly fished the baits straight up and down below the boat. And we caught pike: Lots of'em. Not real big ones, but very fat twenty four to thirty inchers. These pike were so fat they looked like they would explode if they ate another perch. And, with the lighter action rods the fight these fish provided was nothing but fun. Anyone would enjoy this type of fishing. 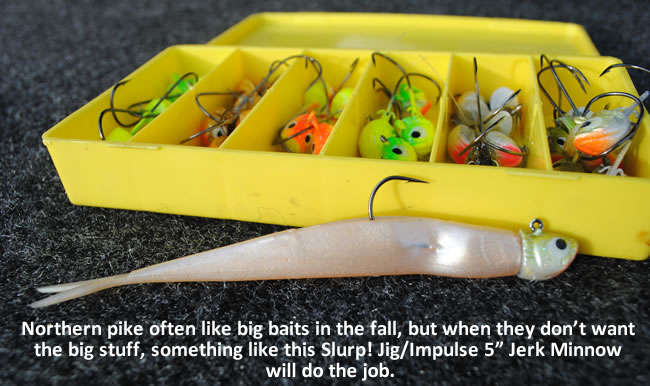 The presentation that was most productive was a 3/8th's ounce Slurp! Jig with a five inch Impulse Jerk Minnow. Smelt was the best color for the plastic, but other colors also produced. The key was keeping the bait off the bottom. It needed to be at least a couple feet up. These pike were hungry and willing to move for the bait, but as it is with most fish, they're more willing to move up than to move down to eat. Once we got on the fish and had the presentation figured out, it was "Bent-Rod City" every few minutes.

It's a good idea when we go fishing to have a plan, but it's also a good idea to be willing to switch plans. If you're willing to try different things, much of the time you'll catch more fish.